An early start. For us at least — 6 am. A beautiful clear sunny morning, the car was packed by 7.15 am and with little or no traffic, we reached the ferry terminal just before 8 am. We were third in line so perhaps we needn’t have shelled out $15 for the reservation fee… Anyway we had plenty of time to grab a coffee and a croissant from Salt Spring Coffee Company. Mmm – coffee by the sea.

We drove onto the ferry at 8.30, and we set sail on time at 9 am. Now all we had to do was sit back and watch the scenery glide by; a chance to look for eagles in the trees and seals in the water. No eagles today, and just a couple of very brief seal appearances. We hit the Island at 10.30 am and set off on the long drive towards the campground. Our route skirted Victoria, through Goldstream Provincial Park (where we watched the salmon run last year), on through Duncan (the city of totem poles) and up to Nanaimo, where we’d spent the Easter weekend. (Had we but thought we could have saved ourselves a lot of driving by taking the ferry to Nanaimo instead…)

Lunch was a few miles north of Nanaimo at Rathtrevor Beach Provincial Park where, sandwiches in hand, we braved the hot sun. Back on the road we hit the fastest stretch and made good time up to Campbell River (while keeping our eyes open for Roosevelt elk), where we stopped to refuel and grab some beer (naturally).

From Campbell River we headed inland towards Strathcona Provincial Park, winding our way up into the hills, which became mountains. We were really surprised: we didn’t expect such high, impressive-looking mountains on Vancouver Island. Some even had their own glaciers. Our first stop at the Park was the Buttle Lake campground to see if there were any free tent pitches, since we were unable to book anything at such short notice. A quick drive round and we got that sinking feeling: there were no free sites. Oh, oops. So what next? Head towards the other campground, Ralph River (which didn’t accept reservations anyway – at least at that time), on the off-chance that we might get a pitch there. On the way we passed the park information centre: a hut with one old guy sat outside. We stopped and chatted and he told us that Ralph River was a much nicer campground anyway and that there were loads of spaces. He also told us where the good hiking trails were, showing us on the park map, which had us itching to get at them. We were so glad we stopped: he was only there on weekends. 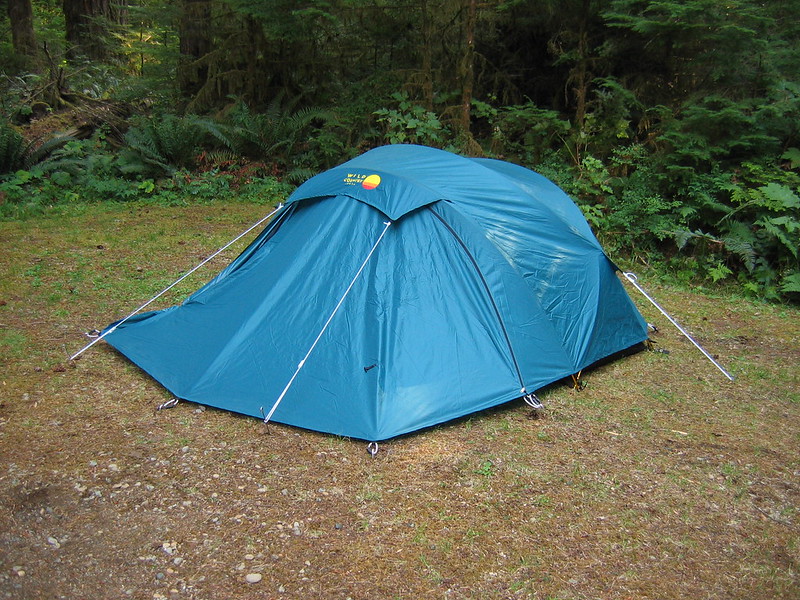 Ralph River was a much nicer campground. Quieter, more secluded pitches, especially where we pitched, along a road lined with old-growth fir and hemlock, moss dripping from every branch. Wow! And the surrounding mountains: double wow! After paying our camp fee, we had no trouble finding an empty spot and set about pitching our tent. Then we noticed the “Bear in Area” sign at the water pump (you read that right – the water had to be pumped by hand!). It was dated yesterday. Oh, gulp. Well, it made us more than a little wary and careful not to spill any of our tasty dinner. Speaking of dinner, we learned one of the lessons of cooking with small gas canisters: take more than one. Especially when you are in the middle of nowhere.

We washed up and took a wander down to the edge of the lake at dusk where we sat watching the colour of the sky change from orange, through pink and purple to dark blue. Before it got too dark we made our way back to the tent, back through the long grass and small bushes, careful to avoid the numerous little toads hopping left, right and centre. Oh, and keep talking — this was bear and cougar country after all… But we were beginning to feel that we were on holiday, and got ready to bed down for the night, taking care with the toothpaste: like everything else smelly it had to be put back in the car. Apparently bears like minty things…