Dreams of bears and unusual noises made for a restless night.

Surely it should be easier to get up early when camping? The dawn light streaming into the tent, the lack of an alarm clock. Somehow it never works like that. But just because we were camping, it didn’t mean we had to skimp on breakfast. Orange juice, hot oatmeal and freshly brewed coffee (double-bagged of course so the bears didn’t get a whiff). Mmmmmm. The sun eventually made its way over the ridge and we were bathed in warm sunshine. Time to work out what to do with the day.

Well that was an easy decision – let’s go for a hike. But which one? We decided on Flower Ridge since the trail head was barely 5 minutes down the road. The hike is 12 km out-and-back (only 7.5 miles) with about 1200 m of ascent (about 3900 ft), which gives an average gradient of 20% (or 1 in 5). That seems quite steep… better get on with it then. It was a beautiful day and the hike promised a view at the top. We set off through the salal bushes, making suitable amounts of bear-deterring noise as we went. That’s not always easy when you’re slogging up a steep hill: you quickly run out of breath. 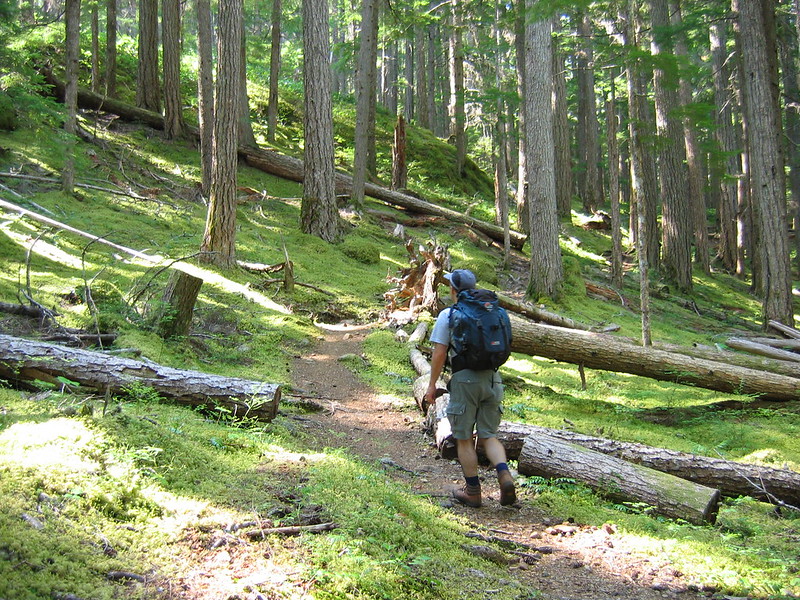 Walking in the woods is nice. But a view is nicer. Especially on a clear, sunny day. An hour-and-a-half later we stumbled onto our first view. And what a view — of one of the biggest eyesores we’ve ever seen: the Westmin mine. And in a provincial park, too. Fortunately it wasn’t our only view, with Mt Phillips still towering off to the north-west and even a glimpse of Buttle Lake. Here we also tackled a heavenly sesame-seed, almond and honey bar from a Greek bakery a couple of blocks from home. Refuelled, we pushed on upwards, encountering some late wildflowers.

“Are we there yet?” It looked close. (It always looks closer than it really is.) We met some hikers already on their descent! The next stage was a bit tricky. As the trees start to thin out the trail became steeper and the surface turned to loose shale — tough to go up but we were more concerned about coming down. This kind of surface made us wish for trekking poles. Finally, we emerged in the subalpine region: meadows of heather, blueberry, huckleberry and small thin subalpine firs. And views. Or at least, promises of spectacular views soon to come. Still a bit further to go to get onto the flat top of the ridge but within another 10 or 15 minutes the views were ours. 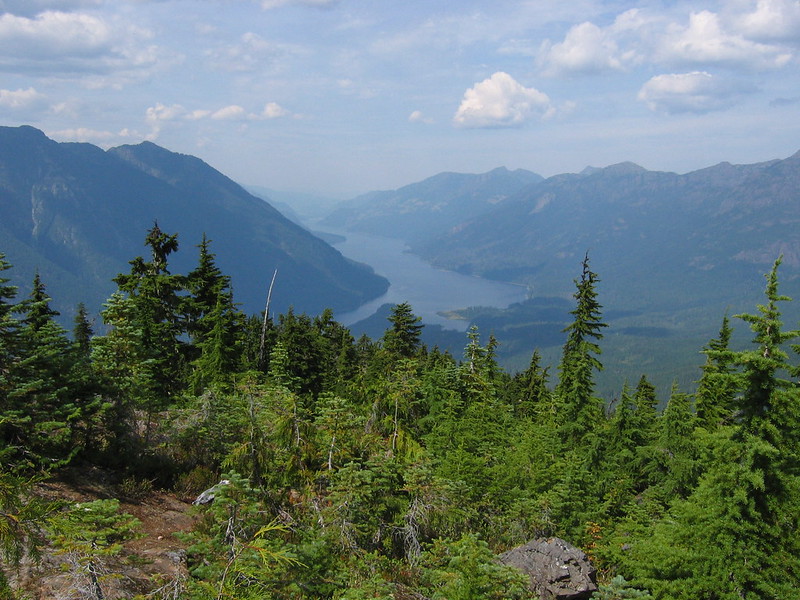 And what views! 360 degrees, mountains everywhere, spectacular valleys, snow pack and glaciers too. Wow! And that sun was hot! Now we took our time, meandering over the ridge, gawking at the views and sizing up photographs. And we had it to ourselves — there was no one else around. Silence; just the breeze (and the occasional bee). We found a little shade and plonked ourselves down for a well-earned lunch. Dessert came courtesy of Mother Nature: tasty blueberries, and even more delicious black huckleberries!

At some point we figured we should head back down. Reluctantly. The descent was steep: we negotiated the loose stuff at a snail’s pace and made our way steadily back down to the car. By the time we were half way down, our knees were well and truly grumbling. We should have made more bear noise but it was too peaceful among the trees and we just settled into a quiet rhythm. When we reached the car we peeled the boots and socks from our hot feet. Next stop was the lake and we drove up to the Karst Creek boat launch for a wash cool refreshing swim. The water was welcome in more ways than one: a persistent horse fly wouldn’t leave us alone so the only solution was to get in and leave it behind! 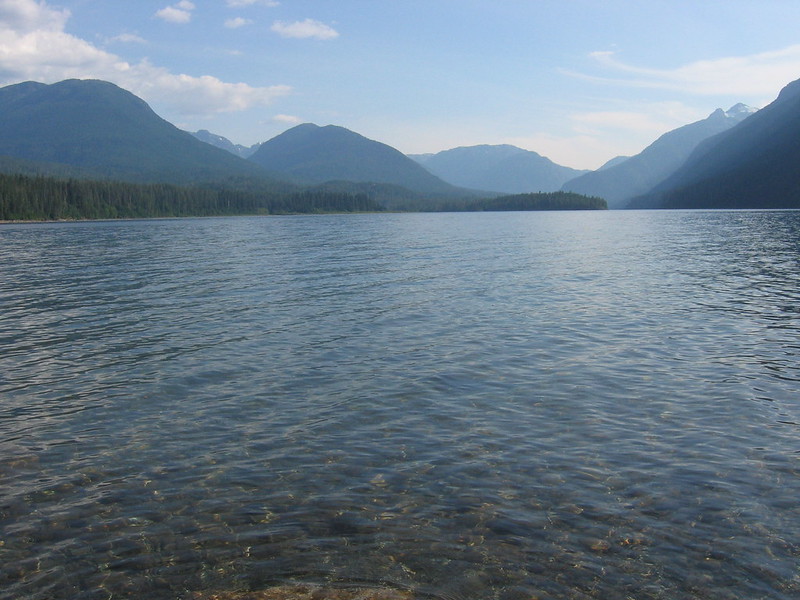 Dinner had us wondering about our low gas supply. Fortunately there was no camp-fire ban so we merrily bought some wood and borrowed the camp host’s axe to reduce the firewood to kindling. Oh yes, this is what being in Canada is all aboot: lumberjacks are us! Woohoo! Where’s my plaid shirt? OK, so now we had all this chopped up wood, the next question was how do we turn that into a blazing conflagration on which we toast our … marshmallows? That was the fun part. The camp host told us to light the fir first, and after that the cedar will catch (much harder to burn cedar). That was in theory. In practice it took, ooh, an hour of trying (not to mention the odd expletive) and 4 false starts to get a fire going. Now I understood how Tom Hanks felt in Cast Away. Between this and the hand-pumping of water we were really beginning to feel well and truly away from it all. Dinner was cooked over the fire of course. We celebrated by heading down to the lakeside with our camp chairs and two well-earned bottles of beer where we watched the moon rise over the mountains and the stars come out to keep us company. Wow.