Day 3 dawned another beautiful sunny day. We managed to get up a little earlier than yesterday and got ourselves out quicker too. So then, what to do with today… I know, let’s go for another hike! This time, we decided to go a little farther away to tackle Crest Mountain. We had been helpfully warned by the park guide we spoke to on Saturday that the Crest Mountain hike was no picnic: almost 2 Grouse Grinds, he said. A slight exaggeration but it was even steeper than yesterday’s hike. The distance was only about 10 km (6 miles) round trip (depending on how much wandering around we did at the top), but the elevation gain was 1250 m (4000 ft). All this in the name of training for The Lions? Maybe — but there wasn’t much choice if we wanted a view, since all the mountains were about the same height.

We set off a little after an older couple from California (the only other car parked at the trail head). The trail was wonderful. We started off in the woods as always, crossed a small bridge over the join between the two Drum Lakes and headed into fabulous old-growth forest. We began to climb almost immediately (no warm-up here), through salal bushes again. After about 1 km we encountered the bridge over Crest Creek. The crossing was described to us as a little hairy but it was easy. The creek wasn’t very big and the only thing to watch for was the fact that there was a railing on one side only. The bridge was a wonderful old cedar which looked like it had fallen naturally. Very photogenic.

After the bridge we continued to climb, leapfrogging the older couple a few times. It’s funny who you meet on the trails. Some people are chatty, others not. This couple was not, so each time we passed it was barely a hello. To be fair, it was a steep climb and we didn’t have much breath for talking ourselves. Eventually we pulled away from them and had the trail to ourselves. We climbed and plodded, plodded and climbed. It was steep, and we encountered the same loose shale as yesterday which we knew would be tough to come down. 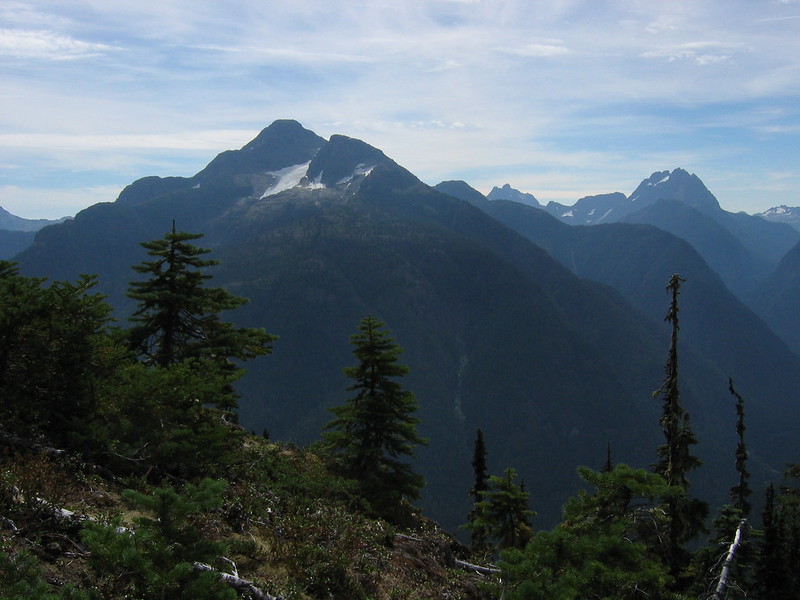 After two solid hours of trudging uphill we reached the subalpine zone and were rewarded with our first views. And what views! Across the valley was the spectacular north face of King Mountain, complete with icy-blue glacier. One of our bags of blueberries disappeared in record time. The subalpine zone was beautiful. Here is where the flowers were, the plants were smaller and trees are slimmer to cope with the snow. And with the warm sunshine evaporating the oils from the trees and shrubs, we were now on a wonderfully scented trail. The gradient eased and the ground became drier and sandier: a delight to walk on. This reward for our efforts was invigorating and we pushed on for the summit. Thirty minutes later we reached a small tarn nestled in a hollow between small ridges of rock.

This was the summit. Well, almost. We were at a wide open plateau and the obvious trail we had been following all morning disappeared into the heather. We ventured east to look for a lunch spot, and wandered about for 20 minutes or so soaking in the views. Then we noticed that the actual summit was behind us, and still a small climb away. We headed over to it following established animal trails in the heather as much as possible. The trail had a lot of small ups and downs, with blind crests and little hollows. We kept up the bear and cougar chatter: we didn’t want to surprise something as we made our way over one of those blind crests! As we got closer we noticed bits of orange tape in the trees: we had joined the real trail which we followed to the actual summit of Crest Mountain.

The summit at last! Unmissable thanks to the very odd pointy thing, about 12 feet high and shaped like a rocket. Okay… But the real treat: a full 360-degree panorama, mountains as far as we could see. And again, we had it all to ourselves. As we descended to another tarn to have lunch, we saw a vast plateau stretching out before us, just begging to be hiked all over. Another day perhaps. We sat down to enjoy tuna sandwiches and learned that wasps really like tuna. As the wind was in our faces (blowing tuna smells far and wide behind us) we kept an eye out for any sounds or movement which could cause us to abandon our lunch mid-bite… 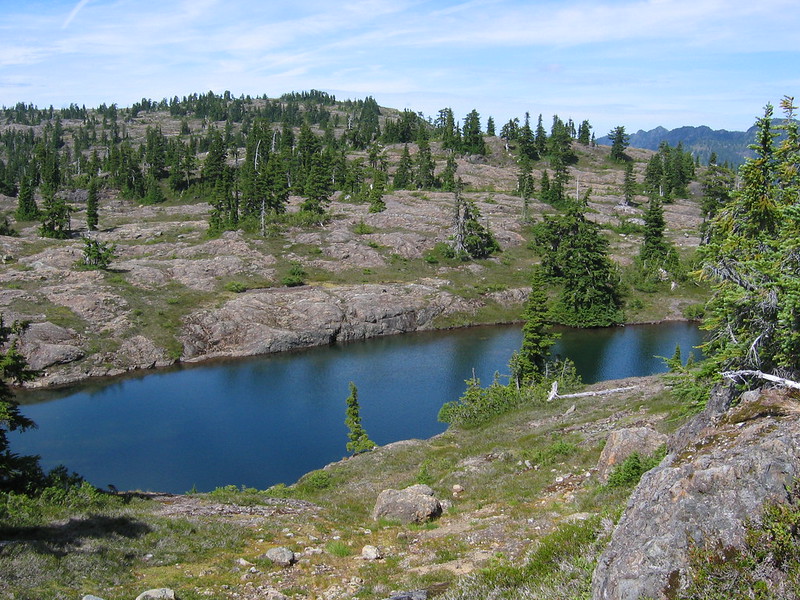 It was too beautiful to leave. But after nearly 2 hours, we put our packs on and took a steady wander back from our lunch tarn, over the summit and down to the first tarn again. We stopped to dip our hats in the cool water and then head back down. We spotted the couple that had started out just before us and we met up and exchanged a few more words this time. We were glad to see that they’d made it OK. Our descent was slow: too many things to take photos of! They passed us and we don’t see them again until we get back to the bridge. A couple of groups passed us heading up — we were there at the perfect time. One of the groups had a jet-black Dixie.

Sure enough the steep, loose sections come back to haunt us. We both slipped a few times, but Maria came off much worse on one her slides, with only the jagged branches of a dead tree to stop her. So now she had a nice graze on her leg, which we treated as best we could and continued down. Eventually we got back to the decent trail section with its many knee-knackering switchbacks and with some relief we reached the bridge. After devouring a bag of grapes we set off back to the car. What an exhilarating hike! 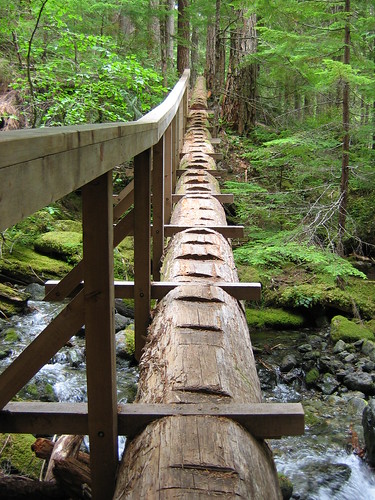 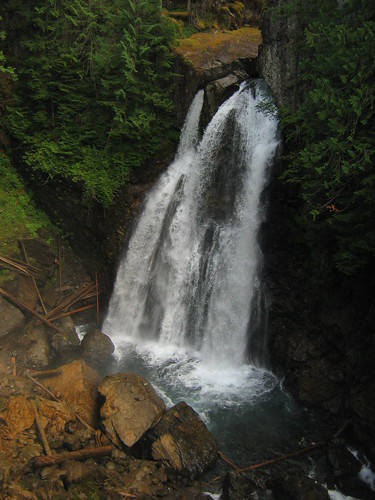 So we were on a high and weren’t yet ready to return to the campground. Time to do a little gentle sightseeing. Our first stop was the Elk View overlook, which was a horrible little trail under the power lines to a viewpoint where the resident elk herds can sometimes be seen. Usually at dusk or dawn. In spring and autumn. But not today. Our day of solitude on the mountain had left us impatient at the spoilt-brat tourists and we couldn’t get away soon enough. We stopped at Lady Falls, and were happy to see the unpleasant group drive straight past. We made short work of the 1 km trail to the falls. They were well worth seeing — a 90 foot drop into a rugged plunge pool which drained into a deep, narrow canyon. The viewing platform was a feat of engineering though, and extended out into the canyon to ensure the best view. This meant you had a similar drop directly beneath your feet…

One of the things about camping in bear country is that you leave nothing in your tent. This meant that we had all our food with us and we headed back to the lake to boil some water for our one-pouch dehydrated meal. As food experiments go, it was actually pretty damn good and we needed every calorie.

Sitting back afterwards with a hot chocolate we heard a park ranger emptying the bins. A moment later we heard an even louder crash and bang, which sounded like a skip full of bricks being dropped from a great height. We looked at each other for a minute trying to work out what it was. It appeared to come from across the lake too — must have been a rock fall. As we went back to the car we stopped and chatted with the ranger whose first words were, “Did you hear the rock fall just now?” Aha — mystery well and truly solved. This one was in Marble Canyon which surprised the ranger: she said that it’s Mt Phillips that is falling apart. That’s reassuring…

It was getting dark by now so we headed back to the tent to grab our chairs and beers and went back out onto the grassy flats again to watch the moon and stars, alas just a few days too late for the Perseids.