Potentially the most stressful day of the holiday, because we had a ferry to catch to get to Galiano Island. So we were up and packed up in good time, and made sure to take advantage of the hot showers one last time before getting on the road. We had a long drive ahead of us back down to the ferry terminal at Swartz Bay. We couldn’t make a reservation for this ferry so we had to make sure we got there early enough to be able to drive on. The ferry was due at 4.15 pm but we had to be there 90 minutes before that in order to guarantee a spot on the boat. We had 200 km to travel in about 4 hours; should be plenty of time.

It was another warm and sunny day and we were glad of the air conditioning in the car. We called in at Nanaimo to get a bigger memory card for the camera as we’d already filled the ones we had (all of them!). Just outside Nanaimo, we stopped at a tiny provincial park which has some First Nations petroglyphs. We thought that would make a good lunch stop and set off for that. Well, we were a little underwhelmed by the petroglyphs as there was only one that was clearly visible. We took its photo anyway and headed off to find suitable facilities to enable us to drink more with our lunch (if you see what we mean). Phew! Thank goodness for well-equipped petrol stations!

By this time we were running a little late so lunch was eaten on the road. We stopped for a post-lunch ice cream at a fruit stand we’d seen on the way up. Wow, what an ice cream — it was enormous! A single scoop by their standards had about 3 scoops by ours. Suitably sugar-fueled, we set off again for the ferry and made it in plenty of time. We parked up in the queue and headed in to grab a coffee. It was hot and sunny out on the tarmac so we hid in the shade. Maria found a stall selling mini-doughnuts and we scoffed a few of them with our coffees. Absolutely delicious, and thanks to all the caffeine and sugar, we were now wired. Time to chill out again on the ferry and set our body clocks to the slower pace of Island Time. 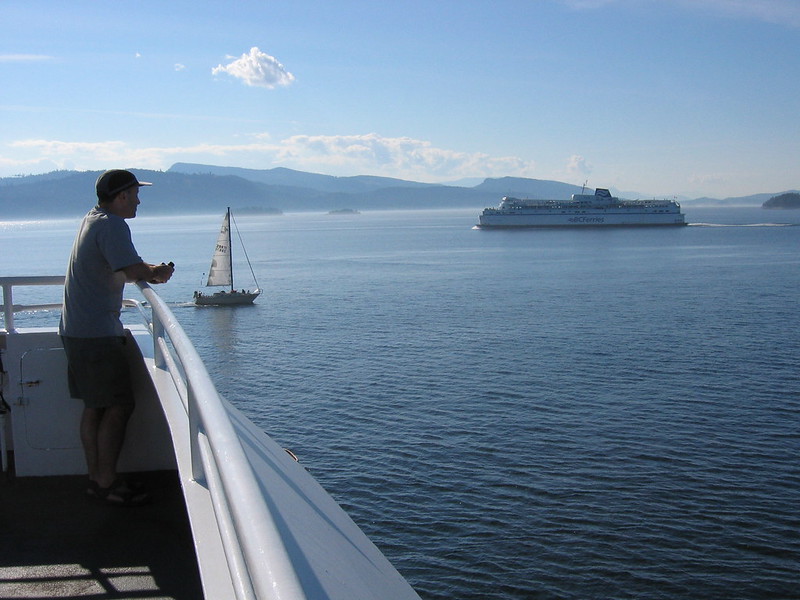 As it turned out we had plenty of time to chill out. Our ferry journey was a two-step affair, calling in on Mayne Island before heading to Sturdies Bay on Galiano, but we were delayed getting in to Sturdies Bay by more than half an hour as the preceding ferry was late. It gave us plenty of time to enjoy being on the water though. We finally docked and headed off to Montague Harbour for our last camp site. The noticeboard at the campground entrance told us which pitch we had and off we went to find it. Fortunately it was close to the car park (we’d only been able to reserve a walk-up site) so we didn’t have far to lug all our stuff up the hill. As before, our pitch was mostly hard gravel but here was something new: a wooden tent pad. So, did we fancy trying to get the tent pegs into the gravel, or trying something new? We opted for the new and before long had the tent up on the wooden platform. The gaps between the planks were just wide enough for us to use our longer and wider sand pegs to help anchor the tent, plus we had a number of spare guy ropes which allowed us to extend ours to beyond the edge of the platform. Within minutes we had a comfortable and securely pitched tent. We were impressed. :-)

Another marvel of North American campgrounds is that every pitch has a fire ring and a picnic bench. So cooking dinner had been easy all week up on the picnic tables. No bending over a stove on the ground here. With no worries about bears on Galiano Island (just raccoons) we tucked into our salmon and pasta dinner, clinked our beer bottles together and watched the last light disappear off the hill. 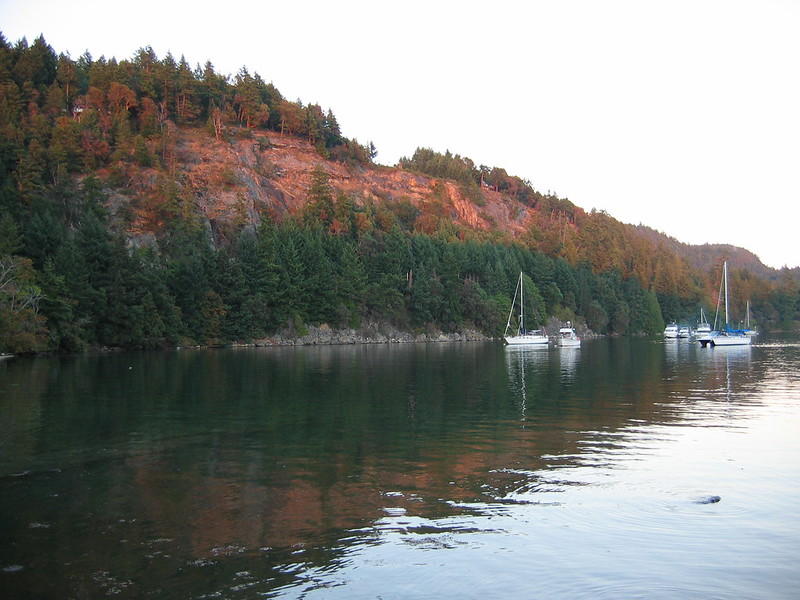 Once it was dark we fancied a wander to stretch our legs, and struck off through the campground armed with our torches (ahem – flashlights). Of course we had no idea where we were actually going but we figured that we couldn’t get lost. Eventually we came to the white shell beach that this park is known for, and came across a large group of people spread out across the beach. Naturally we said “Hello” to the first person we walked past and they completely ignored us. In a fit of DC-speak, we wondered “What’s their problem?” But then one of them started a song (or was it a chant?) and the others gradually joined in, and all began converging on one spot on the beach. We’d seen enough and we headed off back into the trees. We reached the boat launch and we pointed our torches into the water where we watched barnacles feeding, periwinkles crawling, crabs scuttling and lots of tiny fish swimming. Much more interesting than the chanting weirdos along the beach. We walked back through the campground and found our tent with no problem. Island Time felt good.