Our first night on a wooden platform was very comfortable, much more so than the hard-packed gravel of the previous camp sites. A lazily warm sunny morning tempted us down onto the beach with our coffee. Summertime in southwestern BC brings low tides during the day. That night was the full moon so it was a very low spring tide and all manner of stuff had been revealed: crabs, fish, and loads of purple sea stars. 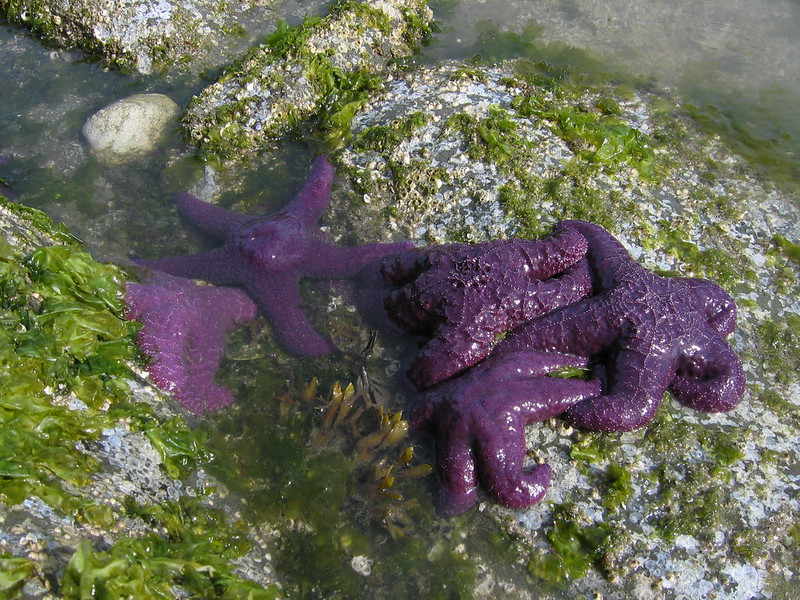 After breakfast we went for a gentle wander around the Gray Peninsula which sticks out to one side of Montague Harbour. It took us a long time to get started as there were so many sea stars admire. We found two other types too: one huge one with arms longer than my feet and a tiny one with twice as many arms as usual. Further along the trail we came across several beautiful arbutus trees. More photo-ops!

Eventually we made it round to the far side of the peninsula and walked along the exposed rocks, trying not to crunch too many barnacles. As we rounded the corner we find ourselves among mussel beds, so many we couldn’t find any bare rock to walk on. The rock had been eroded into long thin ridges and furrows, with the mussels and barnacles coating the ridges and layers of shells and mud in the furrows. I took to the mud and shells and explored a bit further. The clams buried in the mud were taking turns to squirt water all over the place, which looked funny. Until I got a direct hit in the face. Yuck! It tasted terrible and it took half of the water bottle to get rid of the taste. Still, I learned my lesson: don’t walk too close to where the clams are squirting. 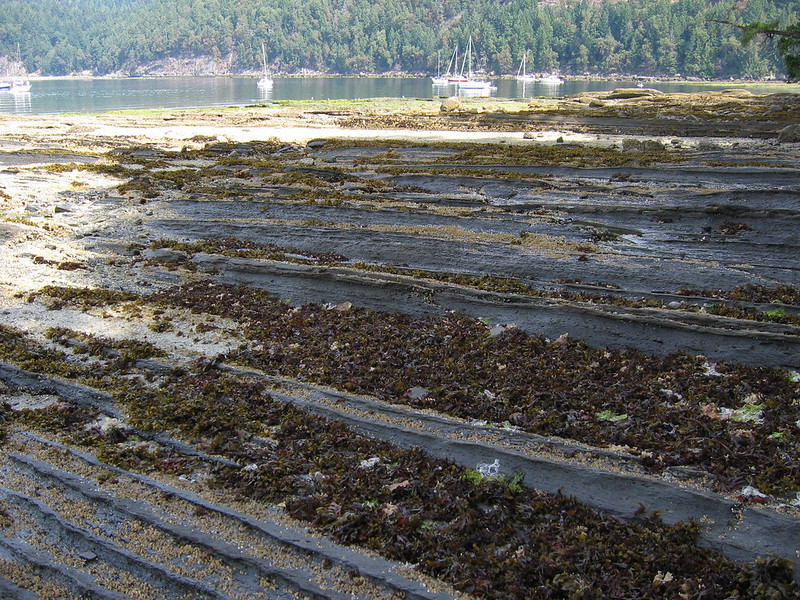 We arrived back at the white shell beach where we’d found the weirdos last night. This beach is not natural: it is the remains of a midden created by the First Nations people that harvested the clams and mussels here. So much material had collected over the years that it created a small land-bridge out to the island that is now the Gray Peninsula. We made our way back to the tent and decided to get out and explore a bit more of Galiano. Our grand plan was to drive round the island. Which turns out to be rather difficult as it’s long and thin. Well, OK so we drove up to the far end of the island, and stopped at the Lovers’ Leap viewpoint where we finished hot chocolates bought along the way. We overlooked the Trincomali Channel between Galiano and Salt Spring Islands, and used the map to identify some of the smaller islands.

Enough sightseeing — we wanted to hike! It was 3 days since our last hike and we were getting withdrawal symptoms ;-) We made our way onto Bodega Ridge which forms a large part of a spine of the island. The first part of the trail was an old road through private property, and just as we were starting to get bored we came out onto an exposed part of the ridge. Now we had views again and they were wonderful. The exposed edge of the ridge faces west, looking towards Salt Spring and Vancouver Islands. An information board informed us that this was the driest area in the Southern Gulf Islands. One of the indicators is the presence of hairy manzanita trees which normally only grow much further south in California. We reached the highest point on the ridge and soaked in the views before wandering back to the car and driving back to the campground for dinner. 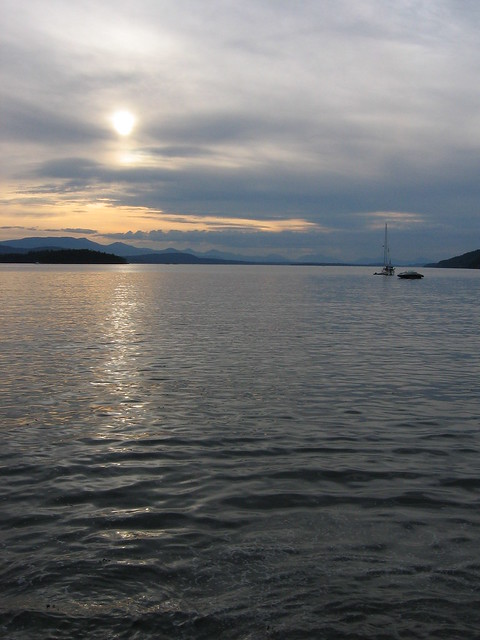 Dinner was by the beach. We parked near the white shell beach and set up the stove on a picnic table, trying to ignore the strange couple on the beach in front of us who seemed to be making a fuss over everything. OK so the tide was coming in and they had to keep moving their deck chairs and the beach was rapidly disappearing to nothing, but honestly…

We washed up and headed off for our next adventure. We’d seen an advert for kayaking tours and thought, well we’re on holiday aren’t we? So we signed up for the moonlit tour. Yup — kayaking at night! We couldn’t wait. :-)

At 8.30 pm we were on the dock getting our little intro speech from the tour guide. At first it didn’t look promising because the sunset was really hazy, and we weren’t sure if we’d see moonrise; it was a full moon that night as well. Oh well. It’ll be fun to do some more kayaking anyway. We had the option of taking two singles or a double. Well we hadn’t tried a double before so we decided to give it a try. Maria sat in the front, I sat behind. Unlike a car, in a double kayak it’s the backseat driver that steers it. In all there were five of us including the tour guide, who was the daughter of the owner.

Eventually we had to make our way back and we paddled along the edge of yet another island on our return to the harbour. We heard seals splashing, and otters squealing. Quite eery at night. We made it back to the dock for 11 pm and were back at the tent 15 minutes later. Still on a high, we put on the stove and made hot chocolate, perched ourselves on the edge of the wooden tent platform and sipped away. Apart from having to tell some newcomers to be quiet, it was a perfect end to the day.