We’ve been wanting to do this ever since we saw someone else’s photos of Garibaldi Lake covered in snow.

We got to the parking lot just after 10 am. Only a little bit of snow by the roadside and the parking lot was clear. And free :-) The parking meter was still wrapped in its winter blanket of black bin bags. We left the car at 10.30 am, heading up the trail with our snowshoes on our backs. We had to step over a log here and there but otherwise the trail was clear. After about 20 minutes or so we hit the first patches of snow, just tiny patches at first and then larger ones which eventually merge into long stretches of crusty, icy snow. The trail began its switchbacks up the steep slope, at which point the snow was too slippery to hike on. At about 2.5 km we put on our snowshoes for grip.

Crunch, crunch, crunch! The snowshoes were really loud on the icy snow but as we gained elevation the snow became softer and quieter. A couple of skiers passed us heading down: skiing on that snow looked pretty hairy to me. Before long we caught up with another group of 4 snowshoers on their way up to the lake. At 12.15 pm we reached the junction where the trail split and stopped for a break and photo op :-) The other snowshoers caught up and examined the map on the signboard wondering where to go next. We took the trail to Taylor Meadows, leaving them behind. That was the last we saw of them. (That wasn’t meant to sound so sinister!)

Our route into the meadows was defined by the people who had been through a few days earlier :-) Here and there we spotted a trail marker on a tree and so were happy that we were still heading in the right direction. By now, the snow was fabulously soft and powdery. It had snowed during the week so there was a powdery layer on top of a firm crusty snowpack. Animal prints (mostly snowshoe hare) led off in all directions. After a while, we were still following the tracks but realized hadn’t seen any markers. Well, that’s not a great position to be in but we persevered and before too long we met up with the official trail again. Phew!

The trees began to thin out as we entered a bit we recognized from the summer and then suddenly we were there, standing out in a wide open snowy space. And to our left was one of the views we had been seeking: a snow-covered Black Tusk, looking quite magnificent. We wandered around and realized we were right in the middle of the Taylor Meadows campground where we had camped last September, except there was no sign of anything familiar. A sign stuck into the snow pointed the way to the winter outhouse. 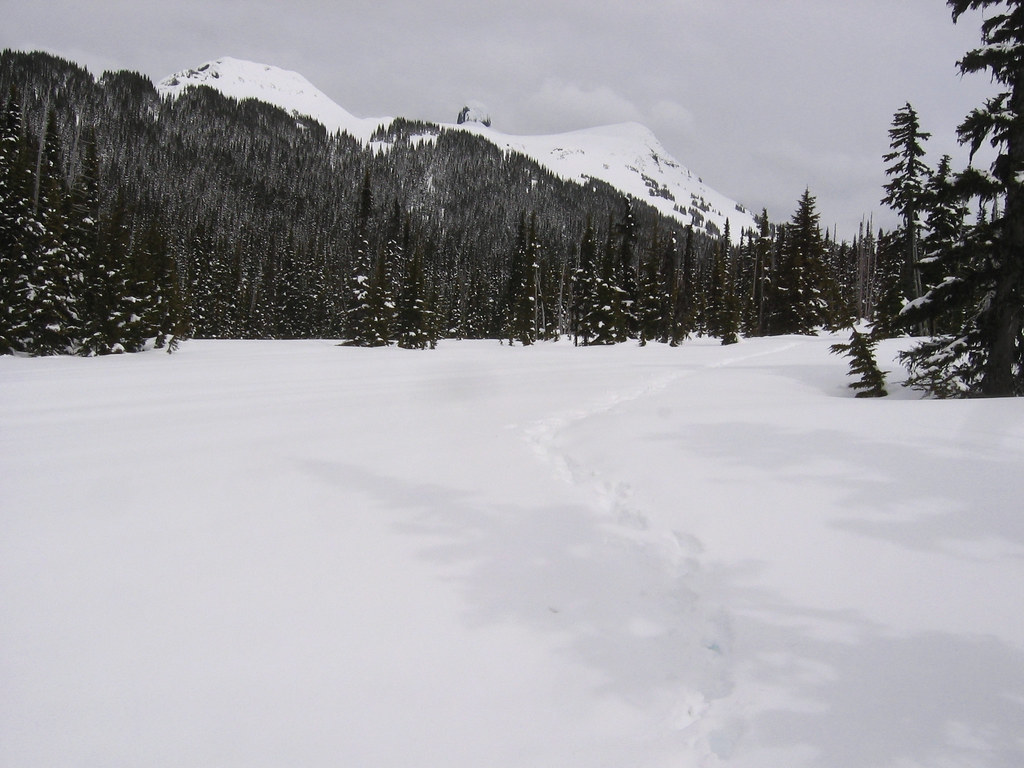 We pushed on, down over Taylor Creek (completely covered in snow) and then up the other bank to reach the old shelter. The amount of snow on top of the shelter was unbelievable! It’s no wonder that people are warned off using it. A single line of footprints led off across the open meadows, which, since they led in roughly the right direction, we followed. Plus it seemed a shame to mess up all this pristine snow :-) The views just got better and better. Open snowy meadows, Black Tusk and its neighbouring peaks. And it was silent. No one else around, no wind, nothing. Serenity defined.

At some point I noticed that the footprints we were following went in both directions so I was expecting them to run out before long. Sure enough, we came round the next corner into the next expanse of white open space and the footprints went in a circle and back the way we had just come. So what next? Our intended landmark was Outhouse Junction, but with all the snow there was no way we would recognize it. Perhaps it was time to look at the map. Triangulating on Black Tusk to the north of us, and Mt Price to the south we struck off over the meadows on a bearing towards Garibaldi Lake. We need to get a move on because the clouds over Black Tusk were looking a bit ominous, it was 2 pm and we hadn’t had lunch yet.

We reached the tree line where it was no longer possible to walk on a bearing, so our route turned to dead reckoning instead. We reached a hollow, probably a stream or small lake. At one end of the hollow, a creek obviously flowed out but we didn’t want to follow that in case of steep dropoffs. We moved away from the creek, back up the hill slightly and found a suitable-looking route through the trees. But mostly we worked by memory of the summer route, taking a zig-zag descent. The snow was great though: we just “whoomphed” our way downhill. As we disturbed the snow it pinwheeled away from us, forming big wheels or even snails (which I now know is not a good sign…). At one point we came to a downed tree and had to jump down off it. The avalanche danger was low but it was still a few feet down and we didn’t want to end up sliding the rest of the way into the next tree! I went first and with some trepidation jumped down. It was fine, no problem. Then it was Maria’s turn. Except she caught her snowshoe as she jumped and ended up face-first down in the snow. Quote: “Oh my god, that’s soooo cooollllddd!!!” :-) 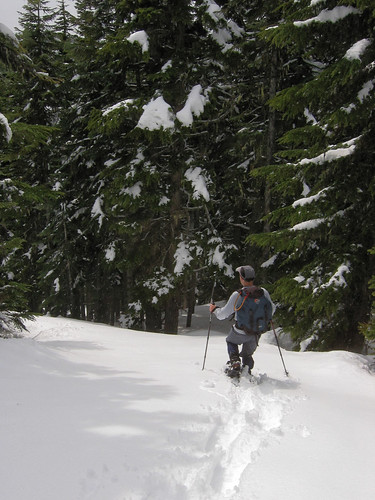 We continued downhill and saw that there was a clearing ahead. Now the slope got even steeper and was a bit tricky to negotiate. No choice but to go for it, so we end up running diagonally down hoping that our legs would hold up, or that the snow would make a soft landing :-) We made it and suddenly we were on the trail! Actually we were on top of Rubble Creek. And to our amazement, we were only a few dozen yards from the bridge that the summer trail crosses. How was that for route-finding? :-)

We turned left and made our way over to the lake. Maria braved the trolls and went under the bridge. She came out the other side so they must have been hibernating ;-) Suddenly, we were on Garibaldi Lake. Wow – we’d made it! What a feeling. A couple of skiers passed us heading down, and it was so tempting just to keep following the ski tracks out across the lake to the hut… 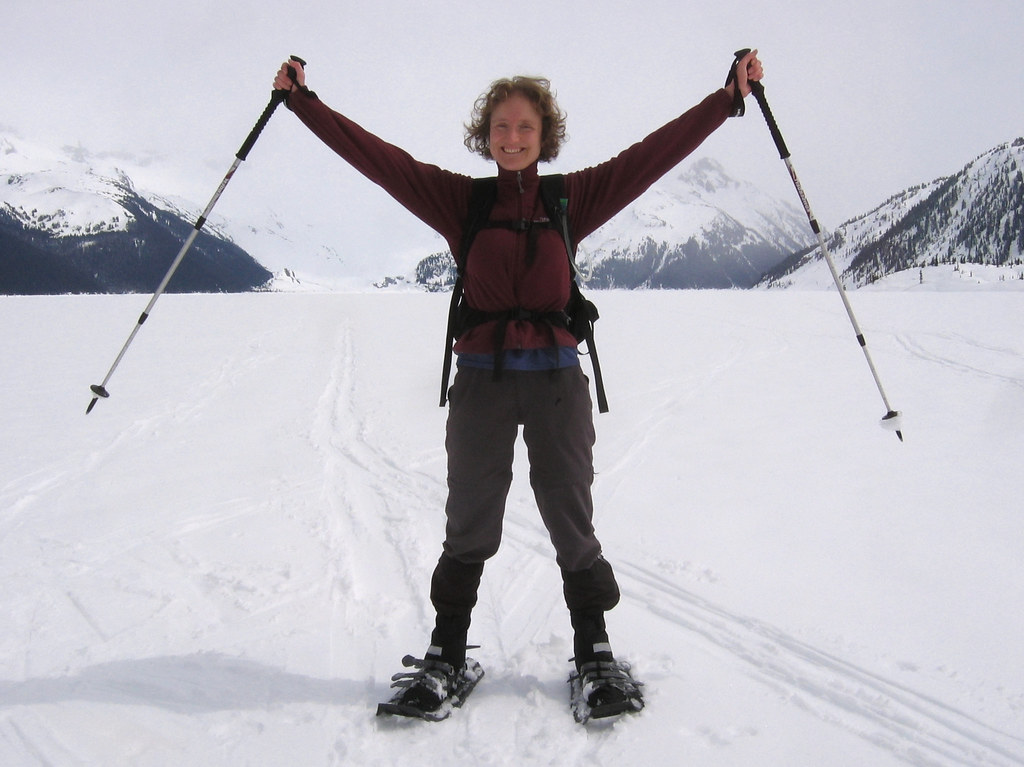 But we resisted and plodded about near the shore, taking photos and doing our best to recognize things we knew from the summer. We were out by the Battleship Islands, now just little rises in the snow. The surprising thing was that the snow wasn’t flat, but after some thought we realized that the snow was piled up by the wind howling across the open lake. We found a suitable island to perch on (the tip of a tree was just poking up through the snow) and sat down to have lunch.

After some food, we explored a bit more, took yet more photos of Mt Price on one direction, the lake in another, and finally Black Tusk peeking over the trees to the north. But time was passing, and we needed to make a move back down to the car. Plus we were getting a bit chilly and needed to warm up again. Reluctantly, we turned round and began our descent. This time we followed the skiers route down, over a snow-bound Rubble Creek. In places, the creek showed through, showing just how deep the snow was! Gradually the trail was pushed over to one side of the creek and we ended up in the trees. 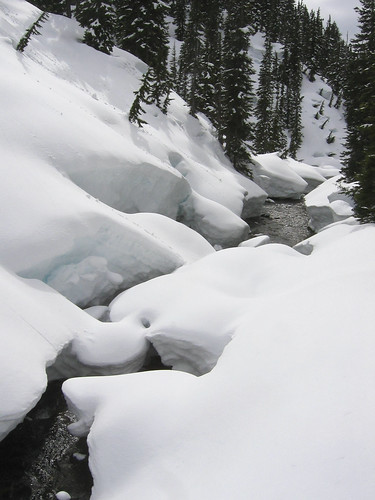 We came to Lesser Garibaldi Lake, which was starting to melt at one edge. We moved down out of the trees onto the still-frozen part of the lake, and here we spotted recent snowshoe tracks, probably from the group we passed earlier. It looked like they didn’t make it to the lake after all. We walked round the edge of the lake and back into the trees for a short while before we came to Barrier Lake. This lake was still completely frozen and so we followed the ski tracks across it. At the far end of the lake, the skiers went back into the trees, rather than follow the gulley which led to the Barrier. But we carried on through the gulley and came out to a point with spectacular views of the Barrier. I never tire of looking at it, hearing the occasional rock fall.

Eventually we headed back into the trees and followed the trail back down to the car. Before long it was time to take off our snowshoes and hike the last stretch, reaching the car at about 6.30 pm. Time to head home. Wow – what a hike! We didn’t see anyone on the way down.

A brilliant day out, just fabulous. Unbelievable snow up in the meadows, fabulous views of Black Tusk and Garibaldi Lake, and we had it all to ourselves… Best anniversary present ever :-)