Somehow I’d got it into my head that this was a flat and boring hike… We settled on this one as a fallback, a hike to get “out there” more than anything else because the summits are still snow-encrusted. I knew it was about 12 km, comparable with Norvan Falls which is flat and, well, can be boring.

Sunday dawned clear and sunny. And hot, probably the hottest day of the year so far. After a bit of dawdling we set off for Golden Ears Provincial Park, near Maple Ridge. This isn’t an interesting place to drive to: a short stretch of highway then lots and lots of traffic lights on Lougheed Highway, all of which seem to be deliberately timed to slow the traffic. Eventually, after what felt like an age, we took the signposted turn up to the park. Plenty of cars (and boats) heading in to the park (and quite a few coming out again). As we approached the campground, we were stopped by police who asked us where we were going, and if we had any alcohol. We were waved through (no, we didn’t have any – honest :-) and parked up in the West Canyon parking lot. First chance to make use of our annual parking pass (great value at $25!).

We pulled on our boots and hats and set off around 11.25 am. Being an old logging road, the trail was wide enough for us to walk side by side. It was lined with salmonberry and thimbleberry bushes, and in a few weeks will be a very tasty place to hike! A few salmonberries were turning pink, but most were still green. Although the surrounding forest had been logged, it was recovering well and was developing an under-storey of huckleberry and ferns. And the birds were singing. 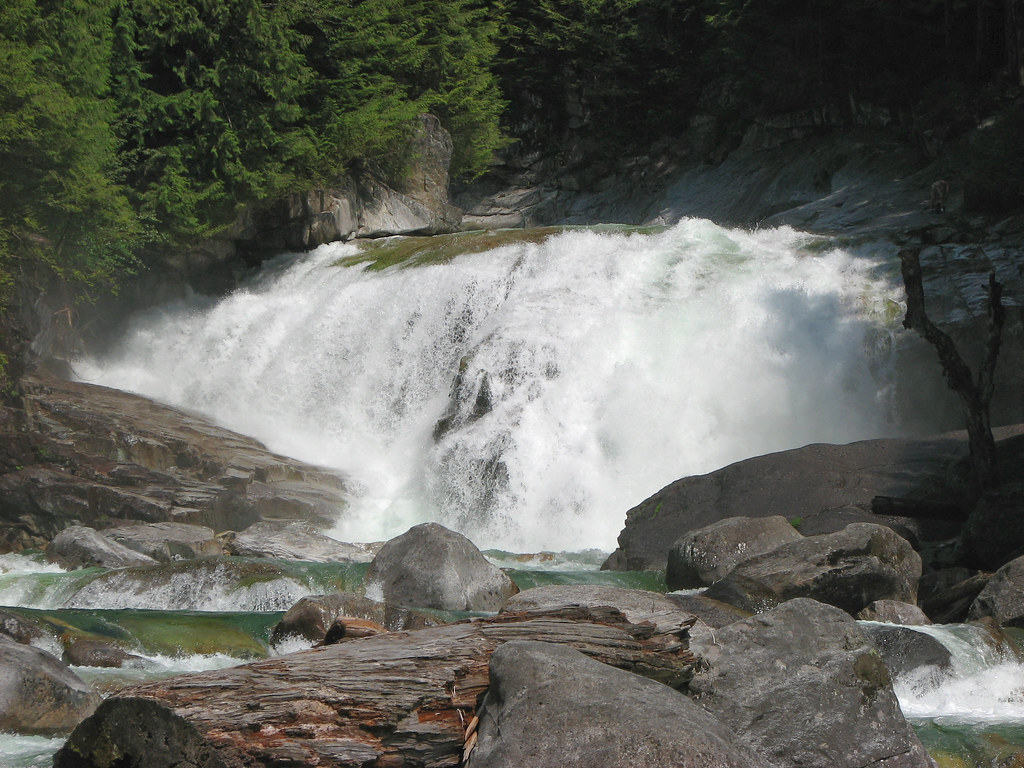 Even in the shade it was hot. There was little or no breeze and the effort of pushing gently uphill was warming us up. OK, I’ll admit it: I was dripping already. We crossed a couple of dry creeks and then the double bridge over Evans Creek. At this point the trail narrowed to something more like a path through head-high salmonberry and ferns, lined with spring beauty at ankle level. We kept up a steady pace and after about 40 minutes came to a sign pointing (downhill!) to a view of the Lower Falls on Gold Creek. We’d seen these from the other side last year and couldn’t resist a look. It was well worth it: the falls were in good flow and of course the air was deliciously cool down by the river. We stopped here for a few minutes to have a snack. It felt so good to be there I was almost content with making that my day out! But I knew my mind and body wanted more, so we dragged ourselves back up to the trail.

The trail began to climb more steeply and wound its way through newer second-growth forest: lots of widely spaced trees with very little ground cover. In places the trail was hard to follow since the soft bare earth offered little clue where to tread. Here and there we picked our way over and around blowdown and big old stumps. Eventually the trail levelled out and followed the contour of the slope, often underneath big boulders and cliff headwalls. Around one corner we came to a huge old stump and a small clearing in the trees with a stunning view of Gold Creek and its valley, as well as a few distant peaks. A gorgeous sight, especially on such a sunny day. 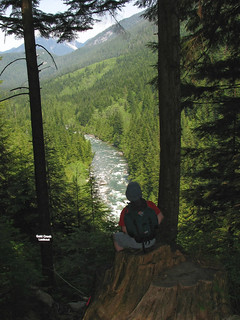 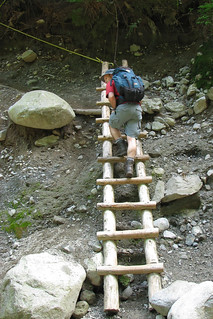 Moving on our next obstacle was a large washed-out creek crossing. A wooden ladder has been put in place to limit further erosion by numerous boots, but it probably won’t be too long before the current trail disappears itself. Climbing up on the other side the trail gained a little more height and crossed an avalanche track: big-leaf maple and salmonberry. And the sound of hummingbirds, although we didn’t see one. Turning another corner and gaining a little more elevation, the trees began to change. We had left the second growth behind and here and there were subalpine firs with their characteristic scent, enhanced by the warm sunshine. A real treat for the senses.

The trail wound through the trees, turning to boardwalk in places to cross some of the numerous small creeks. A tantalizing glimpse of Golden Ears appeared but no matter how hard we tried, it was impossible to get a good photographic angle on it. Bunchberry appeared, along with other flowers such as bleeding heart. Here we go chasing spring up the mountains again! Over more boardwalk where the creek was running underneath our feet and then the sound of a noisier creek, cascading down a slope. We could see the creek far below, but no sign of the waterfall. Before long we came along side this creek and then crossed it into the Alder Flats campground.

Well, the campground was a dump: rubbish everywhere, the outhouse looked like a bomb had hit it, fire pits full of tin cans and beer cans, and toilet paper strewn about (or left in small bundles, obviously where it was used). Utterly disgusting. It really gets my back up to see the backcountry mistreated in this way. Problem campers invite problem animals for all of us. It’s such a shame: it’s a stunningly beautiful spot underneath the jagged peaks of Golden Ears. 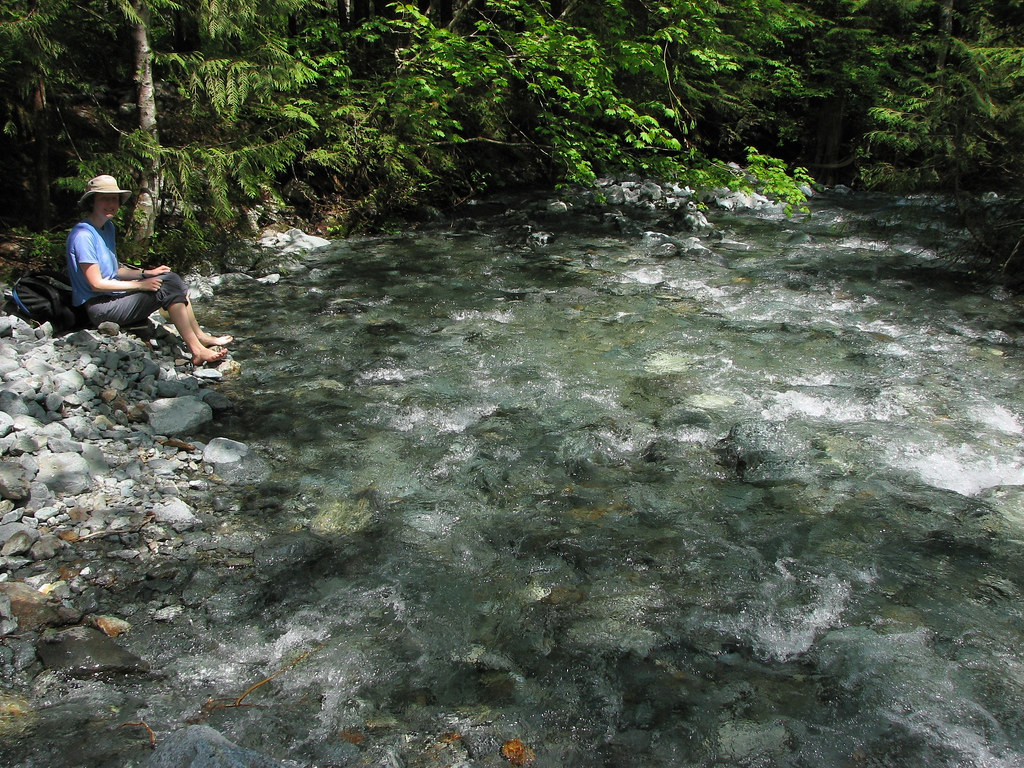 We carried on through the campground looking for a better view and a cleaner spot for lunch. Before long we realized we were not going to get any more views so we headed back down to the creek. The creek was a gorgeous, noisy bubbling mountain stream, icy cold (as Maria found when she dipped her feet in it!) and totally clear. Here we sat for lunch, perched on the rocks washed down by the stream in flood. It was so incredibly serene. From here we had the best view so far of Golden Ears. We were half way there in distance, but had barely scratched the surface in terms of elevation gain! That’s going to be a tough hike when we get round to doing it.

Eventually we dragged ourselves away and headed back to the car, making it back in an hour and 40 minutes. We covered about 13 km, with a total elevation gain around 300 m: much more of a workout than I expected! Highlights: Lower Gold Creek Falls, spring growth (flowers, ferns, trees), big old tree stumps, Gold Creek overlook, interesting trail on upper section towards Alder Flats, view of Golden Ears, being in the mountains on a warm day. Meh-points: extensively-logged, state of Alder Flats campground.

So all in all, I can see that some people would feel this is a dull hike at times: there aren’t any panoramic viewpoints, the trail is mostly under tree cover. But as with so many other hikes, this one should be viewed as a hike on which the journey is far more interesting than the destination, so go in spring to catch the flowers and be in good company. One to be savoured!