We reluctantly stirred around 6am and set about the messy business of eating breakfast and repacking our backpacks. By 8.30 we were packed and ready to go. Now, our car isn’t very large and it doesn’t hold four people and four big backpacks very easily. But it was fun to try :-) Well, maybe not for Andrew and Merewyn who had to squeeze into the back seat with their backpacks. I could barely see out of the rear window. We drove to the trailhead (fortunately not too far and not on the main highway), though I didn’t see a nasty little bump in the road and well, let’s say that the passengers in the back came off worse that we did in the front. Ouch!

Parking up, we hauled our packs onto our shoulders and set out across the parking lot for the trailhead. Crossing the Robson River we were greeted by an utterly soul-destroying sign which greatly exaggerated the elevation gain to the point it looked like we were scaling Everest! We convinced ourselves it really wasn’t going to be that bad and set off up the trail. The first stretch is basically an old road. We could walk almost four abreast and chatted as we gently warmed up our cold muscles. We hadn’t done much backpacking so far this year so it was going to be a bit of a grunt to begin with. Well there’s not a lot to see on this section. Trees, mostly. There was a nice view of the river at one point, overlooking the rushing Knowlton Falls. The water was running fast and looked very cold.

After a little over an hour (perhaps an hour and a half?) we crossed the river again as we reached the shores of Kinney Lake. Now we were able to get our first really good look at the surrounding mountains, but our attention was drawn by the perfect mirror reflection of Whitehorn Mountain in the lake. If we saw nothing else for the rest of the trip, that view would have been worth it. The lake was completely still, not a single ripple. The photo we took is now hanging in a frame in our apartment. It was a good time to drop our packs, take in the view and grab a snack. 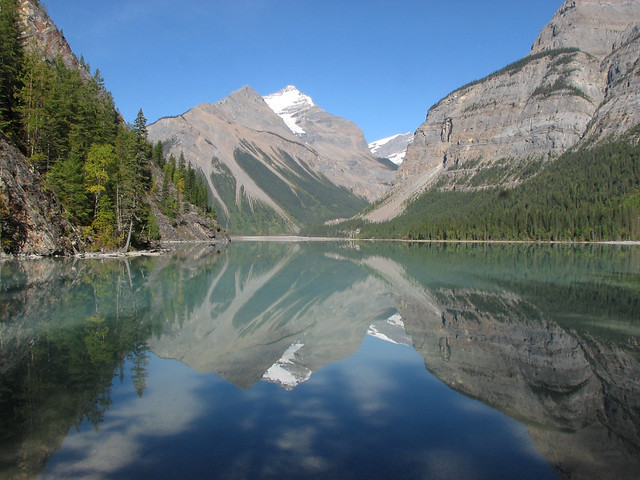 The incline to the lake had been quite gradual, gaining only about 140 m over 5 km, so the next little bit definitely got the heart pumping. We climbed about 10 m in a series of three or four steep little switchbacks before levelling off along the side of the lake. As we approached the Kinney Lake campground the terrain opened up as we entered the birch-wooded flood plain. Through the campground and we climbed again, gaining 20 or 30 m so we were well above the lake with steep scree and debris slopes above us to our right. The trail ambled up and down (always a killer with a heavy pack) and then dropped us suddenly at a small bridge over the river again. We were warned to cross only one at a time – was it not sturdy enough for more? Perhaps they were worried about getting washed off the bridge? We couldn’t work it out.

Then out into the open on the flood plain, we crossed the valley floor with a spectacular series of avalanche paths cutting through the trees on the slopes up ahead of us. Reaching the trees, we climbed again ascending gently through maples and birch trees. Before long we crossed the river again over a suspension bridge at Whitehorn campground. We found ourselves a lunch spot by the river, taking the chance to cool our feet, and given the time we were glad that we were continuing on to the next campground. Well, we were glad at that point….

Suitably refreshed we pushed on, the level trail hugging the valley side again. The valley had opened up as we entered the Valley of a Thousand Falls. From where we stood we could count numerous meltwater falls cascading over the great cliffs of the valley wall. At one point we heard an almighty cracking and rumbling sound from one of the many glaciers. We were hoping to see some debris fall but nothing. The next sight was White Falls. From the trail it looked, well, nice I suppose. So we trogged off over the rocks for a better view and were very glad we did as the full cascade was simply not visible from the trail. Two large and blindingly white sets of falls along the Robson River cutting through a steep-sided gorge. And there was I thinking the waterfalls looked a little small! 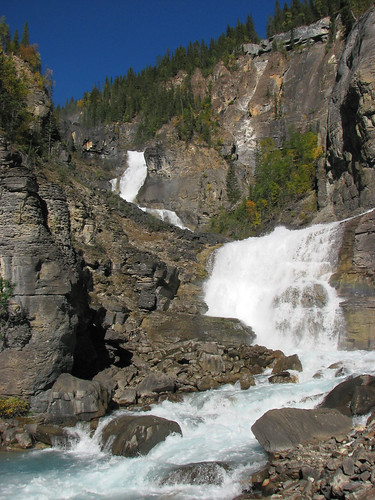 We crossed the river again on a sturdy steel bridge and then began The Climb. Oh boy, what a climb! Over the next few km we had about 500 m of elevation to gain. The first bit was by far the worst, gaining 150 m in endless switchbacks, before levelling off slightly. I made the mistake of powering up this part, and felt good as we stopped at the Falls of the Pool, an impressive single-drop waterfall into a perfect circular pool. Unfortunately the sun cast a strong shadow over it making photography difficult. A quick breather and onwards and upwards again. Over the next half an hour or so my pace slowed to the point of not much more than a plod as every ounce of energy drained out of my legs. I fell behind and was so relieved when we reached the sign for Emperor Falls (we had seen the falls as we approached – wow, they really are spectacular!). A 100-m side trail led to the base of the falls where a cool mist washed over us. We dropped our packs and went as close as we dared. A good spot for a group photo :-) Again we were unlucky with the light as the sun went off the falls in the 10 minutes we were there. But it was amazing to stand there underneath these falls with huge quantities of water crashing down in a spectacular `rooster tail’-shaped curtain.

We pulled on our packs again, happy that the campground was just around the corner. Except that it wasn’t. There was still more than a kilometre to go and I was spent. That was the longest km of my life and I staggered into the campground, where we chose our camp spots and set about pitching our tents. I was exhausted. We’d covered 16 km and gained 750 m in elevation, and I felt every inch of it. :-) Perhaps at that moment I could not say I was enjoying myself, but the reality is that you could not have paid me enough to be anywhere else. One of the most spectacular days of my life. Our camp site looked up at the massive cliffs of Mount Robson itself, and we cooked dinner while watching the sun cast golden light on the snow and glaciers before fading to pink and then darkness. 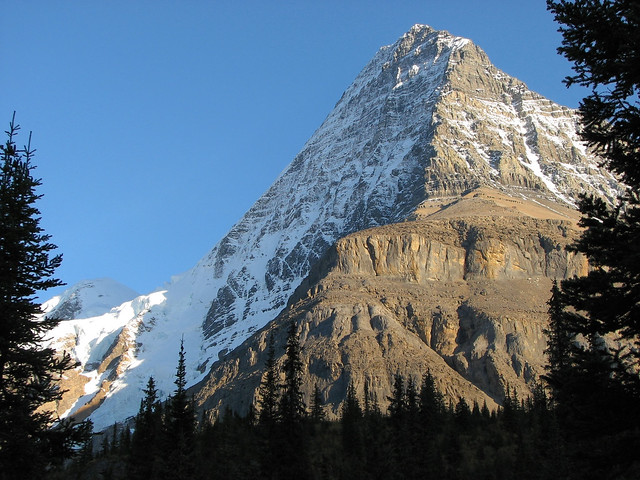 Tired but happy we settled down for a night’s well-deserved sleep.