Brrr! A chilly night, and a light frost covered everything as we crawled out of our tents. We draped the fly sheet over a small tree in the hope that a glimmer or two of sunshine would begin to dry it off. It was another beautiful sunny morning as we munched breakfast and a speedy pack-up was the best way to keep warm! We set off in the cool morning air, along an easy level path all memory of yesterday’s energy-sapping climb banish as we walked along in the warm sunshine. Autumn was definitely fast approaching with the leaves on the berry bushes turning various shades of brown, yellow and red, with the grass and other plants taking on a burnished appearance. 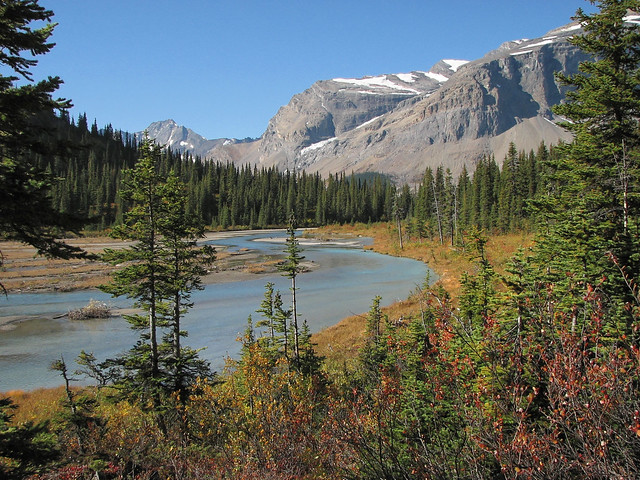 We followed the river for a while before traversing a steep talus slope (remarkably the trail was still easy going). Before us lay Mount Robson; Whitehorn mountain came into view behind us, its tip a dazzling white against a pure blue sky. The trail descended onto the floodplain and we rounded a corner to get our first views of Mount Robson’s glaciers. We walked past the dirty Mist Glacier and its moraines and on towards Berg Lake and the fabulous Berg Glacier cascading into the lake. We reached the lake, a fantastic greeny-blue colour and paused for more photos. The walk alongside the lake was unreal and it was hard to take our eyes off the view (or stop taking photos!). The lake, the glaciers, the mountains… Such incredible beauty, too much to take in at first sight.

We soon reached the campground and claimed our spots. Time to pitch the tents and lay out the wet gear to dry. I washed a pair of socks, hoping to freshen them up for the next day and hung them near the tent. We checked out the Hargreaves Shelter (cosy) and went down to the edge of the lake to eat lunch (a standard precaution in bear country — eat well away from where you sleep) and admire the small icebergs floating in the lake. After lunch we settled back for some relaxation, a quick paddle to cool our feet, maybe even a swim. Of course Andrew and Merewyn went for the swim; I couldn’t stand in the water for more than half a minute as my feet went painfully numb and I was in danger of falling over because I could not feel my feet! Well, those little icebergs looked just too inviting and Andrew swam out to retrieve one. An admirable job, he even brought back one that looked like a swan. 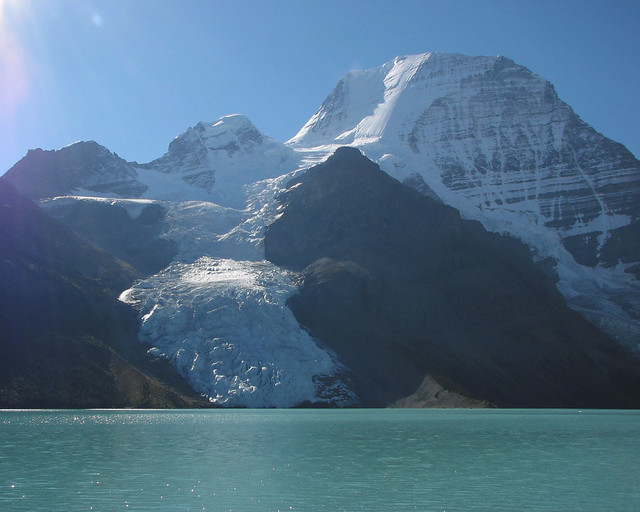 Having dried off and warmed up, it was time to go exploring. At the shelter we had read about a mysterious cave up on the hillside above the shelter. As luck would have it, the trail went past Toboggan Falls which we really wanted to see. We set off and the trail turned steeply straight up the slope past the falls. How to describe the falls? Just like the name says, a toboggan run. The rock layers were tipped downslope, and the creek ran in a small number of shallow channels, only occasionally cutting a deeper channel as the water encountered softer rock. A beautiful waterfall, more like a run or cascade than falls. Further upslope we came across more waterfall-looking waterfalls, and gradually left the creek behind as we continued to gain height above the lake.

At some point someone had the bright idea to stop and turn around to look at the view. And what a view! If we thought the mountains and glaciers looked good from lake level, it was nothing compared with the views we now had. Just amazing. We gawked, we ogled and of course we took photos before continuing upwards on the trail to the cave. We reached the tree line and the train turned east more or less following the contour line towards a cliff band. Within a short time the trail ran out but by now we could see the entrance to the cave, a sloped narrow letterbox in the rocks ahead. We dug out our headlamps and carefully ventured inside. The inside was cool and the rocky floor smooth and damp. Checking that we weren’t going to slip, we went in a little further. The main entrance chamber was maybe 15 to 20 m long and we soon reached the end. A couple of cracks allowed us to see a bit further but there wasn’t anywhere for us to go. We turned off our headlamps to check out how dark it was. After waiting for our eyes to adjust to the dark, it was possible to see a little bit thanks to a small amount of light from the entrance. 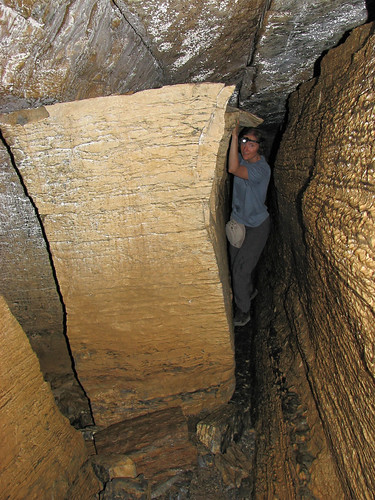 We made our way back towards the entrance and noticed a small crack to our right. A quick test and some probing with the headlamp and we found we could (very carefully!) go a little further. We edged through this crack and shuffled sideways along a narrow passageway to another cave. Woohoo! Here it was completely dark. We took some highly amusing group shots (well, they amused us anyway) and made our way back out, hoping that no one had expanded during their time in the cave. Soon we were out and being blinded by the bright sunshine. 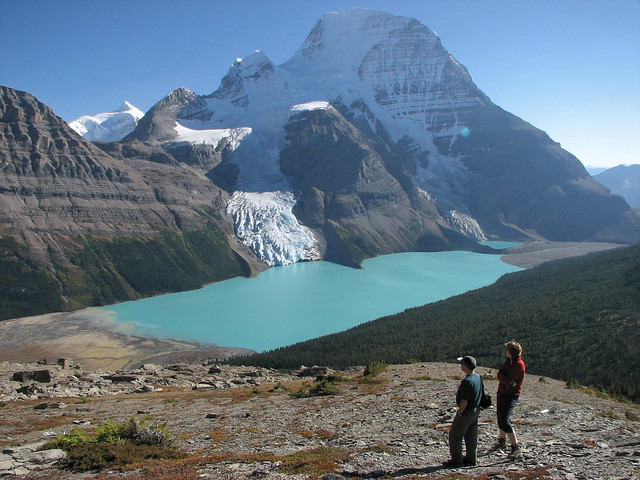 We spent the next hour lying in the sun, soaking up the magnificent views, pinching ourselves that it was real. Quite by chance I trained the binoculars on the summit of Mount Robson and was amazed to see the crescent moon just rising! Eventually and most reluctantly we began our descent, returning to the lakeshore for more views of the Berg glacier. By now the wind had got up and it was far too chilly to contemplate another dip in the lake. That didn’t stop some other guys trying – and failing. We checked back at the tent and found the fly-sheet was dry enough to put back on, and that my socks were still soaking wet.

The cooling evening air forced us inside the shelter to eat and chat with other hikers. Late in the evening we got chatting to a solo hiker who was interested in going up to Snowbird Pass but was unsure of the route alone, so we invited him along with us. Seemed like a decent guy. The fact that he was an avid Metal fan was a bonus :-) We watched the last light drain off the slopes of Mount Robson and headed off to bed at the end of a long and glorious day.