It started with a low rumble and ended with a resounding crack that echoed around the valley. Thunder? Maria and I sat up in the tent and looked at each other (as you do, in the dark). No lightning, no rain. Another brief rumble and it dawned on us: it was the glacier. We listened for a while more but heard only a few faint cracks and rumbles, and we drifted off to sleep. 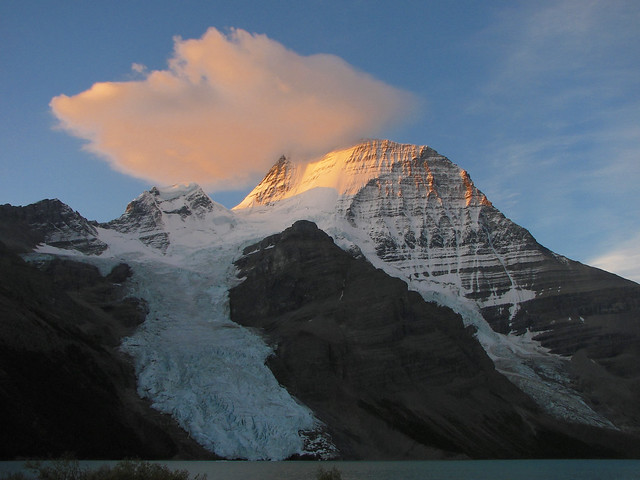 I hauled myself out of bed around 6.30 am with the camera to catch the first light of sunrise on Mount Robson, though I had missed it by a few minutes. Andrew was already there and had better photos to show for it. On the far side of the lake we could see the results of last night’s thunderous calving: new icebergs. Since I was now awake, I filtered some water and started our breakfast routine. Another fine sunny day had begun on Berg Lake. However, heavy cloud soon rolled in and by the time we were ready to set off on our hike, the summit was shrouded.

We hung around for a few minutes waiting for our heavy metal friend, but couldn’t find him so we set off across the outwash plain of the glacier (he later caught up with us anyway). Our first stop was a sign marking the toe of the Robson glacier in 1911, now more than a km away. Looking around, it was easy to see where the glacier had been, with jumbled moraines lining the Robson River. I love visiting these places, seeing glaciers and their effect on the landscape has long been one of my ambitions and glaciation was always my favourite subject in geography lessons.

The trail began weaving up and down over glacial deposits and on nearing the meltwater pond at the toe of the glacier, started uphill along the side of the valley. We contemplated going down to touch the glacier, but decided to leave it to the return journey. From a distance it was simply impossible to see the trail we were on and we wondered how we were going to get up to Snowbird Pass from the valley floor. But the trail merely wended its way up the valley side until we reached the lateral moraine marking the old top of the glacier. By now we were almost 100 m above the valley floor: that’s a lot of ice! The next couple of km was easy going along a narrow but well-defined trail, all the while with fabulous views of Rearguard Mountain across the valley and the massive Robson glacier. We didn’t realize just how big it was until we reached the turn up towards Snowbird Pass and we could see how it covered the eastern slopes of Mount Robson, disappearing into the clouds which covered the summit. 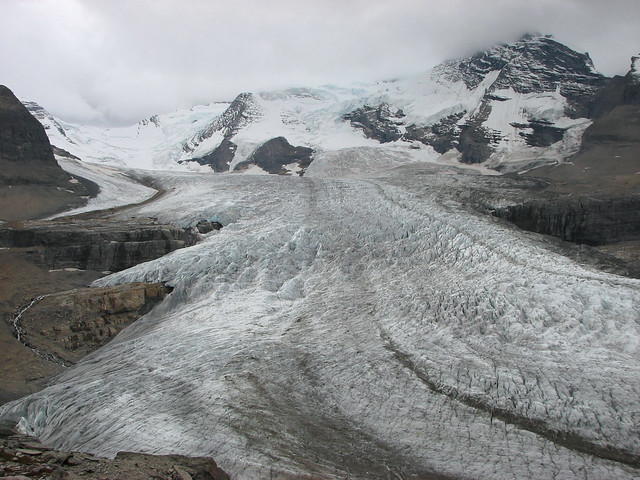 A left turn took us up into a vast expanse of meadow (which is closed in May and June to allow caribou to calve). A week or two earlier would have seen this area at its most colourful, but by now autumnal shades of yellow, gold and brown had settled on the landscape. This stretch of the hike was simply stunning. The way was easy, and we could have spent many hours up there. But we had an icefield to see, and from the look of the weather, a storm to outrun.

We sent a number of marmots scurrying for their burrows as we made our way through the meadows, but saw no other animals. It was extremely quiet and peaceful. As we gained more elevation we were treated to our first drops of rain, small at first then getting a little larger. We paused to put on rain gear and continued on, and soon the rain turned to snow. We pushed on to the pass, where the wind turned the snow into horizontally-driven pellets, and we scrambled up the side of the pass to find a little shelter on the lee side.

Well, we had made it: time for some lunch and to take in the, err, view? What view? We could see that somewhere below us was something large and white, but the low cloud and snow meant that we could not really get a feel for whether we were looking at a vast icefield. We took a few chilly group shots (we were pretty damn cold by now) and we began our journey back to the campground. I got another September snow shot and turned to hear Andrew exclaiming over the sight of a pair of mountain goats running down the hill. None of the rest of us saw them – they just disappeared.

Descending back into the meadows, the snow eased off and we regrouped in a small hollow, where we turned round to see a pair of ptarmigan (but only when they moved – until that point they were impossible to spot). Remarkably, we could get quite close to them, and we were later told that they’re so stupid they could be hunted with a car door (or words to that effect). They certainly were not particularly bothered by our presence. Then we encountered more marmots, which had re-emerged from their burrows in the wake of the storm. 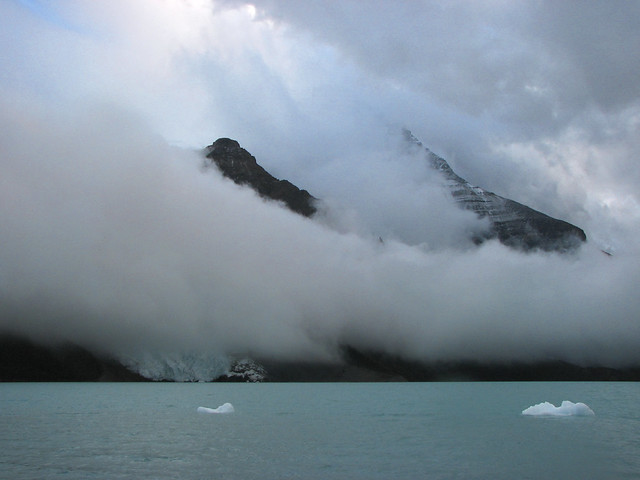 We wandered back through the meadows, taking in the scenery around us and soon rejoined the moraine trail. All too soon we were back on the valley floor and had completely forgotten about going down to touch the glacier. Berg Lake was covered in low cloud making for a very moody scene, especially with the little icebergs dotting the lake. Time for a hot drink, some lazing around and then a very warm and sociable evening in the shelter. Later that evening I had one of my most revolting outhouse experiences. One of the disadvantages of standing up to use a pit toilet at night while wearing a headlamp is that you can’t help but shine the beam down into the pit…. where I spotted movement, and saw a squirrel/rat/something else trotting around collecting dry toilet paper for nesting material. I had to look up immediately as the thought made me gag. Just gross.

And on that note, time for bed. In a nice clean tent.