Mount Seymour take two… With a fine forecast and no recent snow, there would be no problems getting up the mountain this week! Eight of us met at the usual place and set off for a fun day in the snow. The parking lot was mostly clear (just a few patches of ice here and there) and the snow was firm, so we all carried our snowshoes for the first 15-20 minutes, only stopping to put them on when we reached the first major incline. As we were doing this, someone called my name and I turned to see Tracy from last week’s hike. She was heading out on an avalanche course. We really should get out on one of those soon.

There’s nothing like a sunny day out in the snow and before long the cameras came out for good. Sure it slowed us down, but we weren’t in a hurry. We made it to Brockton Point in just under an hour (usually takes only 45 minutes), and with the new views opening up to the east we took more photos. Just beautiful. From this point, the trail was not marked with poles so it was up to us to decide a route. It helped that we were familiar with the route, plus of course many people had gone before us in the days since the last snow fall, so it was easy going. The snow was hard packed and snowshoes were not really needed. Crampons would have been fine. Something to go onto the Christmas list perhaps.

One feature of these conditions is the hoar frost that grows on everything makes for really pretty pictures. The surface of the snow was covered in these crystals, I felt obliged to stay on the trail so as not to destroy them. But I couldn’t help taking some photos :-) 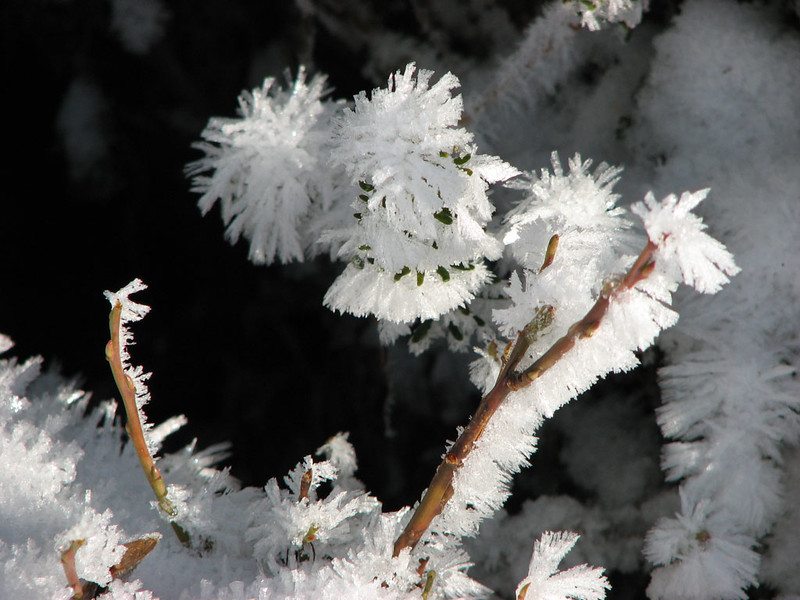 Onwards and upwards… Now for the real climb. The steep flanks of the First Peak were largely snow free so there was no danger of avalanche. We plodded up to the Elsay Lake trail junction and then up and up into a saddle, which gradually turns into a large open bowl beneath the First Peak. Crossing this we had one last steep climb before reaching the base of the peak. A little tricky but our MSR snowshoes gripped nicely. We took a short break here to allow everyone to catch up, before continuing straight on to Second Peak.

The approach goes up a narrow gulley, which steepens towards the top: a real avalanche hazard in poor conditions but again today we were OK. At the top, we turned right up to the Second Peak. We found a good spot with views of nothing but mountains – Eagle Ridge and beyond to the east – and sat down with our lunch. Almost immediately we were joined by a raven or two, at first cautiously perched in a nearby tree but then brave enough to walk within a few feet of anyone willing to offer some crumbs. Without warning a couple of Whiskey Jacks appeared and entertained us by perching on heads, hands, backpacks – anything to get closer to the food, even stealing some straight from John’s hand at one point (much like Maria and her chocolate theft on Black Mountain last winter)! Yikes! Shows how often they get fed (which isn’t good) but I suppose it does make for a good photo-op. 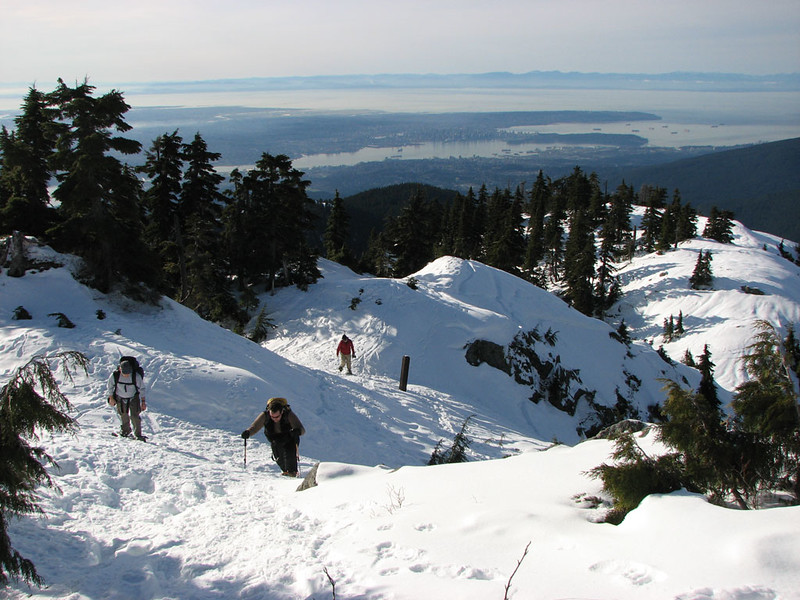 Despite the sunshine, sitting on the snow is a cold affair and we soon felt the need to get moving again. We spent a few more minutes wandering around the small plateau that forms Second Peak, taking in the views, watching the hordes clamber over First Peak… Eventually it was time to return to base. Heading back down was a lot easier, but the snow was not quite good enough to slide on. Reaching the base of First Peak again we opted for our own attempt on that little summit, despite the poor snow coverage. And somehow we found room to stand up there for all of a minute before heading back down.

The descent was much quicker, as usual, and we even caught up with another group from Wanderung who’d set out an hour later than us. We chatted for a bit, admired the view and gradually tore ourselves away from the mountain and back to the cars for coffee and cake at the Lazy Bay cafe! Mmmm!! Orange and blue sunset skies guided us home. A perfect day out. 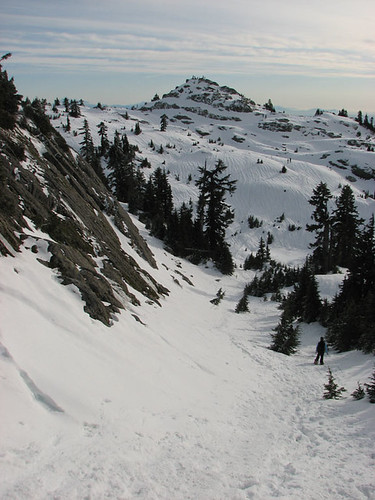