The weather was better than forecast and still improving so we couldn’t resist getting in a moonlight snowshoe. We made it a last-minute callout to the Wanderung group and had one other person join us. We met at 5.30 pm and headed off to Mount Seymour in gorgeous late afternoon light. By just before 7 pm we were on the trail. The ascent was at a nice comfortable pace, just enough to get a workout (and take photos of course) not so fast as to break a sweat. Within 40 minutes we arrived at Brockton Point to get our first clear views and spent some time marvelling. We’ve been up Seymour (and the other North Shore peaks) many times, but it’s always fabulous to get the views of the sea of mountains north of Vancouver, as well as the city itself. 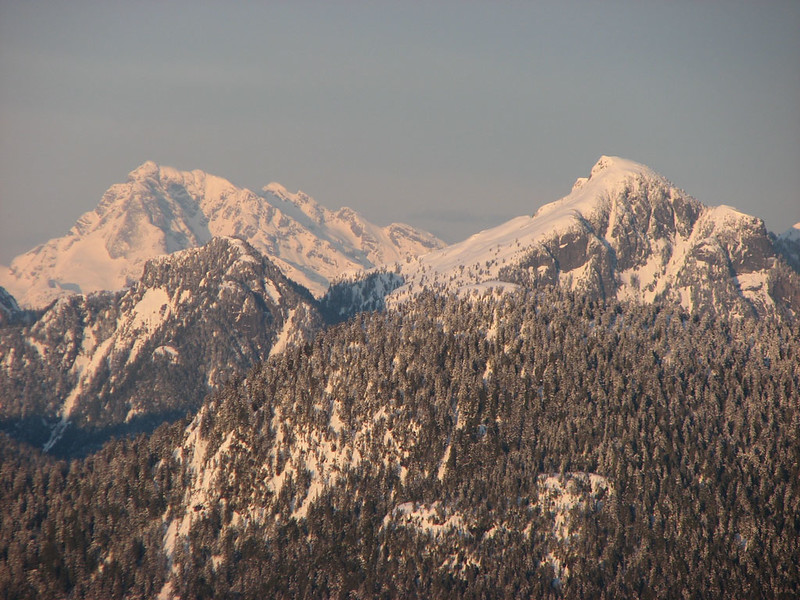 We were in the golden hour for photography, and our companion Rob was as keen as us to take advantage of it. The light on the snow was a soft, warm yellow and was turning more golden by the minute. On beyond Brockton Point, we dipped into shadow, but retained our eastward views of Eagle Ridge, Coquitlam and Golden Ears and beyond. The light grew redder and became the dusky pink of alpenglow, lighting up the peaks to the east. Turning uphill, we began the steepest part of our hike and easily made our way up following the well-trodden route. The orange winter poles had been removed, but with the good visibility, and familiarity with the route, we had no problems finding our way.

Soon we entered the saddle just below the first summit, descending slightly into the bowl below the peak before another short but steep climb to the base of the summit knoll. As we crested here we were hit by an icy blast of wind from behind while simultaneously greeted by spectacular deep orange sunset colours to the west. The sun had now set so all source of warm had gone, making the wind all the chillier. But now we could see Mount Garibaldi in the north, and the ridges of Grouse and the Howe Sound peaks silhouetted against the sky. We headed up the steep little rise to the summit of First Peak or Pump Peak. We braved it long enough to admire the view and grab a quick group shot (complete with blowing snow).

We beat a hasty retreat back the way we came, quickly descending into the bowl out of the wind. From there we sauntered back down the mountain, and even though we knew the route and had travelled it only a few minutes previously, there were still times we had to stop and examine our surroundings carefully to make sure we took the correct route. A good reminder that no matter how well you think you know where you are, it is easy to make a mistake, especially in snow. So with care we picked our way down, and as we skirted the cliffs leading up to First Peak, we encountered the star of the show – the rising full moon. (I suppose star is the wrong word since it’s not a star… :-) It was bright enough that we did not need to use headlamps to see our way, even before the moon rose but now we had no problems. It was even bright enough to judge depth (always difficult in low light). 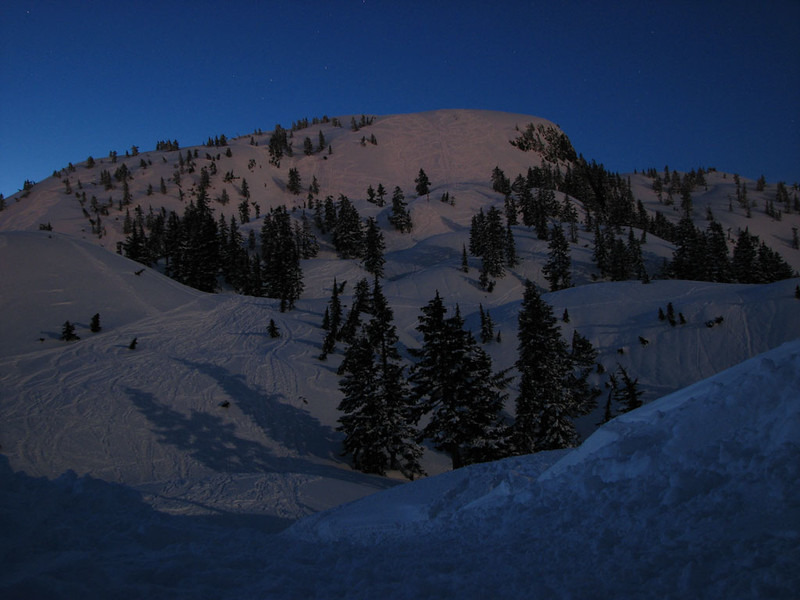 As the moon rose higher, the light changed again, with a new source of soft pale yellow light. The trees cast deep blue shadows on moonlit snow, a beautiful scene so hard to capture with the camera. We tried a few shots of course (impossible to resist really). Back at Brockton Point, we stopped long enough to take a few more photos, including the city lights, before heading back down to the car and home.

A fabulous evening snowshoe – if you weren’t there, you really missed out.