The weather forecast looked, well, interesting. But when you’re backpacking you have to deal with whatever gets thrown at you, and there was no way we were going to back out now. We picked up Merewyn at 8.15 am and got under way. We stopped at the Galileo Coffee shop in Britannia Beach for dinner (i.e. we picked up a couple of their wraps which would be filling enough to act as dinner!), and bumped into a couple of other hiking friends who were headed up to Lake Lovelywater in the Tantalus Range. Popular hikers’ stop that place… Back on the road we contacted Christian to touch base, and then merrily chatted our way up the road up to Whistler and Pemberton. We had an early lunch at the Pony Espresso before heading up the Duffy Lake Road.

Pemberton lies in a nice flat valley bottom, and from there we could see some ominous clouds drifting around the various mountains, and especially in the direction we were headed. Up the switchbacks we went, passing an RV or two in the process before running into a few rain showers. Suddenly the air felt cool, and we could see some sleet and snow mixed in with the heavier showers. We joked about the weather but it really didn’t look very encouraging, especially as we were at an elevation of 1000 m and were heading up to near 1800 m.

Reaching the end of Duffy Lake, we took the sharp right up the Blowdown Forest Service Road (FSR) and made our way steadily up the 9 km of dirt road. Well, normally it’s dirt but today it was mostly mud and we were very glad that the road was not steep (any short hills remained gravelly). We splashed our way through some spectacular mud holes (poor car, it still needs a wash…), and after about 20 minutes we reached the final ascent up to the Blowdown Pass trailhead. Up the steep-ish hill we went, turned the corner and suddenly we could go no further thanks to a deep, muddy water bar right across the middle of the road. OK, well I guess we start from here then! I turned the car round and we unloaded Merewyn and Maria’s packs. We stepped out of the car and we all reacted to the cold air (I was still in T-shirt, shorts and sandals). Unloading was a speedy affair and by 1.35 pm I was ready to set off to meet Christian.

Leaving Maria and Merewyn to their own devices in the cold rain I made my way back down the road, pausing briefly to let a few wet-looking motorcyclists to pass. On reaching highway 99 again, I turned right and headed east towards Lillooet. This was new ground, having never driven this far before. And it was a spectacular drive! The roads crossed Cayoosh Creek several times (always on single-lane bridges) and descended steeply through a narrow, twisty canyon, eventually dropping me at the Seton Lake reservoir on the outskirts of Lillooet. By now the rain had stopped, and the sun had even come out, turning the lake a fabulous blue. Passing by Lillooet, I turned onto Highway 12 and followed the Fraser River for the next 60-odd km down to Lytton.

Another gorgeous scenic drive, with high jagged mountains on the west side of the Fraser, and dry rocky or grassy slopes to my left. In a couple of places, the road passed through areas of significant rockfall, and even narrowed to a single lane at one point. I made good time and arrived at the Lytton ferry at 3.20 pm, about 5 minutes later than we had agreed. 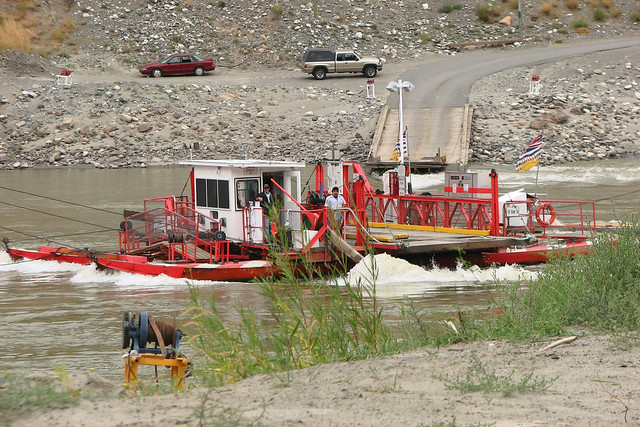 Except there was no sign of Christian. So I waited, now in the rain again, while watching the ferry go back and forth across the river. Ten minutes passed, half an hour… I drove off to Lytton in search of coffee and returned within 15 minutes. Still no Christian. Had I missed him? He had his bike and had said he would start cycling towards Lillooet if I wasn’t at the ferry. Checking my watch and I decided to go 10-15 km up the road in search. I got back 25 minutes later having seen no cyclists (though I had been stopped by a small group of Bighorn sheep) and still no sign of Christian at the ferry. It was now after 5 pm, and I was beginning to wonder what to do had he not appeared by 6 pm. We hadn’t discussed that possibility. At 5.20 pm I saw a Toyota Celica coming down the road behind me and as it drew alongside I wound down the window to greet Christian. Phew! At last! There had been a bad accident on Highway 1 a few km north of Hope which had held up traffic for a couple of hours.

We both took the ferry across and headed up to the trailhead where we left Christian’s car (in a fairly crowded parking lot) and, loading his bike onto the back of our car, we took the ferry back and headed off to the Blowdown Pass trailhead. The drive back was uneventful (apart from a black bear sighting at the roadside), and even trying to make up time it still took until nearly 8 pm to reach the trailhead. We dropped off our gear at the same spot I’d left Maria and Merewyn some 6 hours earlier and I parked the car down on a level section of the main FSR, about 30-40 m away from a couple of large culvert pipes that were lying across the road further up. (That turned out to be a very wise move…) By 8.15 pm, with the light fading fast, we were on our way.

Thankfully it had stopped raining, but was still chilly and the surrounding vegetation was wet. The effort of hauling our packs uphill at a decent pace meant I was still in T-shirt and shorts. We were extremely thankful that the trail was easy (it was an old road bed) as it meant we could keep up a good pace. At some point it got dark and we were hiking by the light of our headlamps alone, which was kinda spooky especially as we heard movement in the trees beside us several times. As we gained height, the clouds cleared, turning to mist enshrouding the mountain peaks, and the night sky was revealed: an ink-black sky with more stars than you could count. It was a stunning sight. But we couldn’t stop and admire for long.

After an hour and a quarter of sustained uphill, we reached the turnoff for Blowdown Lake. Fortunately there were two motorcycles parked at the beginning of the trail through the meadows to the lake itself, otherwise we probably would have missed it. Let me say now that picking your way through wet, boggy meadows at night is not much fun! But within about ten minutes we looked up to see headlamps in the dark, and signs of a camp fire. At the same time, our lights were spotted and there was much rejoicing. We had made it. The time was 9.40 pm.

We made our way over to where Maria and Merewyn had pitched their tents and everyone was extremely relieved that we were here at last. We dropped our packs, and within moments I was freezing cold, so I pulled on my fleece and gloves. The fly sheet on the tent was already coated in a thin layer of frost… We spent some time catching up and telling each other our stories of the day, before hanging our food in a group of trees and retiring to our tents by about 11.30 pm. I have the following indelible image from that night: standing at the edge of Blowdown Lake, looking up towards the Pass framed by the slopes of Gott and Gotcha Peaks, seeing stars above and reflected in the lake. A beautiful sight. 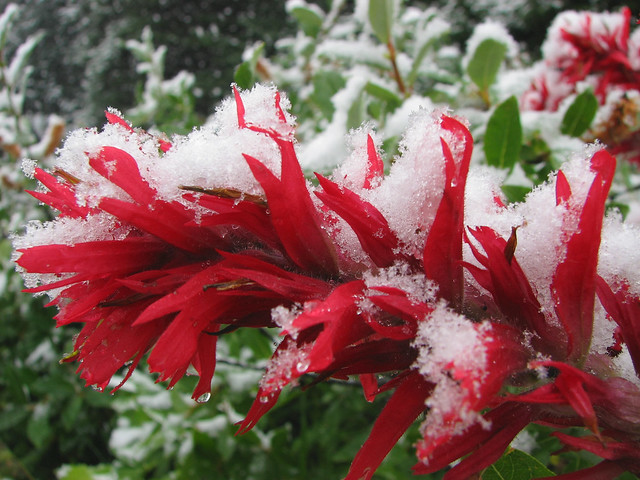 So what happened when I left Maria and Merewyn all those hours ago? Well it had started raining in earnest as they set off which soon turned to wet snow. They had taken their time hauling their packs uphill and by the time they had reached the lake, there was a couple of inches of snow on the ground. There were a few folks already at the lake (the motorcyclists), sitting out the weather under a tarp accompanied by copious refreshments ;-) They had built a fire and soon had a roaring blaze.

Within an hour or so, the clouds began to clear and the sun came out to melt all the snow, and allowed everyone to dry out a little. The camp-fire guys brewed some coffee and shared it round. Maria and Merewyn pitched their tents and warmed up in the sunshine. Of course, Merewyn couldn’t resist a swim, which the guys were naturally skeptical of (one of them had tried earlier and said how cold it was). And of course she showed them all up by spending about 20 minutes swimming around. One of the other guys simply had to prove his worthiness by joining her, but he didn’t last as long. 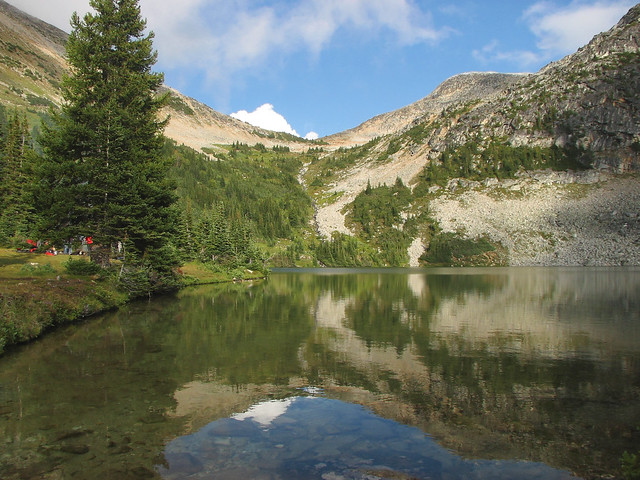 Towards sunset, Maria and Merewyn ended up over by the camp fire to keep warm, and shared a beer or two. Time passed, with them just getting ready for bed as we arrived.