Now the trip really starts! Last night was pretty damn cold, though that was largely my own fault as I should have worn more layers. We crawled out around 7.45 am to a bright but cloudy day. Patches of blue sky came and went, and the surrounding mountain tops were shrouded in dark, ominous-looking clouds. But giving up was not an option, and so we retrieved our food and wandered over to the smouldering camp fire to have our inaugural breakfast of the trip. The motorcyclists had coffee to spare and we gladly accepted, seeing as we don’t brew coffee when backpacking (too aromatic) and it would be our last chance for coffee until we exited the Stein Valley in six days’ time.

Occasionally the sun found a gap in the clouds and we basked in the brief periods of warmth. It was still quite chilly otherwise, and we set about packing up. At this point we hadn’t seen Christian all morning, but we figured he’d gone off for a short wander. By 10.30 am Maria, Merewyn and I were ready. Our packing-up session had accelerated when the first snow flurries came in, but for reasons unknown to everybody, I was still in shorts… Just as we were beginning to wonder where Christian had got to, he appeared and set about packing away his gear as quickly as he could. At 11.30 am we were all ready and began back-tracking over the wet meadows we’d stumbled across in the dark last night to regain the old road. 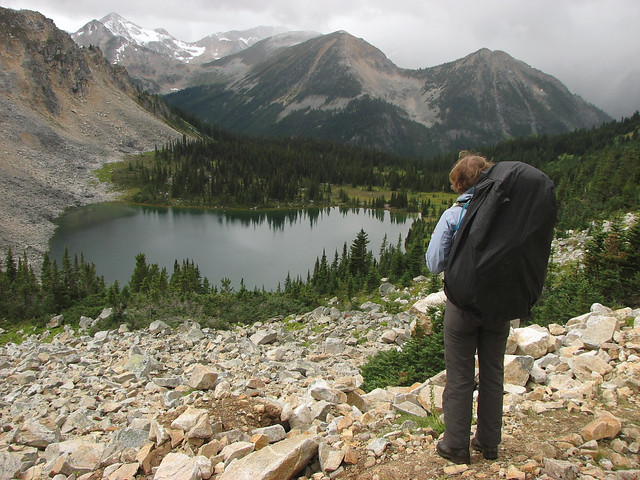 Within ten minutes we were out of the mud and we turned right to head towards Blowdown Pass. We were passed by a couple on ATVs, whom we soon passed again when the old road deteriorated to a foot trail only. Still more snow showers passed us as we enjoyed the cool mountain air, and stunning views of the lake and the talus-strewn slopes around its southern shore. Somehow it all seemed much more beautiful than when we were here in July 2007, and we all vowed to return to spend more time here another day. We joined the upper road as a particularly heavy snow storm came in, and we pulled on rain-gear to push on through. The ATV couple passed us again and we met a group of motorcyclists close to the pass. Large boulders prevented motorized traffic going any further so we waved good-bye and took the final few steps to the pass, where we had a view of… nothing. The snow was really quite heavy at this point and my legs were quite cold (uh, yes I was indeed still only in shorts). 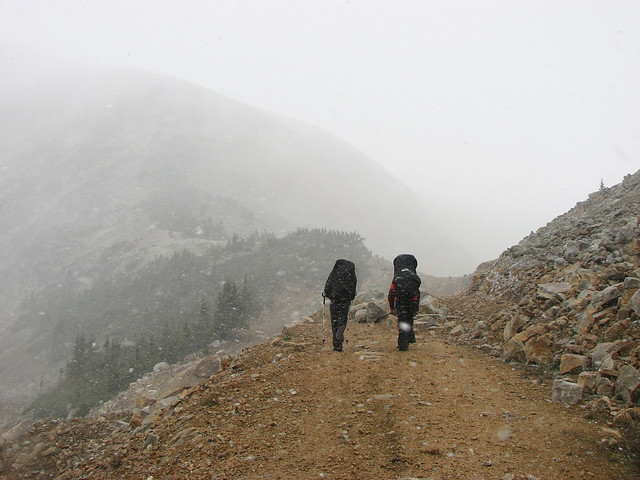 One more step and we were in the Stein watershed – woohoo! We still couldn’t see anything, which was just as well since we were not very keen on stopping to take it all in. We followed the old mine road, beginning our gradual descent through snow-covered flowers. Before long, the snow eased off and the clouds parted, allowing us to admire the views of the South Cottonwood Creek valley in front and Blowdown Pass and its surrounding peaks behind. And it was all beautiful. The ridgeline from Gotcha Peak looked particularly inviting.

All too soon, and just as the weather improved, we reached the treeline and our views were pretty much left behind. The road was easy hiking, although there were plenty of large stones to turn your ankle. We passed our first signs of bear presence (you know what I mean), then some utterly disgusting-looking mushrooms, before crossing a couple of creeks which just ran across the road. Wildflowers were still out here and there, but mostly we became surrounded by trees. After a couple of hours’ hiking we decided it was time for lunch, and we stopped at a clear point on the road with somewhat of a view of the valley. 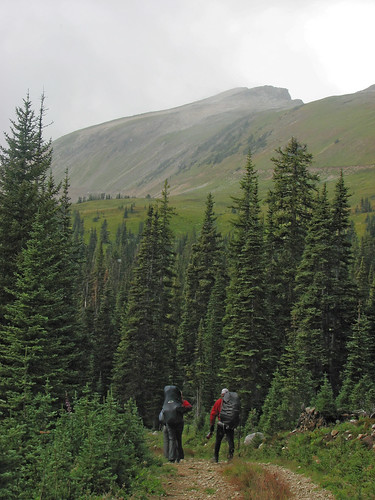 Continuing on, the sun came out for real and the afternoon became warm and pleasant. The old road crossed a number of open meadows, cleared by avalanches and here and there we were treated to nice views. We scanned for bears in the meadows but saw none. Autumn was clearly beginning to set in on these meadows, with the hellebore dying back to its rusty colours. At 4.30 pm we reached the spot we had eye-balled for our next two nights’ camping, a rough undeveloped site at the point where the road crosses the creek and heads up to the old Silver Queen mine. But we rapidly began to rethink our plans. There was a considerable amount of bear scat all through the camping area, some of it fairly fresh. Almost all of the rocks had been turned over, and the ground dug up in places. There was no escaping the fact that this was a bear highway. To make things even more unsettling, we found an old backpack under a tarp and hung from a tree. A quick investigation showed that it had no food (phew), only clothing and bedding, while off to one side was a cell phone, its battery lying a foot or so away. We checked it out and there was enough charge to check when the last call was made: almost exactly one year ago. Why was it here? Why had no one come to collect it? We were a little creeped out (unnecessarily so, really) and had a snack break to work out what our next move should be.

It was decided: we should move on to the next campground, a more developed site at the confluence of the North and South Cottonwood creeks. By now it was 5.30 pm, giving us about 2 hours of daylight to get there. With 5.5 km to travel, it would be a bit of a yomp to get there in time. But we went for it. At first, the trail continued along the old road, now deteriorating quite badly, marshy in places and with the occasional fallen tree to scale (a precursor of what was to come). Soon the old road headed over the creek again, while our trail took to the slopes and we gained a little elevation. All the while we were passing pile after pile of bear scat, so we made sure to stick together and keep up our chatter. 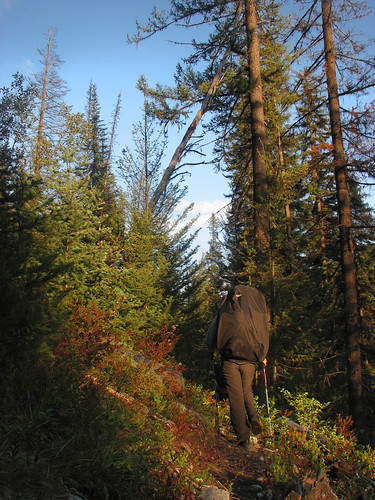 We trudged on, following the trail up, then down, then up again etc. Then over a dead tree, and another, and another…. We pushed on as quickly as we could but it was bloody hard work. Our packs were still almost full, and it was only the fact that it was our first real day on the trail that allowed us to push on and make good time. Our spirits were still high, the evening light was a gorgeous golden colour, and when the chatter ran out, we turned to the occasional song, joke or whatever to let the bears know we were here. Well, we never saw a bear, but we were still finding lots of evidence that they were around somewhere. 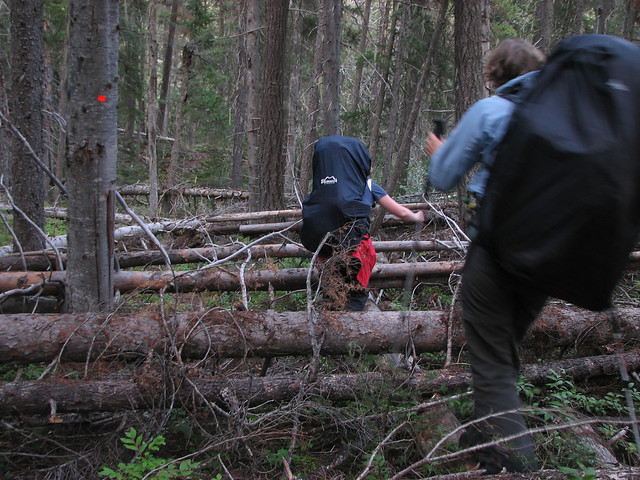 The sun set behind the mountains as we began our final descent through a massive area of fallen trees. Despite being as careful as we could possibly be, not all of us made it through without falling over. As the sound of the creek reaches our ears, we eagerly push on, passing a decrepit old cabin and forcing our way through an overgrown area of maples and alder. Suddenly we were at the bridge to the campground, and the light was fading fast. We crossed the bridge, carefully picking our way over a fallen tree which had smashed the hand rail and dropped our packs at the large picnic table. It was 7.30 pm.

We cased out the campground and picked our tent spots. We set up our tents as quickly as possible in the gloaming and reconvened for a well-earned evening meal. No need to hang our food as there was a metal food cache (although the door didn’t close properly and it was full of abandoned stuff and garbage – fortunately no sign of any animals). Maybe it was the hard work of the day, and the relief at making it to a decent campground, but that dinner tasted good! The first mice appeared just as we began our cleanup, which hurried us up a little, and we carefully cached our food, making sure than none of the little buggers got into the locker.

My indelible image of the day came as I was brushing my teeth, again. I was standing on bridge, brushing teeth and I saw something move out of corner of my eye. I scanned the bridge with my Maglite but saw nothing. Something made me look down, and there standing on the bridge between my feet was a mouse. It made me smile :-)

Ready for bed, we crawled into our sleeping bags, where the noisy creek lulled us to sleep. What a day…