If I remember correctly, I had a very pleasant night’s sleep. The ground was soft and the river a perfectly soothing background. We woke around 8 am to sunshine in the tree tops, and set about a leisurely breakfast. The air was pleasant and we were all in good humour. The campground didn’t feel anything like as spooky as when we arrived last night. In fact it’s quite a nice little campground (though the facilities are, err, DIY). Nailed to a tree in the centre of the campground was a sobering reminder of how remote we were. In 1994, a lone hiker had fallen on a log crossing the creek and broken his leg. To his incredible fortune, he was found several days later by a group out on a wilderness first aid practicum and subsequently evacuated by helicopter. Tales like that always make us stop and think carefully about what we’re doing.

We packed away our stuff and explored the area a little, enjoying the surrounding forest. Christian decided to do something about the rubbish left in the food cache, cheerfully replacing the weight he’d lost in food over the last couple of days. I was reluctant to leave this nice little spot. But leave we must, and we shouldered our packs and set off through the forest. 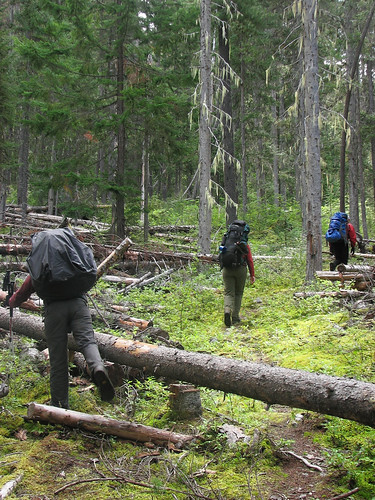 The trail began as a gorgeous narrow route through the forest, clearly visible and marked by orange squares nailed to the trees. Very easy to follow. Occasional bear scat to remind us of the locals, one particularly large pile was extremely fresh. Before too long, we crossed a fallen tree. Then another; and then another. And the pattern for the day was set. Walk a bit: crawl under a fallen tree; walk a bit; scramble over another fallen tree. Repeat ad infinitum. Ugh. Despite our restful night, we tired quickly. At one point we came to a small bridge over a creek where a tree had fallen almost exactly along the length of the bridge. All around us was Devil’s Club, so there was no going around and we ended up shuffling along underneath.

After about 90 minutes of walking through the forest we came to our first clearing, and views of the surrounding landscape. Someone (fire service?) had cleared an area, perhaps about an acre in size, and built a small wooden platform. On the platform was inscribed “Huckleberry Landing”. We had a good view down to the river, about 30-40 m below, and the peaks hundreds of metres above. We stopped here for a well-earned rest and a group photo or two.

It was warm in the sunshine, and we moved on with the greatest reluctance. Checking with the guide book was a little depressing. No mention was made of the clearing we were in, but we were supposed to be able to make it to Cattle Valley creek within 2 to 2.5 hours. We’d already been going for over two hours and from the map, we were nowhere near Cattle Valley Creek. Oh well, nothing to do but keep going and we picked our way over and under more trees.

After another hour and a half, we came to bluffs above Cattle Valley Creek. Here we decided to stop for lunch, given the time of day and the nice view down the Cottonwood Creek valley. And the pleasantly warm sunshine (did I mention that?). With lunch over, we headed downhill through some of our first stands of Ponderosa Pine and crossed the creek. Our guidebook claimed that the water from the creek is dodgy, but none of us could work out why that might be.

Once over the creek, what little wind we had was completely taken out of our sails by the next climb. The trail went more or less straight up the hillside, save for little jinks here and there which mockingly served as switchbacks. It was only 15-20 minutes of work but we were already exhausted. At least there were only a couple of small trees to get over. But it didn’t end there. Instead of levelling out, the trail continued to rise, oh-so gently but nevertheless, still upwards. The forest was more open here, with mixed stands of fir and pine, juniper and berry bushes. Tantalizing glimpses of views were had through the trees. 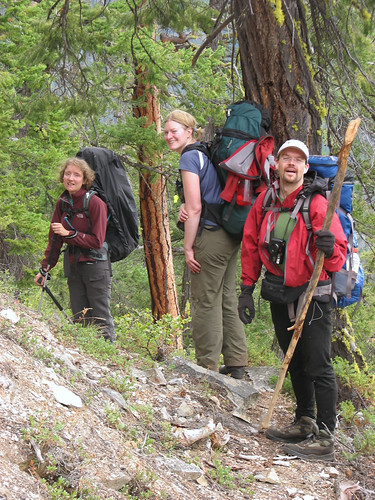 Eventually, the trail did begin to level off and enjoyment began to seep back into my soul. The terrain was drier, beautiful ponderosa pines were now common and we could see the creek was now a long way below us. We continued along the trail, which soon became a track on a steep hillside (complete with trees to get over or under). Looking down was now becoming a little dizzying and a tumble would mean a long and bumpy ride down the slope, hopefully stopping before the final plunge to the river… After negotiating one particularly steep dry gully, we paused at a small boulder field to rest awhile. The Cottonwood valley now looked more like a canyon, which made it easy to locate our position on the topo map. It was tempting to try and peer over the edge of the canyon, though getting too close was not an option. To our amazement, we continued to climb gradually and were relieved to finally begin our descent.

Soon we had our first glimpse of the actual Stein Valley, but our next obstacle lay before us: the aptly-named Unnecessary Knob. It appeared before us out of the blue and the trail up was a bit of a scramble in places, requiring careful foot and hand placement. Reaching the top we could see down into the Stein proper and the excitement returned. The Stein Valley could clearly be seen as an enormous U-shaped valley, an amazing sight. It also meant we were only a km or two from our campground. A night up on the Knob would be beautiful, though the practicalities of water and food storage gave us second thoughts. 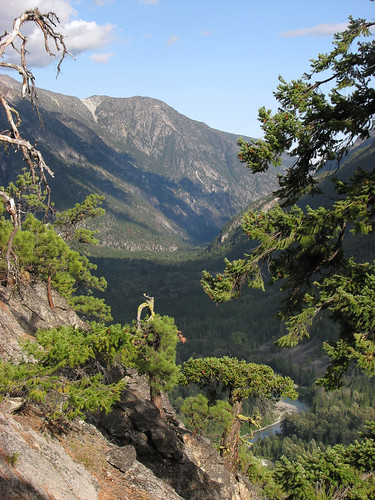 It was finally time to descend. Woo-hoo! Except coming down off Unnecessary Knob was harder than it looked. We did our best to follow cairns, but still found ourselves facing a narrow ledge with a nasty-looking 10-m drop onto boulders. Christian cleared the way, but it still didn’t feel right, so I backtracked and thankfully found the cairns again, leading off in a less-scary direction. With some careful bum-scooting and rock-surfing, we made our way down safely to the big fir in the middle of the boulder field the book had mentioned. And from there it was plain sailing, an easy walk down to the campground. We paused long enough to enjoy the views of the valley and Kent Falls from up on the edge of the canyon, before heading down on a carpet of ponderosa pine needles, catching the last of the warm afternoon sunshine.

Suddenly we reached a sign pointing to the Lytton trailhead, as well as back the way we had come to Blowdown Pass and within a minute we were at the Cottonwood Creek campground. Thank goodness for that! We could believe the day we had just had. It had taken us over 7 hours to go 8.5 km and we were all absolutely exhausted. Amazingly, Christian had kept count of the trees… and it worked to climbing over or under one tree every 100 metres or so. That trail needs some serious work.

After a quick respite, we explored the campground and set up our tents near a picnic table and a friendly-looking Inukshuk. And of all the luxuries: there was an outhouse. We located the food cache, and with its open aspect, decided to make it our dinner spot. Black bean soup follow by a hearty chilli. That was a good meal. Over our tea and hot chocolate, we discussed the option of a rest day. We all agreed it would be a great idea, and it truly would have been fabulous, but in the end we opted to keep going. After all, we were barely half way. 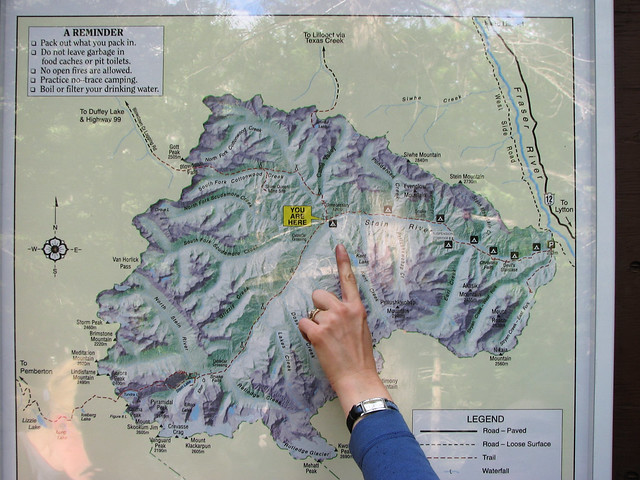 We cleaned up and were getting ready for bed when we heard a sound that made our blood run cold. A gun shot. Just one shot, over the creek to the west, probably no more than a few hundred metres away. What the…? Well, there was only one shot. Is that a good thing or a bad thing? Did someone just fire to scare away something large and furry? If so, was it now heading in our direction? Did the shot work? Or did the fact that we only heard one shot mean that the firer was now in the teeth of something hungry? Was it an illegal hunter? We each played out our own worst fears in our minds. We kept a watchful eye but saw and heard nothing more.

Right on cue, the small, furry and hungry mice appeared. We stowed our food in the cache and settled down for a pleasantly warm night. What a day…