Another peaceful night. We stirred a little before 8 am and enjoyed breakfast at our spot by the food cache. We washed up and headed up Cottonwood Creek to check out the cable car and Cottonwood Falls. It took us less than 10 minutes, and although we had no need to cross the creek, we couldn’t resist trying out the cable car. Christian and Maria got in first and hauled themselves across to the west bank, before Merewyn and I pulled it back for our turn. It was great :-) Very easy to haul two people and their packs across. The falls were well worth coming to see, a small but roaring drop of 20 m or so into a pool contained in a natural amphitheatre. They would be even more spectacular after rain or during the spring freshet. 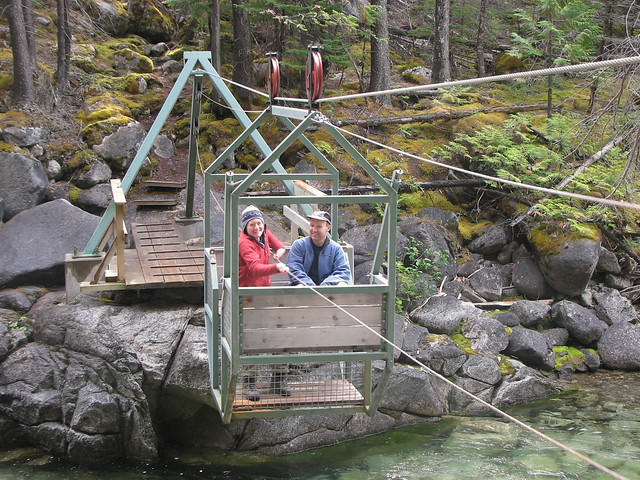 Back at camp, we packed up again and discussed our options for the day. There’s no doubt it would have been a beautiful spot to spend a day resting, but we figured that it would be best to keep moving. We were close to being ready when we heard an unfamiliar sound: voices. We looked up to see three hikers passing by, who stopped for a chat. It turned out that it was them test-firing a bear banger last night. They didn’t think anyone else was around and thought it would be safe to test. We told them our side of the story and we all had a good laugh. No doubt those guys were pretty hard-core: they’d hiked from the alpine down to Cottonwood camp in a day, and planned to cover the remaining 25 km or so to the Lytton trailhead today! Wow! Definitely fit, and carrying somewhat lighter packs than we were. But I can’t help thinking that blasting through at that speed means something is missed, especially in a place such as the Stein.

We wished them luck and they were gone, leaving us to finish our tear-down. We explored a little more, heading down to the bridge over Cottonwood Creek, and generally taking in the peace and grandeur of the valley. Even then, we were under way by 10 am, and I cannot tell you how good it felt to be walking along a flat, soft trail with no (or at least very few) trees to tackle. 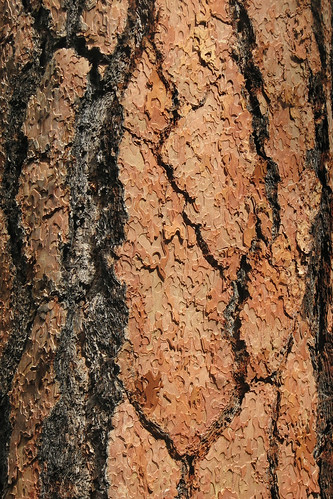 And yet it was still hard going. There’s no doubt we were all still really tired by yesterday’s exertion and I don’t know how we would have coped with more of that today. For now we were just grateful for the easy trail, and kept going. There’s not much to say about this stretch of the trail. Our path took us through alternating open woodland of ponderosa pine and swampy cottonwood and aspen territory (with some of the biggest of each that we’d ever seen). Occasionally we had views of the canyon walls, extending far above us. After a few km, we caught our first sight of the Stein River when the trail meandered alongside the lazy, jade-green waters. I was amazed at how gentle the river was: I expected more of a raging upland river, much like Cottonwood Creek. Almost an anti-climax, but it was still a bit of a milestone to reach the river itself. In any case, the green of the river blended in with the green of the foliage and the bright green wolf lichen to fill our eyes with every imaginable shade of green. Quite incredible really. 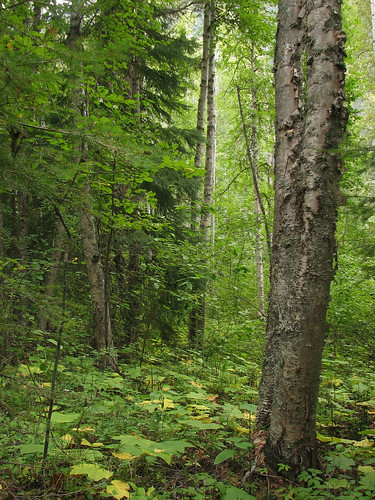 Within a few km we reached the rocky outcrop of Swamp Bluffs, once more a little tricky to navigate with an overnight pack. Maria skinned a couple of fingers on the sharp rocks while maintaining her balance. Ouch! We were hoping to find a suitable lunch spot (the book mentioned great views of the valley) but our efforts went unrewarded and we stopped by a couple of fallen trees a short distance beyond the rocks. Lunch was fairly subdued due to fatigue, and the fact we were pretty much just sitting at the edge of the trail to eat! A few drops of rain fell, enough to prompt rain covers to be pulled onto packs but not really enough to require waterproofs. 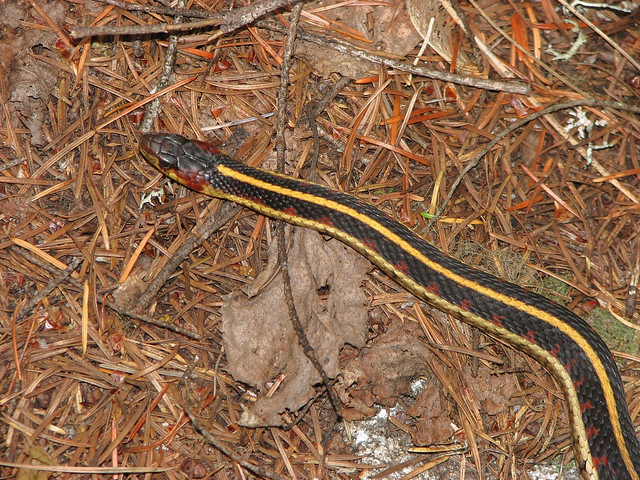 Despite the easy terrain, our progress was slow. Thinking back, it’s hard to remember just how tired we were. We passed through more swampy forest with even bigger cottonwoods, then more open forest (with even bigger ponderosa pines!), startling a garter snake or two (including one that sat stock still for a couple of minutes allowing us to get some close-up photos, and in my case some very boring video…!). We came to the four branches of Ponderosa Creek (though we didn’t know it at the time), passing over a dry channel, a bridge, another dry channel and another bridge before coming to Ponderosa shelter. Except that we weren’t convinced that it was the shelter since it looked in need of some repair, and the guidebook had mentioned a dilapidated lean-to. We spent much of the next half an hour trying to interpret the author’s writing and relate it to our surroundings, even going back almost a km along the trail (in the direction of the author’s description) to find the outhouse and food cache. We eventually concluded that this was indeed Ponderosa Shelter, and we had reached our next camp site.

I think given that we were tired and that it was dull and threatening rain and that the shelter looked not-very-inviting, our spirits were not very high and it almost seemed like anywhere but here would be a better place to spend the night. But we picked our spots, pitched our tents and set about spending a few hours relaxing. The shelter was clearly a popular place to camp judging by the extensive camp fire and etched graffiti. We found a spot right next to the river to make a cup of tea and right on cue, the sun came out to soothe away our cares. 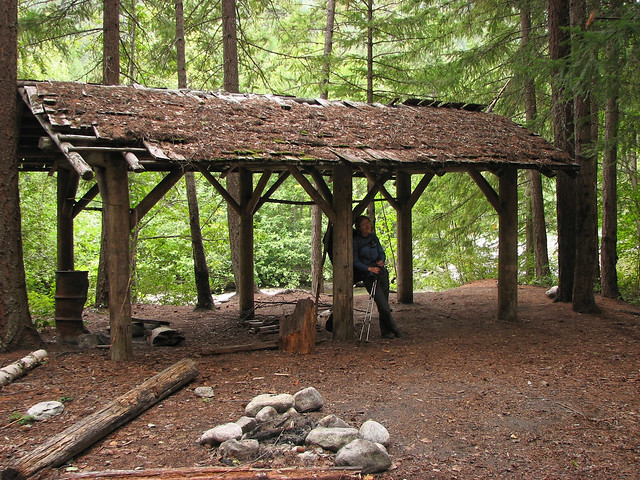 In fact, it warmed me up enough to make use of the river to bathe, followed by Christian and Merewyn (of course!). A quick but pretty chilly dip. The river was much colder than I expected, and I still don’t know how I managed to even get in! Drying off, we decided it was time for dinner and enjoyed a relaxing meal by the river. We’d found our groove again. Gradually the sun dipped below the mountains and the air cooled, prompting us to pack up and think of bed.

Earlier, Christian had gone exploring and came back to tease us with tales of interesting things in the area, including a giant tree felled for no apparent reason. Hmm…. I had noticed something marking a boundary on the map in this area, presumably an old land claim. Anyhow, just as dusk falls, Christian persuades us to follow him into the woods, past a private property sign and along a faint, but well trodden trail. Soon we spot a cabin – aha, someone has an old cabin up here. That was good enough for me, but some further exploration was deemed necessary and while Merewyn and I hung back (sticking in pairs for safety), Christian and Maria went in for a closer look.

By now it was too dark to see very much and soon we all headed back to the campground for the 15-minute trek to cache our food and make ourselves ready for the night. Just as we left the cache (where Christian did his best to scare us – didn’t work :-) I heard rustling in the bushes and stopped to shine my headlamp, where I saw…. a toad. A really big toad, too. We all bent down for a closer look before hurrying back to our tents and the promise of a very cosy night.