We crawled out of the tent around 7.30 and trudged all the way back to the food cache to use the facilities and collect our food. We ate breakfast down by the river and were greeted by patches of blue sky and warm sunshine. It was so soothing and peaceful by the river, the perfect way to come round in the morning.

Getting ready was a slow and steady process but by a little after 9.45 am we were ready to leave. Just as we were almost ready, Christian disappeared back to the cabin for another look. Okay… but no big deal, as we were almost ready to go so we figured he wouldn’t take very long. Well, half-an-hour of sitting by the river later (admittedly no great hardship) and Christian reappeared and told us all about the cabin. I don’t think I was alone in having misgivings about poking around in other people’s stuff but I kept it to myself.

With packs hoisted onto ours backs again, we set off through the trees at about 10.30am. The trail was easy but we were still very tired and our progress was quite slow. The small ups and downs across a couple of boulder fields seemed to take a lot of effort. But we did spot our first pictographs along this section, neatly hidden from us going east (though they would have been obvious to anyone hiking west). We dropped our packs and took photos, eagerly scanning the area for more. 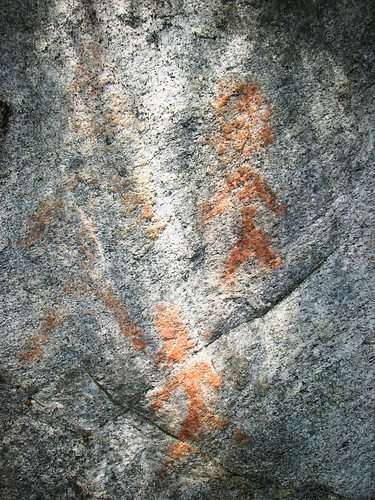 After about an hour and a half we reached Snake Bluffs where we considered finding a nice sunny spot overlooking the valley for lunch. Except we never found a suitable trail to take us up safely and so we trudged on. As we dropped down from the bluffs, we realized that the first little side-trail we saw right at the start was our one and only option. We couldn’t face back-tracking and instead just carried on in search of somewhere else to stop for lunch.

Our path took us close to the river again and past huge cottonwoods and ponderosa pines, pushing our way through bushes that were head-high and beyond. It was somewhere around here that, in an effort to keep making noise to alert any bears of our presence, I launched into “An Ode to Bushy Bits…”. Except I got no further than the opening line as Merewyn and Maria collapsed in helpless fits of giggles. Of course, that simply had to be added to the quote file… 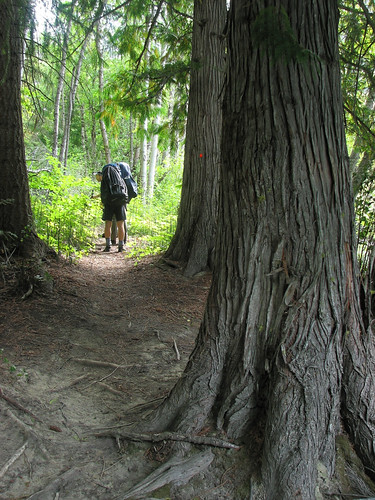 So we pushed on through those “bushy bits” (which were naturally located in the, ah, most humid places…), skirting the still-lazy river in places. We then met our next hiker, a lone guy hiking in as far as he could go in a couple of days. We stopped and chatted for a few minutes, and wished him well with this trip. From his description, it sounded like a bit of a “walkabout” or spirit journey he’d embarked on. Hope he had a good time. Within a short distance we came to the next campground at Lean-to Creek and decided this was our best lunch option. We perched on up-ended logs around an old camp fire near the food cache and lazed around in the warm sunshine. 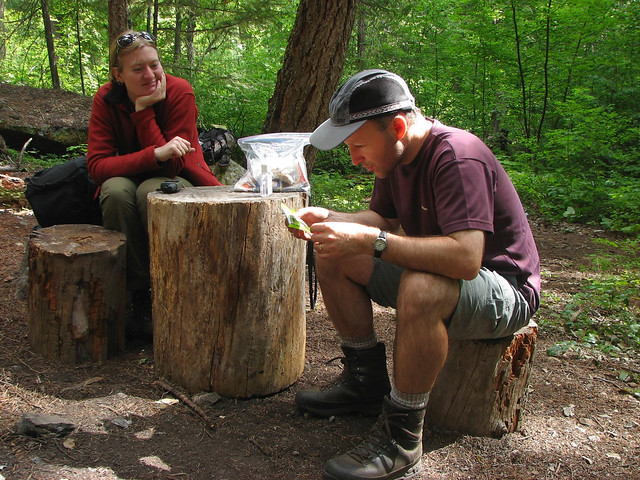 Our lunch hour didn’t last as long as we’d hoped and we reluctantly dragged ourselves onwards. More cottonwoods, more bushy bits and some more open Douglas fir and ponderosa pine forest.. The trail returned to the river’s edge and we reached the next landmark, a rough camping area on a bend in the river. We stopped for a break (we seemed to need plenty of those) at the very welcome picnic table, and explored the novel food cache. Instead of a metal locker, the cache here was a loft about 15-20 feet off the ground, reached by a removable (and rather rickety) ladder. Since bears and squirrels can climb trees, we didn’t think it was the best solution, and felt that this camp would not be our first choice. Despite the warm day, the entire area was in shade thanks to some enormous cliffs on the south bank of the river, rising over 1000 m almost straight up. Quite awe-inspiring. 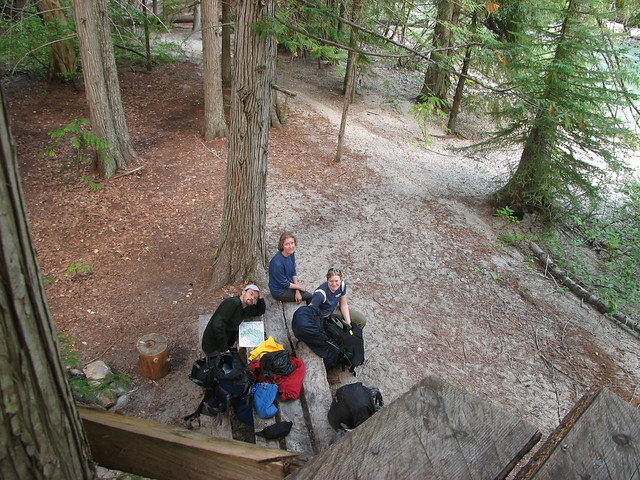 As we walked on, we found a small teepee made of logs and couldn’t resist a quick photo-op or two. Nearby, we passed red cedars which had had their bark peeled, and then encountered the biggest cottonwood tree we had ever seen. It was enormous. Moving on, the trail followed the river quite closely (since it had nowhere else to go in the narrow canyon) and we came to the spot opposite Klein’s Cabin. From here the river began to change from the lazy expanse of jade to something more like a mountain river with rapids and rocks. We passed the site of the old cable car crossing and moments later came to the lovely suspension bridge at the Lower Crossing.

We crossed the bridge, admiring the views upstream and downstream, and were soon in the lovely open and welcoming campground. We picked our spots and unpacked our gear, happy to be able to rest once more. I hung my wet laundry from a small cedar to dry in the warm afternoon air. And once again we had the campground to ourselves. We still couldn’t believe that we had the place to ourselves. 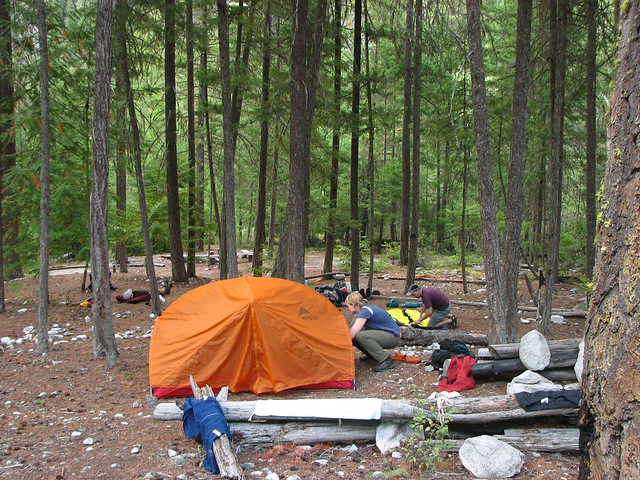 With nowhere else to go, what do you do but sit around, drink tea, eat dinner and enjoy the beautiful surroundings…