A noticeably warmer night, and we awoke to more warm sunshine. We had a fairly leisurely start and took time to soak up the sun. Leaving the campground, we soon encountered a deep washout channel which ran down from a gorge in the cliffs above. It was as if a huge plough had come through and gouged a trench into the earth, 5-feet deep and more than 20 feet wide, pushing rocks and trees aside. Of course, it was completely dry but we all stopped to take in the scale and power of melting snow. 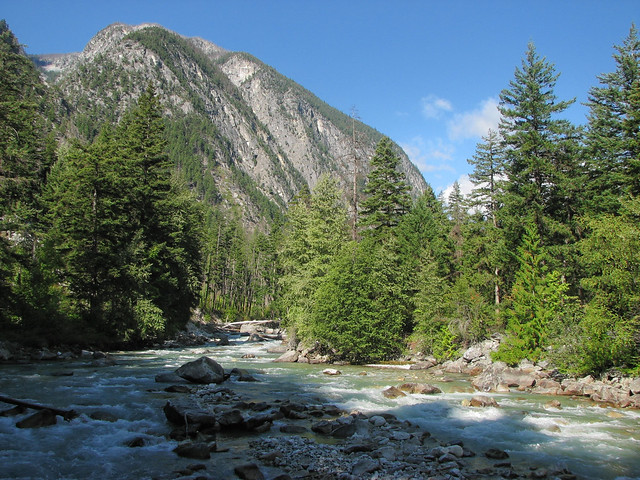 The trail was easy and flat mostly with a soft sandy surface. The river was definitely wilder here, and made for a constant noisy companion. We soon reached the first major set of pictographs on an outcrop at a bend in the river. The book described this as a magical spot, and it was right. Here we saw an extensive array of pictographs, showing – well, what? At some level we’ll never know, as they usually formed part of a spirit quest and came from dreams. But the magical creatures painted in ochre on the pale grey rocks captured our imagination. One large pictograph appeared to be a creation myth, depicting a universe with stars (akin to the firmament of old western-European beliefs) and people on the ground, with weird animals outside, perhaps in another realm. Who knows? The main impact was that they were from not much more than 140 years ago, before significant European contact with the indigenous people of this area. And that, to me, was amazing. None of this thousands-of-years-old stuff, but recent – only a few generations old. Living history.

Somehow we dragged ourselves onwards, knowing that we had more (and more impressive) pictograph encounters to come today. We followed the river downstream, occasionally right alongside, occasionally on flat sandy benchlands. We spotted our first ant-lion pits, small circular conical depressions in the sand. We were careful not to disturb them.

Further on we crossed Earl Creek on a rickety log bridge and came to the famous Earl’s Cabin. The cabin was falling apart, and we later read what we saw was a reconstruction. Someone had lit a fire inside, charring a large part of one corner (idiot). Looking around, it must have been quite a lifestyle to have this place pretty much to yourself. But then, we were there on a good day :-) A very pleasant day in fact. Perfect temperatures for valley hiking. This area was also a campground and it would make for a very nice place to spend a day. 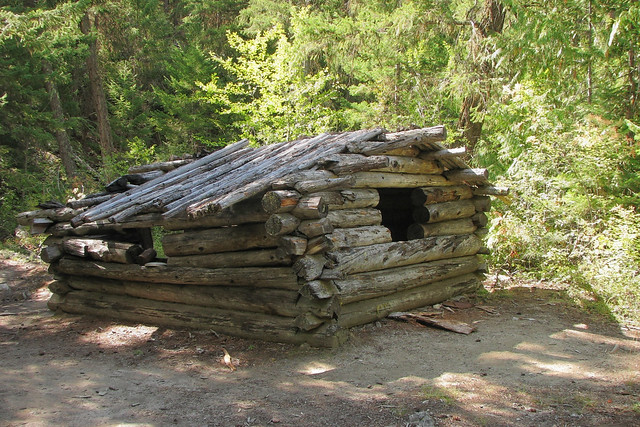 Beyond Earl’s Cabin, we came to and crossed Teaspoon Creek as it passed through a nice cool grove of cedars. Here and there we saw trees with their bark partially stripped, so-called culturally-modified trees (CMTs), evidence of their use by the local people. A bit further on we came to the Teepee campground, and decided that this would make a good spot for lunch. We found a shady spot with access to the river and plonked ourselves down. Across the other side of the river, we could see another impressive snowmelt trench, which is a nice waterfall in spring, according to the book. Despite sleeping well and having only 8.5 km to hike (and on the flat), we were all still pretty tired from our first two days’ exertion. Reluctantly, after an almost 2 hour lunch break, we hauled on our packs and continued on down the river.

We wandered on in the warm afternoon sun and soon came to a gateway comprised of two large rocks sat either side of the trail. We figured this would be a good place for our next break, and as we dropped our packs, we noticed more pictographs on these rocks. We had been anticipating the turnoff to the site of the most extensive set of pictographs for some time and, just as we began to climb, we found it. We crossed the log as described in the book and descended to the river bank. 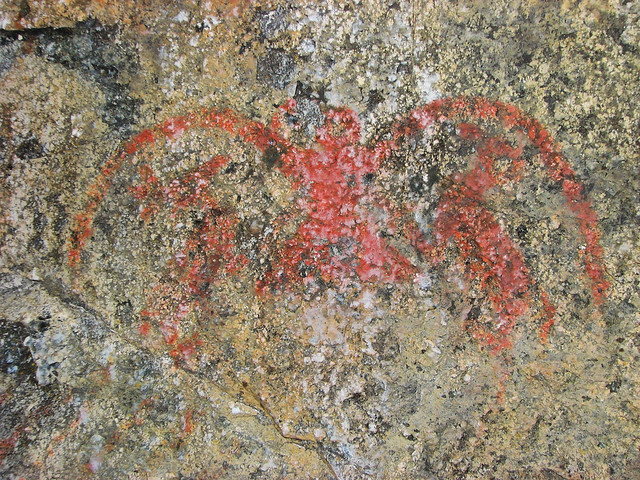 Here, at last, was the “power spot”. The vertical cliffs towered over us, maybe 60 feet, with the river barely 20 feet behind us. There was no way to avoid getting up close and personal with these pictographs. And they were everywhere along the cliff, up to about 8-10 feet off the ground, depending on the availability of good rocks or trees to stand on. We dropped our packs and set about exploring and taking umpteen photos on even the smallest red smudge. More strange fantastical creatures and images. A lizard; a deer (or elk) being hunted; a face; a rising sun (or a jellyfish?); and our favourite (which is the symbol of the park), the creature with two heads and outstretched arms (wings?) sheltering a deer and a sheep or goat. Our photos don’t do the pictographs justice, though Andrew later did a great job enhancing a few of them.

Even the river ran quieter here. Yet another place to add to the list of amazing places in the Stein Valley. We explored and admired for ages, and once more moved only only with the greatest reluctance. Our path climbed up onto the boulder field of the Devil’s Staircase. For a kilometre or more we picked our way along a rough trail of flattened rocks and boulders on a precipitous slope above the river. We crossed another meltwater channel, pausing long enough to look up and down its dizzying path, before encountering the largest stretch of open boulder field.

We enjoyed the open views of the river almost a hundred metres below us, and the massive canyon walls on the opposite bank. From here we spotted four white-water kayakers heading down to the river – our first humans in a couple of days! Looking back upstream we could see the deep V-shape carved by the river, very different from the wide-gentle U of the upper valley. Looking east, we caught our first glimpse of the end of the trail, where we could see out of the Stein Valley, and the realization that the trip was almost over. We then descended via a series of switchbacks and reached our final campground in the Stein, the Devil’s Staircase camp. 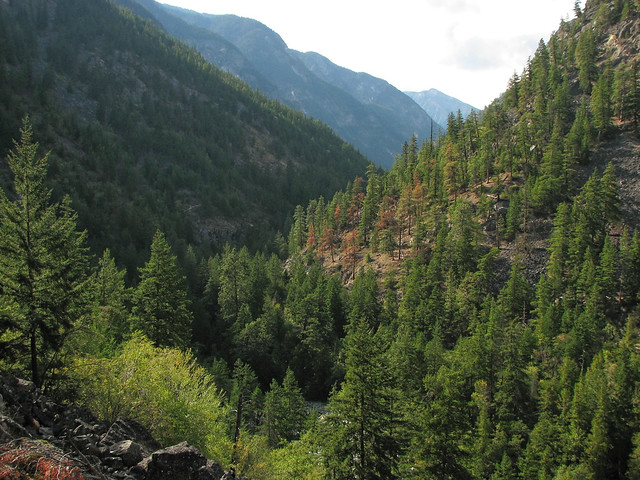 Wandering in to camp, we found it deserted once more and spread out among the trees. The kayakers rode by on the rapids, and if they saw or heard us, they gave no sign. What else to do but relax? We picked our way down to the river and cooled our feet. Maria even opted to swim in the warmer-than-at-Ponderosa-shelter-but-still-chilly water, finding a small calm pool to dip into. A cup of tea followed, then dinner, then our final night on the trail. As ever, at this stage in the trip you reflect on how it’s suddenly so close to being over, and we chatted about where we were and what we had seen. And I think we all felt quite similarly. It wasn’t a place that grabbed with eye-candy views, except at the start by Blowdown Pass, but it was a place that grew on us, gradually becoming somewhere we settled in to.

The warmer air allowed us to sit up for longer than previous nights, but our bodies demanded more sleep.