The Coquihalla area is somewhere we’d wanted to explore for quite some time but had always put it off due to the distance from Vancouver. Finally we put all our excuses aside and made an early start, reaching the trailhead for Needle Peak in exactly 2 hours. That was less than expected, and another area opened up for exploration.

It was just us and Andrew today, one fine Sunday morning. We parked up at the rest stop underneath the spectacular Yak Peak and headed under the highway back to the trailhead on the south side. We headed up into the trees, gradually at first, then somewhat steeper. It was quiet and I wondered if we’d encounter any wildlife, so I made a little more noise to make sure we didn’t surprise anything. It must have worked as we saw nothing! 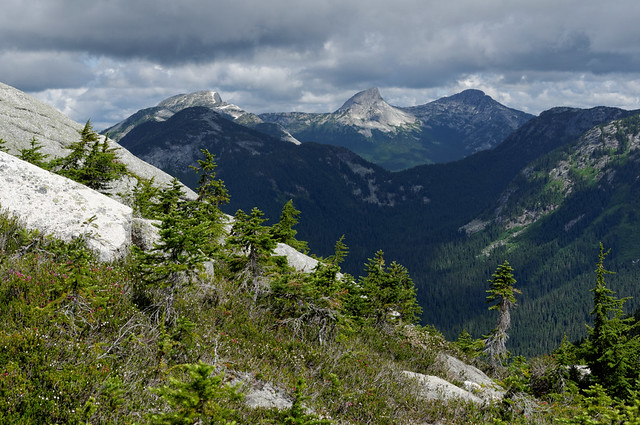 After a mere 30 minutes or so the trees began to thin out and we got our first views, looking north across the highway to the peaks beyond. There is no doubt the Coquihalla is amazing country, and as usual we wondered why we hadn’t made more of an effort to get out here before. The gradient eased as we continued up and we found ourselves walking easily through subalpine forest with occasional tree-free outcrops for views. We had to keep pinching ourselves (or the equivalent) as we couldn’t believe how gorgeous it was.

We paused at one rock with views all around. Needle Peak looked pointy and daunting from down here, but in other directions lay easy ridges and plateaux. This country was made for exploring! A few annoying blackflies joined us but didn’t get in the way of our picture taking. We carried on, passing through small meadows covered in lupines. Pink and white heather bloomed all around us, and our senses were treated to the scent of sun-warmed subalpine firs. Summer in the mountains. 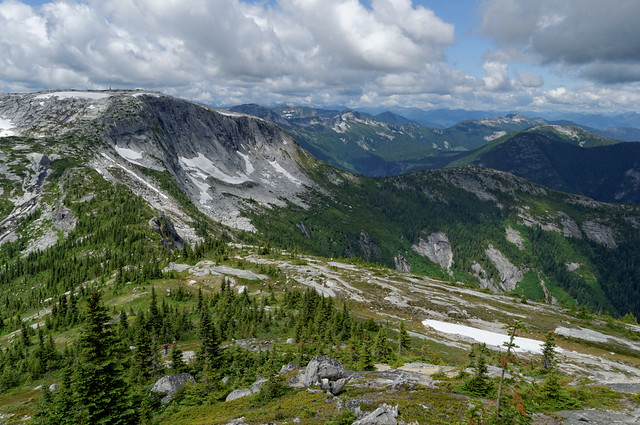 Once out of the trees the trail meandered and braided. We followed flagging and cairns and before long came to the base of the ridge with Needle Peak. To our right lay a plateau, reached by another ridge. Since we knew that there was a tricky bit to come on the scramble to the summit, we cased out the plateau and came to the conclusion that it would make a fine destination in itself.

As it turned out, we never made it that far! We were expecting to run into difficulties on the final climb to the peak. In fact we were stumped by the initial climb onto the ridge. We tried three different ways and each led to a dead end for us. One way looked tricky and exposed, one way led into a dead end gulley, the other was blocked by a huge keystone. The granite was grippy, but very coarse and sharp and all of us ended up with grazes of one kind or another. I picked up a trio of parallel scratches which looked like I’d been snagged by something with claws.

We watched a couple struggle up the first (and obvious looking) way we’d tried. They made it but they made it look hard. By now we’d spent our energy trying to find an alternative route and decided that we would go an explore the plateau instead. Someone on Club Tread had called this area the Flatiron, which confused us no end as we could only think of the Flatirons near Boulder, Colorado. Oh well, to the Flatiron we went. 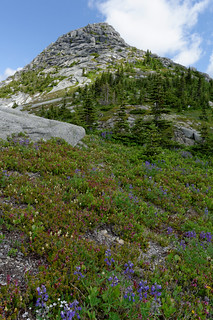 It took about 20 minutes or so to get over to the plateau and as soon as we were there we forgot all about Needle Peak: this area was just gorgeous! A broad open summit (with a radio repeater station) with views in every direction. We explored a little and found a slightly more sheltered spot to have lunch, in view of a large bowl with another gentle ridge behind. Andrew pulled a small watermelon out of his pack and cut it into pieces for us to share. Fabulous! Better than Gatorade, any day :-)

We lounged around a bit more, before dragging ourselves to our feet to do some more exploring. Meadows, tarns, mountain-goat hoof-prints… It was all so beautiful. We skirted the edge of the plateau (which had sheer cliffs on this edge) and spotted a couple of ptarmigan. We found we could get really quite close (as we’d done on the Mt Robson trip) and got some nice photos. From here we wandered over to a small snowfield on the eastern edge of the plateau, overlooking a small lake (nicknamed Tasty Lake by someone on Club Tread). 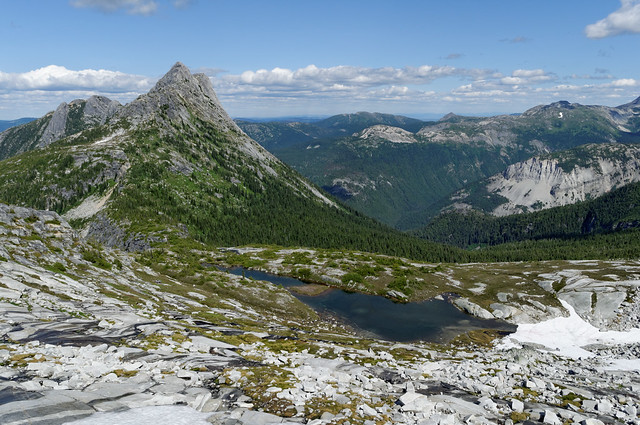 We followed the snow to the top of a potential slide down to the lake. It looked quite steep, but maybe not too bad, so we went for it. Andrew glissaded down quite neatly, and was proud that he stayed on his feet for the whole descent. Then Maria slipped and slid down on her bum (at an alarming speed from my perspective), managed to miss the rocks and came to a halt near the lake. I tried glissading, but soon overbalanced and ended up bum-sliding. I tried to use one of my poles as a brake, but all that did was turn me round so I was sliding on my belly. Then I turned again, still on my belly but now face first, plummeting (or so it felt) towards the rocks below. I frantically tried to stop myself with my hands but it was hard, especially as I couldn’t see a thing – I was acting like a snow-plough and all I could see was white. And it was COLD! Eventually I did slow down enough so that when I reached the rocks I could put out my hands to brace my minor impact. I had snow all over my face and behind my sunglasses. My hat had come off somewhere up the slope and when I went back to retrieve I found myself thinking that it felt really steep! In retrospect, definitely not the best of decisions. Maria had grazed her thumb trying to slow down; my hands and fingers tingled for most of the way back to the car. Not recommended :-)

Andrew went in for a swim. We walked around the lake to the small island in its centre to join him, and cooled our feet (the rest of me was quite cool enough thank you!). We rested here for a bit, soaking in the serenity. A well-named lake, for sure. It even had a few good camping spots and we soon formulated a plan to return here to camp for a night. 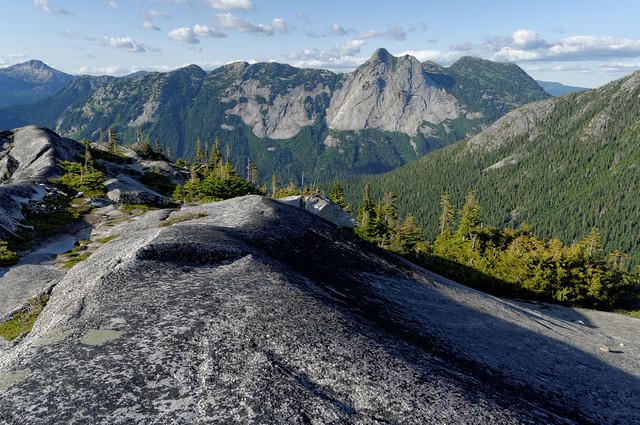 Reluctantly we pulled ourselves away from the lake and began our walk back to the car. It was slow going as the sun was out, the afternoon light was warm and the scenery was spectacular. We reached the Needle Peak ridge and paused to look at it once more. Then it was time to retrace our steps down the ridge we came up in the morning, taking photos all the way. We were soon back at the car and heading home, not quite believing the beauty we’d just spent the day admiring. We will return.

Distance: about 12 km
Elevation gain: about 750 m
Photos on Flickr