Our big backpacking trip of the year: a week exploring the Mount Assiniboine area in the Canadian Rockies with Merewyn, Victor and Jennifer. The trip began in Banff National Park, where we caught a shuttle bus up to the Sunshine Village ski area on Monday 27th July. From there we crossed the Alberta-BC border into Mount Assiniboine Provincial Park.

The first day was long and trying thanks to the distance, heavy packs, the terrain and the rain. We made it to Og Lake just before nightfall and endured a miserable first dinner standing around in the pouring rain. Day two was better and we packed up in sunshine, reaching the Lake Magog campground before it rained again. On the third day we climbed the nearby Nub Peak with its classic views of the core area. On day four we hiked to Windy Ridge on a beautiful clear sunny day, which gave us alternative spectacular views.

On day five we hiked to the Wonder Pass viewpoint before waving goodbye to Victor and Jennifer as they took a helicopter flight out. We then packed up and hiked back to Og Lake just as the holiday-weekend hordes descended on Lake Magog… Og Lake is much nicer when it’s not raining…

Our sixth day saw us revisit the Valley of the Rocks and the slog up Abandoned Tent hill to spend the night at Howard Douglas (aka HoJo) Lake. That made our last day a simple 6 km hike out back to the trailhead, via Rock Isle Lake and its day-trippers. Time for a well-earned cold beer before catching the shuttle back down to the car. 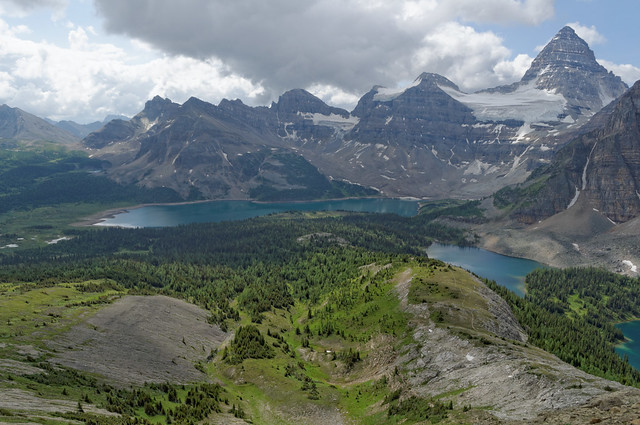