A new destination, not in any of the hike books, which turned out to be a great shoulder-season hike. Andrew had suggested it but then couldn’t make it after an epic trip up to Vicar Lake the day before. We had originally thought of just doing the next stretch of the Baden-Powell trail since we had access to two cars, but the weather forecast improved and the prospect of a view meant we opted for something new.

We picked up Gabriela and Merewyn and headed to Lions Bay, parking up at the trailhead for the Lions and other hikes. The first portion followed the same logging road as the route to the Lions, but after a bit under an hour of slogging uphill we reached a junction with Tunnel Bluffs, Mt Brunswick and Hat Mountain signposted off to the left, the Lions and Mt Harvey to the right. The route looked quite overgrown and underused compared with the road so far. But within a short distance we found the appearance was deliberately deceptive. The road narrowed to a hiking trail, the rest of the road covered with moss and encroaching trees. A few small trees had fallen across the trail which we had to pick our way through. What looked overgrown was in fact a recovering logging road, and it was a sheer delight to walk along. Further along the trail we encountered signs encouraging hikers to leave fallen trees in place to prevent dirtbikers and ATVers from tearing up the trail. 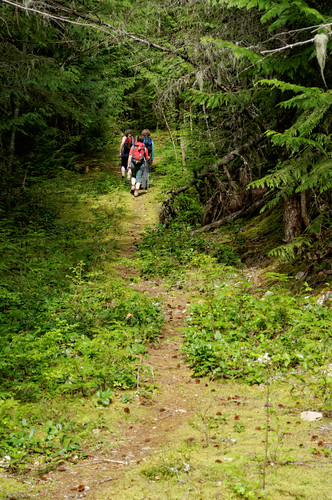 Even better, the road was level and mostly followed the contour of the mountain. We splashed our way through a tiny creek before reaching Magnesia Creek, which I’d read can be hard to cross in times of high water. Fortunately the water levels were low enough for us to cross without getting our feet wet, although it wouldn’t take much more than what we encountered to make things a little trickier. We continued on in warm sunshine, crossing a few more fallen trees (as mentioned above, labelled with signs requesting that they not be cleared) and another small rushing creek.

Within a short time we reached the well-signed turnoff for the bluffs. We climbed up a small knoll and entered a clearing with bluffs ahead of us. We climbed up the rocks but weren’t sure which way to go from here as the flagging ran out. We opted for the trail which headed west, following what appeared to be a faint trail through the knee-high salal bushes. Even this ran out after a short distance, though we could clearly see the bluffs about 50 m further on. However, we weren’t entirely sure, so I carried on while the other three back-tracked to the rocks and sought an alternative route. We quickly realized that I was in the right place as there was no other route, only dense forest. 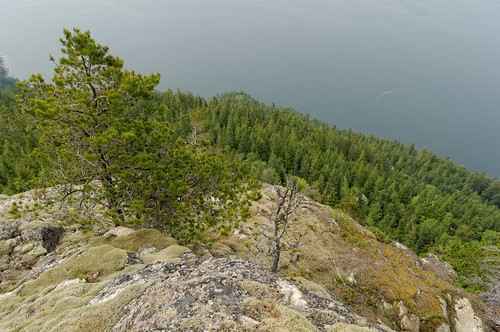 We thrashed our way through the remaining salal and emerged onto the dry mossy bluffs to be greeted by an amazing view down over Howe Sound. Wow – what a reward for what felt like relatively little effort. We’d left the car less than two hours ago, and here we were with one of the best hiking lunch-spots in the area! We had a clear view of Mt Harvey, Lions Bay, Bowen and Gambier Islands, and much of Howe Sound right round to Anvil Island: more than 180 degrees with nothing in the way. Amazing.

We plonked ourselves down on the soft moss and had a very leisurely lunch. We lounged around for nearly two hours, alternately dozing in the warm hazy sunshine and soaking up the view. More than usual it was with the greatest reluctance that we dragged ourselves back to our feet and headed back to the car. 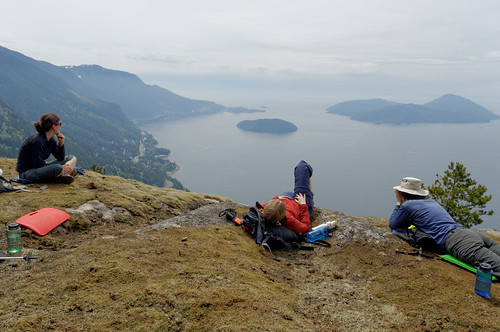 We retraced our steps with ease (I’m convinced this trail could be done in winter it’s so well marked) and rejoined the Lions logging road for the final descent. Rounding one of the switchbacks we were halted in our tracks as we spotted a lone deer browsing at the side of the trail. We moved slowly down the hill to avoid startling it and managed to get close enough to snap a couple of photos before it darted for cover. A nice way to end the hike!