Our first trip with the new car :-) We picked up Andrew and his sister, Erica, before collecting Merewyn and speeding our way east along Highway 1 to Chilliwack. We turned off the highway, and wound our way up to the Elk trailhead. As we rounded one sharp corner, a couple of deer leaped over the barrier into the road and I had to brake pretty hard to avoid them. That was a close call of the kind we’ve not had since we lived in Maryland. We hit gravel for the last km to the trailhead and enjoyed a smooth, easy ride to the parking lot – which was full. Except for one last spot where a car had recently pulled away. We parked up, pulled on our boots and got under way.

It was a pleasant sunny morning as we wandered up through the trees. Bright sunlight lit up patches of the forest floor, reflecting off fresh bright green vanilla leaf plants. Though reputed to smell like vanilla, they just smelled like green leaves to us. Budding Queen’s Cup plants were scattered here and there, which surprised me – I was expecting to see more of them in flower, but it is only June. The prize was finding some wild ginger in flower, and though the light was poor, I stopped to try and get a decent photo of them. That didn’t really work (though I succeeded on the descent) so I ran to catch up with the others.

The trail got steeper, as expected, and we chatted our way up Chilliwack’s Grind. I was briefly stopped once more by the sight of a single morel mushroom spotted by Maria, before we continued upwards. New growth was all around us, and the day felt like summer. As we reached the (even) steeper upper sections, we began to encounter trillium, which took me by complete surprise. At last, Elk’s deception ended and we broke out of the trees to reach the first rocky overlook. The views, as ever, were quite spectacular, with only a little haze to cloud the view in the valley.

We paused for a snack break and to take in the view – it was, after all, Merewyn and Erica’s first time up here. A few flowers were out here and there, particularly the wild strawberry and phlox. Further up the trail we saw more and more trillium, some only just blooming as the snow melted. They were undoubtedly some of the prettiest trillium I’ve ever seen, miniature (alpine) versions of the valley flowers I’ve seen before. We gained more elevation, soon reaching the point where the trail levelled off for the first time, and from where the paragliders launch.

It’s easy to think about stopping right here – you’ve put in the hard work and you have your spectacular reward. But we wanted to move on and gain the spot with the best views, at the cairn. More flowers greeted us, though the peak bloom was another few weeks away. Now for a confession: one of the reasons I wanted to do this hike was the fact that I’d seen photos of glacier lilies. As we hiked along the trail my continual scanning paid off: down the slope, and right by the secondary trail that we’d turned away from I could see some small splashes of yellow. With the rallying cry, “Glacier lilies!” I set off in search of my perfect picture. Andrew joined me while the others just watched with amusement as we crawled about on our bellies to get the best angle on these diminutive flowers. 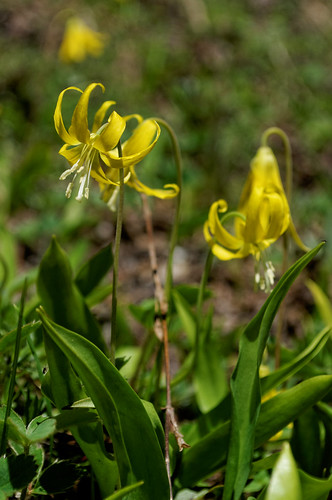 It was only a small patch of flowers, so we soon exhausted our photographic options, and we all met up to continue onwards in search of a good lunch spot. More flowers, including just a handful of chocolate lilies, and more views kept us company as we ate lunch. We hadn’t reached the cairn, and with Maria wanting to rest her achilles, she and Merewyn were happy to bask in the sunshine while the rest of us pushed on. Entering the trees again we soon hit snow. Following the trail was mostly straightforward, though we did reach a point where we were clearly well off-trail and had to find our way back.

About half-an-hour after leaving the others, we climbed the final gravelly hill to the cairn. I remembered coming this far the first time I hiked this trail back in 2005, and I was not disappointed by the views. The jagged profiles of Mt Slesse and the Border Peaks dominated the view, while the glaciers of Tomyhoi and Mt Baker gleamed in the sun. I distinctly remembered getting a view of Mt Cheam, and indeed a little bit further beyond the cairn there was a clearing with pretty good views of the entire Cheam Range.

Time to head back, and we retraced our route back along the ridge – keeping to the trail this time – meeting up again with Maria and Merewyn, and beginning our return journey to the car. Down, down and more down, pausing only to catch a few more flower photos, before we reached the parking lot. Another grand day out in the mountains!