We did this hike back in 2009 after our Mount Assiniboine trip and, given its superlative rating by the Copelands, we wanted to repeat it and use it as a kind of in-your-face introduction to hiking in the Rockies for Susanne, Brenda, Jeremy, and Gabriela. Our plan was to take a steady drive south along the Icefields Parkway, stopping off at the best viewpoints and generally taking in the immense scenery. Heading out on such a long drive today would give us a day’s rest before tackling the Skyline.

When we set off, I wouldn’t say the weather was bad, but it wasn’t the clear skies I was hoping for, nor forecast. Fortunately, by the time we reached the Icefields Centre, there were at least a few patches of blue around, peeking out from behind masses of white. After sneaking in our picnic lunch inside (which we justified on account of the chilly wind and our purchase of a couple of extremely over-priced hot chocolates), we headed to the Wilcox Creek campground and the trailhead for the hike. 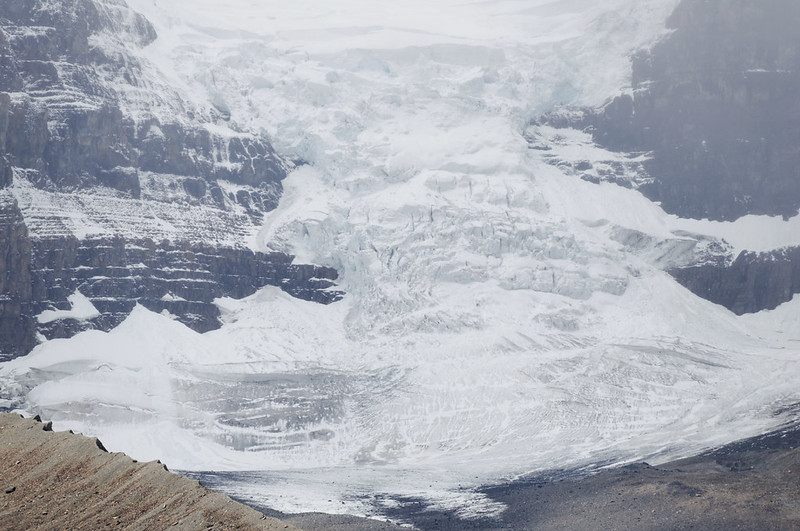 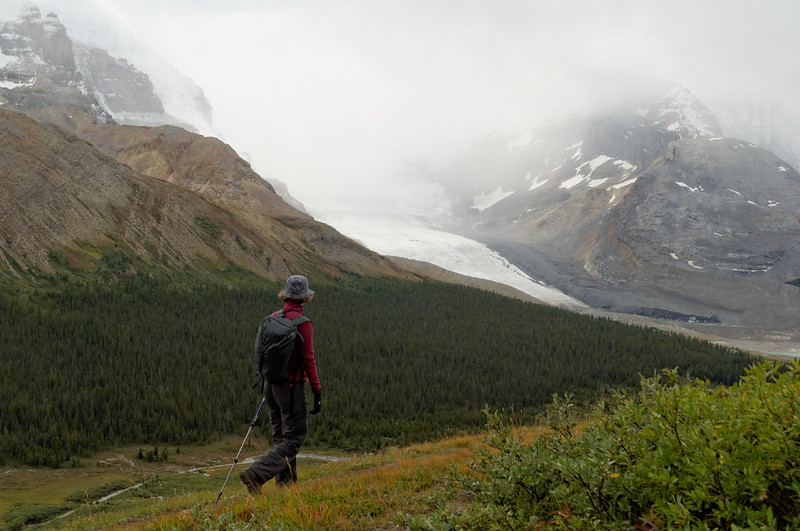 It was all coming back to me now. I was really looking forward to seeing the Athabasca glacier from up high again, and the clouds were even cooperating. The trail led us off through the forest, climbing steeply through a fungal wonderland. Fungi of all shapes and sizes were pushing up through the soil all around us. If my aim today was to take mushroom photos I could have spent hours just here. The flowers had all but died back, only a few wilting asters and arnica were holding on.

But today was about the views and we pushed on uphill, reaching our first viewpoint overlooking the glacier. We’d already climbed a couple of hundred metres so even after such a short time, we had a commanding view. Now we were above the treeline we could see the narrow spine of Mt Wilcox rising ahead of us and the flanks of Nigel Peak to our right. We followed the braided trail northwards, rising gently at first and then more steeply as we reached the edge of the gulley carved by the creek draining from the pass. I don’t remember who spotted it first, but we saw movement across the gulley and down the slope. Looking closer we saw it was a lone bighorn sheep ram. Okay, so it was only one – we’d seen a dozen on our last visit – and it wasn’t another bear to add to our glut of sightings from the weekend, but it was wildlife. We watched it stand up, turn round and sit down again.

Satisfied with our safari so far we continued on uphill, following the edge of the gulley and losing our view of the glacier below. Within a short time we had pretty much finished all our climbing as we entered the broad expanse of the pass itself. Wilcox Pass is a pass like no other I’ve ever seen. It is a huge, wide open space, perhaps a kilometre across, gently curving away over the hill and leading down to Tangle Falls. You couldn’t really say it is hemmed in by peaks, but Mt Wilcox rises steeply on the west side and looks like an intimidating scramble up its knife edge. On our right to the east lay the slopes leading up to a snow-dusted Nigel Peak. 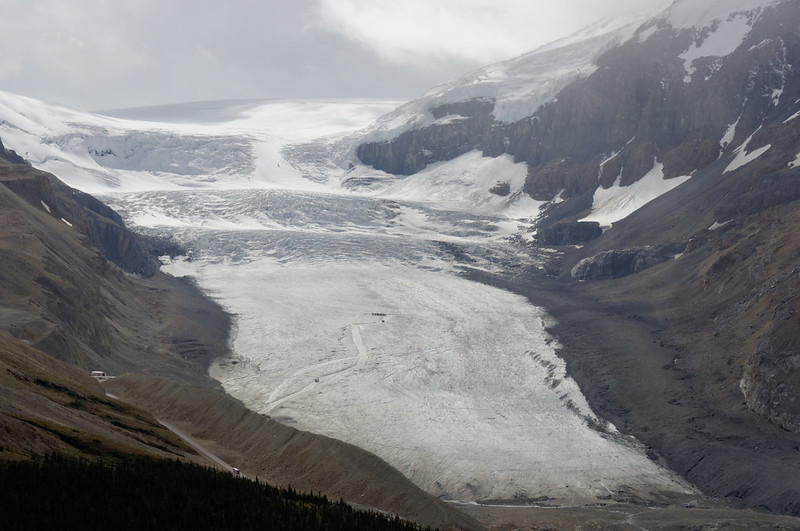 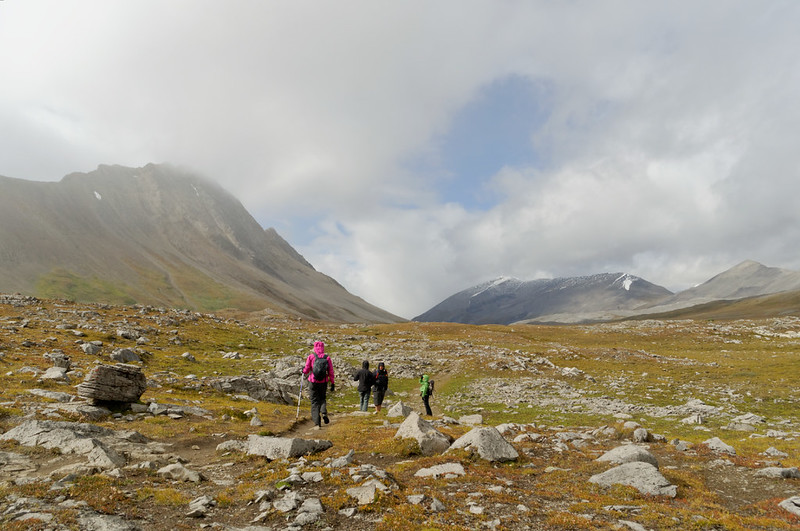 In some ways Wilcox Pass is a bit of an anticlimactic destination: you reach this broad open plain with no clear turnaround point, and not much in the way of views either. On our last visit, we had picked our way over several ridges to the west in order to regain the views of the Athabasca glacier and surroundings. This time we followed the Copelands’s other suggestion – head east and climb part-way up a ridge to obtain views over Nigel or Wilcox Lake (depending on whether you believe the map or the book).

But perhaps the weather had other ideas for us. We’d had spotty showers of light rain on our ascent, which now turned to driving pellets of ice and snow. We pulled up our hoods and donned gloves as Mt Wilcox disappeared in the squall. We continued anyway seeing as we weren’t getting wet, and within a few minutes the shower had passed and patches of blue sky returned.

The directions were vague and we couldn’t really identify the features mentioned in the book description, but our destination was obvious enough and we struck out across the marshy meadows towards the rocky ridge. I imagine in summer that these meadows are sopping wet – fortunately they were mostly dry as we picked our way through heather, fluffy dryas, and cotton grass. As we reached the rocks, another snow squall came and went. Undeterred, we followed a gently-rising ramp back to the south, gaining height gradually as we picked our way over the rocks. Within a few minutes we reached the scree slopes of Nigel Peak and a pair of obvious tracks. We turned left again and followed our new-found trail over loose scree, gaining more height before a little scrambly bit just before we reached the top of the ridge. More snow came and went. 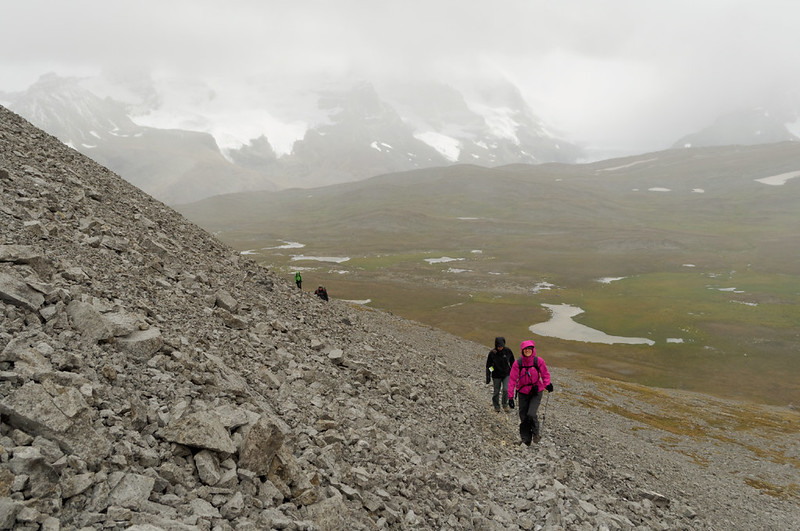 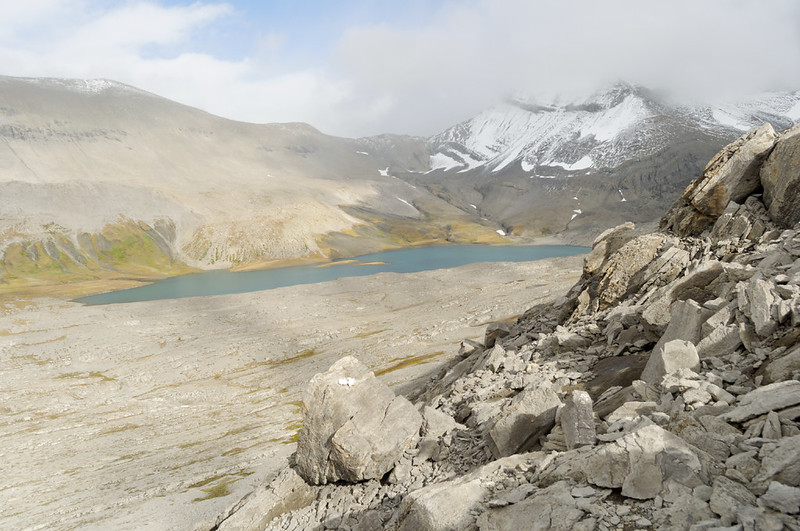 And I have to say it was totally worth the effort. We had a gorgeous view down towards the lake and up to Nigel Peak. Even better, looking behind us to the north we had a grand vista over the vast plain of Wilcox Pass. The curving, eroded rock formations reminded us of ripples in the sand at the beach. I think it’s safe to say we were all impressed: Rockies grandeur at its finest.

We stopped long enough for a snack and multiple photo calls (as well as waiting out another snow shower). Sadly we were running out of time and needed to get back down so we wouldn’t be driving back in the dark (at least that was the plan). We picked our way back along the scree and, this time, opted for a more direct return to the trail, albeit one that required careful negotiation of a steeper-than-it-looked talus slope with more than its fair share of loose boulders.

Soon we were back in the meadows and as we regained the trail, we weighed up the possibility of getting more glacier views. We turned off and began heading west. To our delight we spotted a group of bighorn sheep, perhaps eight or nine of them. However, our delight was tempered by a large ram that began walking in our direction, or at least parallel to us. Not wanting a chance encounter we stayed higher up the slope. Maria and Susanne soon came to a deep gorge that couldn’t be easily crossed without a detour, which we first thought was the end of our possibility of getting the views we were after. We turned south and lo and behold, one of the mini-ravines gave us an excellent view of the glacier and nearby peaks. Even better, the ram we’d spotted had sat down in a scenic spot, for all the world looking like lord of the manor surveying his kingdom. Which, to be fair, he probably was. 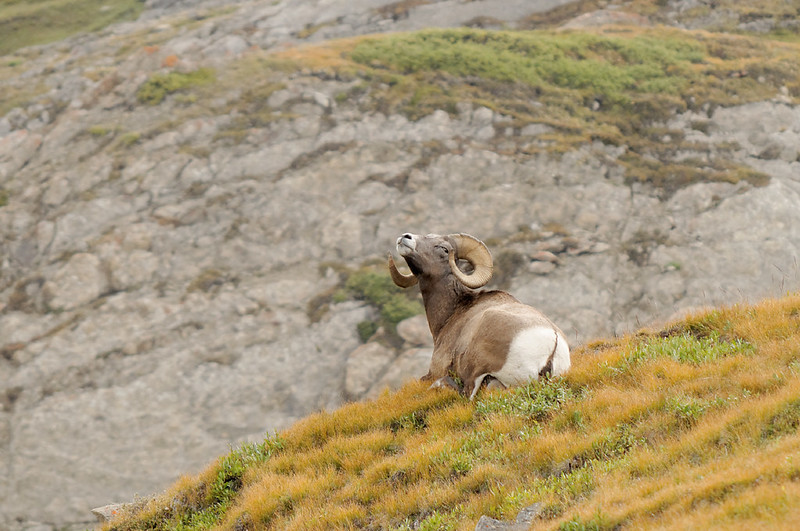 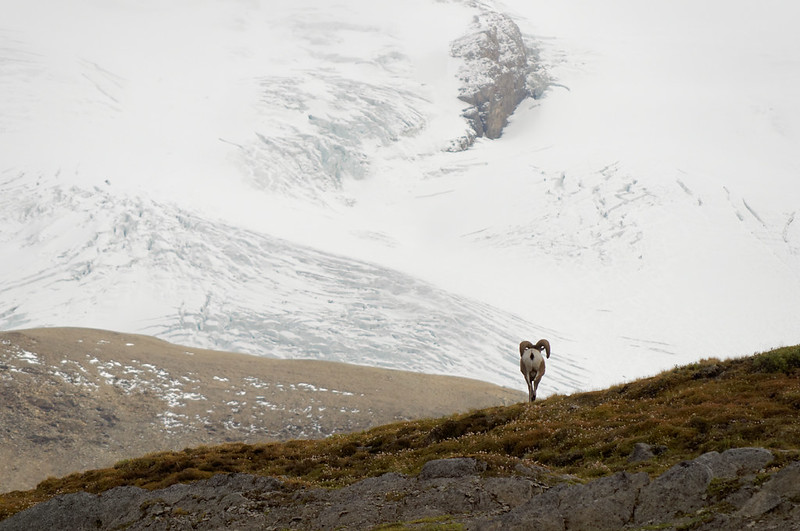 Sated with glacier and sheep views, we headed back to the trail, where we met the rest of the sheep. They were having none of it and moved away from us. I didn’t want to risk getting cut off by the gulley we saw on the ascent so we found a way across the creek, following a sheep track back up to the trail. Now all we had to do was descend – steeply (it didn’t feel that steep on the way up!). One last view and then a steady wander back down through the trees to the cars. We had barely found parking spots earlier – now there were only four cars at the trailhead.

Well, so much for not wanting to drive back in the dark – sunset was rapidly approaching and we still needed to eat. Our solution was to head in to the campground and make use of the one of the cooking shelters, sharing the warm space with a pair of cyclists who had just pedalled their way up the enormous hill to Sunwapta Pass, through the same showers we’d been hiking through. They were cold and wet and even more grateful for the stove heater.

Fed and watered (we had a little wine with us…) we got back on the road in the fading light for our hour-and-a-half drive back to the campground. The drive back was uneventful though my eyes were on stalks looking for animal eyes. At one point the car in front us tapped the brakes, and I instinctively slowed down expecting it to be nothing. And then we caught a fleeting 80-km/h glimpse of a large bull elk at the side of the highway – I hadn’t seen its eyes. Hmmm, time to watch out even more closely. Thankfully that was the last animal we saw until we got back to our tents. We unpacked and settled in for the night.