This gentle hike made quite an impression on me when I first did it back in 2011, and I’ve been waiting for the right time to do it again to show others its star attractions. My criteria were a sunny day in shoulder season – today was perfect. Despite a heavy downpour in the early hours of the morning, the day cleared up to reveal deep blue skies.

Andrew joined Maria and me and we enjoyed a leisurely drive up the Sea to Sky highway to Squamish, parking up just before 10:30 am. Since I wanted to leave the fire-tower viewpoint until last, I decided that we should hike the loop in the opposite direction to the way I’d first done it. We set off along the lake and crossed the bridge into the forest (called Hunter’s Crossing), complete with a dire warning about missing sections that amounted to a narrow half-metre long gap between two planks, outlined in bright orange spray paint. Scary… We turned left and joined the gently upward sloping trail through open, sunlit forest. Initially the forest was cedar and fir, but as we began tracing the flank of a slope, it opened out into an bright understory of salal and dry brown ferns. Mushroom season was well and truly on us with a huge range of fungi sprouting up all around us.

Following the route backwards was easy – I even remembered some of the junctions – until we reached one section with a stiff uphill climb. I remembered that climb, but my mental picture of the route after that broke down and I found myself doubting we were on the right track, even though we hadn’t passed any obvious trail junctions. We had seen some flagging earlier, and I wondered if that marked the turnoff, but I really didn’t remember anything other than obvious junctions on this trail. Hmmm…. well if nothing else, we turned the sighting of flagging tape into the joke du jour, and any time we spotted some (no matter where it was), we decided that was where the trail was supposed to lead. You had to be there, I guess…

As we wandered on, kicking our way through piles of fallen big-leaf maple leaves, we could make out that the terrain dropped away steeply ahead of us, and I heard the sound of a train. I ran onwards to see if we were close to one of the viewpoints and was relieved to find out that we were really close. We were on the right path all along, but in my mind’s eye I remembered much less pleasant forest. Looking back, I should have read my previous write-up as it mentions this stretch of pleasant forest! No matter. We turned out onto the bluffs and took in the interrupted view of the Tantalus Range across the valley. It was here that we really noticed how the wind had picked up, and we watched the ravens hang in the air overhead, croaking and calling from time to time. At its strongest, the gusts were bending the spindly trees right over and threatening to blow us away from our perch. 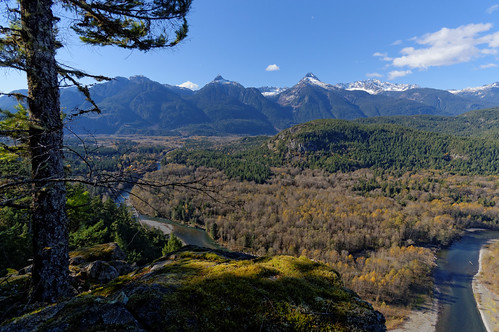 We moved on to the next – and best – viewpoint, a treed promontory with a sheer drop down to the railway line and the Cheakamus River below. The wind had been howling but mercifully let up for a few minutes as we stood or sat at the cliff edge. What a view! When I was here last, the mountains were shrouded in cloud, but today only a few small clouds scudded by over the summits. The last quarter moon hung in the sky over Alpha Mountain. Below us, the cottonwood trees lining the river clung on to the last of their leaves, a pale yellow landscape cut through by a wide meander of the river. We could see and hear sea gulls down by the water, undoubtedly feasting on dead salmon. I saw one bald eagle soaring high above us, but none near the river. I’m sure they were there, though. Next month, they’ll start to return in their numbers and hopefully we’ll get a good day to see them this year (our last attempt at bald eagle watching in Squamish turned up zero birds!).

We spent some time here enjoying the fantastic view. It was better than I remembered, and we were even able to venture a little further along the cliff to an even better spot. Wow! :-) It would have been easy to sit here for longer, legs dangling over the edge, and soaking up a little sunshine, but I had another viewpoint up my sleeve. Off we went, following a couple of steep switchbacks down, past a well-built picnic table that once had a fine view (before the trees grew up around it), eventually picking up the next leg of the trail.

By now the wind was back with a vengeance and at one point a nearby tree cracked, and looked to be ready to fall, but it righted itself as the wind abated. I can’t see it lasting another blast like that, though. Looking up, the waving trees was a mesmerizing sight. We climbed up through more nice open forest, passing hundreds more mushrooms and returning to the salal understory. I could see the bluffs above us were those we had to climb, and we soon came to the junction leading up towards the old observation tower.

Of course, we didn’t get that far: we reached the open bluffs with full-on views of the Tantalus Range and promptly decided that this would make a suitable (late) lunch spot. For the next forty minutes, we ate, chatted, looked at the view, went off in search of different views, explored the tower – just passing the time in the warm sun. Even the breeze was warm, and we were sheltered from the worst of it. A few other hikers came and went, stopping long enough to enjoy the scene.

And then it was that time again, time to move on and return to the car. We headed down and back into the trees, turning to descend steeply to the lake. The wind had blown down many small branches, including some covered in lichen – which gave Andrew an idea… Down by the lake, he set fire to some of the green, stringy old-man’s beard and we watched in amazement as it flared up brightly. He dropped the branch into the lake, which doused most of it but some kept burning. We watched it gradually fade to a few glowing embers, at which point he poked it under the surface to make sure it was all out. That well and truly answered a question we’d had for a while: if in need of tinder to start a fire, some lichen will work perfectly.

The excitement over, it was time to make haste, especially with the trees creaking in the wind. Leaves and needles had been raining down on us for most of the hike (it even sounded like rain), but having seen some branches come down we decided to get out as soon as we could. Still, it was further than we imagined and that last bit sandwiched between the lake (and howling wind) and the road (and howling traffic) was a bit tedious. So we treated ourselves to an afternoon pint at the Howe Sound Brewing Company. A tasty end to a nice little hike.

On our return home, I found myself saying again that this is a surprisingly nice little hike, and those viewpoints are more than enough to justify doing it again. Highly recommended, especially on a clear day.