Another bluebird day, another hike in red rock country. This hike starts in open desert-scrub terrain (where we were serenaded by coyotes) and heads to the very head of Boynton Canyon, passing into a ponderosa pine ecosystem. The canyon is oriented north-south at its mouth, and turns abruptly west after about 2.5 km. This part of the canyon sees much less sunshine than the rest, and indeed in December it was pretty chilly. We kept up a good pace to keep warm and hoped to find a sunny patch at the end of the canyon.

Alas, the sun proved elusive, though we followed a cairned route up onto and along a bench where we caught a whole two minutes of warm sunshine before it dipped below the canyon wall once more. To get on to that bench, turn right when you reach the end of the trail (marked be a sign discouraging further exploration up the slope), cross a couple of washes and up onto what looks like a narrow ledge, but is in fact perfectly easy and wide. The only tricky part is having to get round an enormous agave plant which is much spikier and stiffer than it looks. 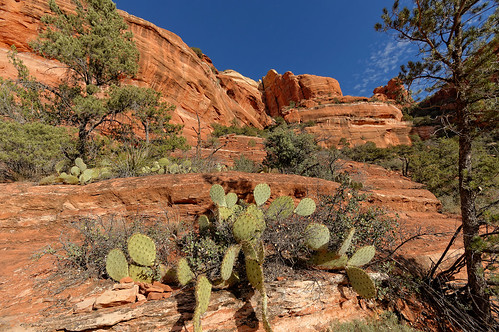 The hike is easy for anyone used to hiking in BC, as it has minimal elevation gain. For Sedona, it is classified as moderate. In December there was no water to be found anywhere along the canyon, which meant it was perfectly still and quiet with just a few birds for company. I imagine that it gets unbearably hot in summer. It may not look it but it’s still (black) bear country and there was recent evidence of something digging through old logs and raking up leaves.

The downside to this hike is the limited view at the end, especially in winter. If you’re not there in the middle of the day, it’ll be cold and dull. However, up on the bench you do get to admire the high canyon walls and see more of mother nature’s rock sculpture to the east. Another detractor is the large resort community that you walk past for much of the first half-hour of the hike. On the other hand, having to avoid the resort puts the trail a little higher up on the canyon wall so at least you have more interesting stuff to look at. The highlights are the surroundings especially on a fine day: red rock and blue sky make for stunning photos for sure. And be sure to take the little side trail up to the nearby “vortex” which gets up close to a stunning rock spire and has great views all around.