A stunning hike that combines two trails in the upper Sedona region, we hiked the loop anti-clockwise, heading up Mormon Canyon to Brins Mesa before joining the Soldier Pass trail, finally making the loop with the Jordan and Cibola Pass trails. This trail has many things to recommend it with easy hiking, great views and stunning scenery plus a couple of interesting geological features. Great photo opportunities aplenty. 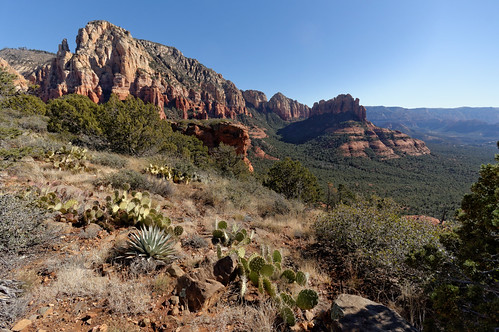 We were able to hike this trail from the front door of the house we were renting, so our distance is probably 2-3 km more than starting at the trailhead. Heading up Mormon Canyon, the trail gains elevation very gradually until the last few hundred metres before the mesa at which point it climbs to the high ground. Again, by BC standards it’s an easy climb. We followed the trail along the southern edge of the mesa through cactus gardens to reach a rocky outcrop with quite a drop on either side but with amazing views. A few well-placed plants and rocks make this an extremely photogenic spot.

Returning to the main trail, we passed through the old burned area (now wide open and grassy) before reaching the Soldier Pass turning to our left. Then we descended into the pass, though we didn’t see a trail sign telling us where we were, but we knew from the map and the direction we were heading that we had reached Soldier Pass. From here you drop elevation quite quickly and spend the next while hiking through open forest with occasional views of the surrounding red rocks, including the famous Coffee Pot rock (from behind).

The first feature we came to was the Seven Sacred Pools, seven (or more depending on how you count them) small-to-large pools carved into the slick bedrock. Even in December the pools were filled with water, though none was running between them so they were brown and stagnant. A short distance further is the giant sinkhole of the Devil’s Kitchen: an enormous hole in the ground, at least 20 metres deep with sheer cliff walls, some of which overhang. You do *not* want to fall in so be very careful around the edge as there is no fence! 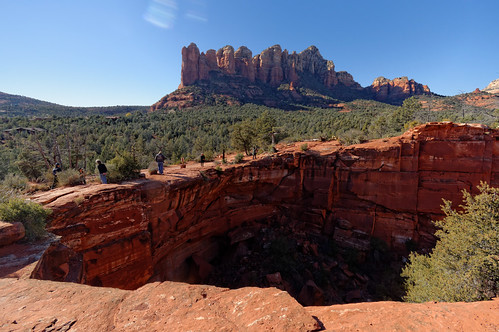 A great hike, definitely our favourite of the three we did in Sedona.