I went in search of glacier lilies and was not disappointed :-) However, I was even more impressed by the displays of white heather and pink kalmia which were the most extensive I’ve ever seen.

Our route followed that in 103 Hikes up to Outhouse Junction (where we were greeted by whisky jacks as usual). We then carried on and took the trail up towards Black Tusk for about 1.2 km where we found an unobstructed view of Mt Garibaldi and its namesake lake, as well as a nice little meadow of glacier lilies. This was our lunch spot. 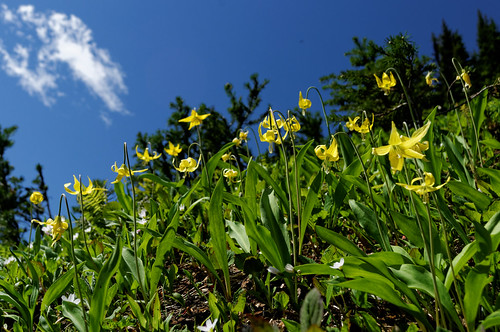 I’ve never seen the water level in the lake as low as it is right now. Rubble Creek is usually a raging torrent as it drains the lake, but there’s no water in sight at the moment. Lots of exposed logs and (dried) muck. We cooled off our feet in the lake before heading back. Lesser Garibaldi Lake looked like a California reservoir. The Barrier put on a good display of rockfall, with one gully in particular hosting all the action. 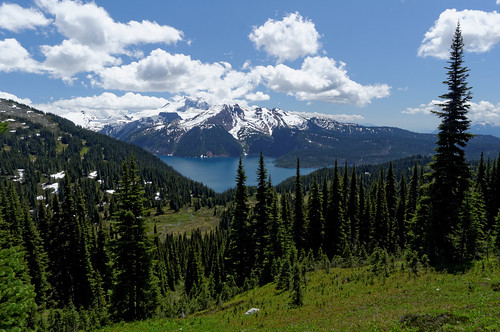 The trail is in excellent shape. BC Parks is continuing its work on upgrading the trail and in the process have taken out one of the switchbacks near the 3-km mark. I think that was a mistake as that section is quite a bit steeper than the rest, but it cuts off a little bit of distance. We stopped and chatted with one of the workers and he seemed to be thoroughly enjoying his job. No snow and very little mud. The campgrounds look to be snow-free. I didn’t venture into the one at the lake but did see a number of tents, so camping is certainly possible.

Bugs were mostly OK, but were definitely hungry at Taylor Meadows. The chipmunks at the Barrier didn’t seem as bold as usual and only appeared after we tore into our granola bars. Maybe it was that sound or the smell of the food? Who knows. They were as cute as ever, and soon left us alone when they realized nothing was being offered. 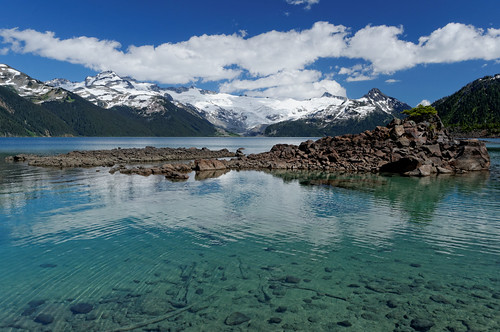 Flowers: plenty :-) Queen’s Cup and bunchberry in the forest, several wintergreen species (pink, one-sided and a couple more I don’t know), rattlesnake plantain is just sprouting, a few late coralroot. At the treeline, lots of white heather, pink/red heather is just beginning its bloom. The most kalmia I’ve ever seen :-) alpine white marsh marigolds were common in wet areas, a few globeflower and western anemone (fewer than I expected), cinquefoil and subalpine buttercups were plentiful. The glacier lilies are sparse but locally abundant, especially in areas where the snow has recently melted or in seeps and near creeks. The peak bloom is probably past, but there are still plenty to go and admire :-) Sitka valerian is just starting, as are a few lupines. No paintbrush to be seen anywhere, only one or two arnica.