Another nice little jaunt around the various Hollyburn trails, taking in a handful of ponds and lakes. As with last year, highly recommended for a gentle leg stretcher. No views for the most part, except for one point with a superb view over to Mt Baker and the new Port Mann bridge, and the lakes are not exactly beautiful. Don’t let that put you off: it’s a very pleasant amble along old roads that are used as cross-country ski runs in the winter with a few forest sections for good measure. Again I was surprised by the number of cabins up there. 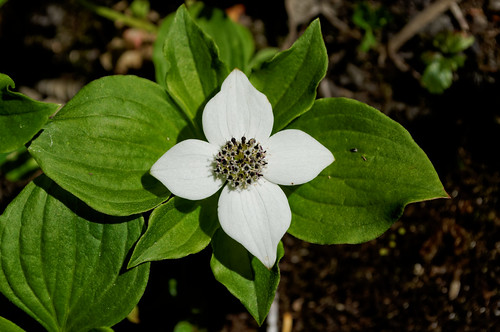 Flowers are plentiful right now, seems to be the turn of the white ones to bloom :-) Queen’s Cup, bunchberry, northern starflower, creeping raspberry and deer cabbage. A few yellow violets and pond lilies at Blue Gentian Lake (where the gentian flowers are growing but nowhere near blooming yet). I found a few ripe salmonberries, where I was buzzed by a hummingbird and scolded by a Steller’s jay :-) I also spent a few minutes watching a red-headed sapsucker tapping away at a tree before it flew to a nearby snag to feed its squawking brood. 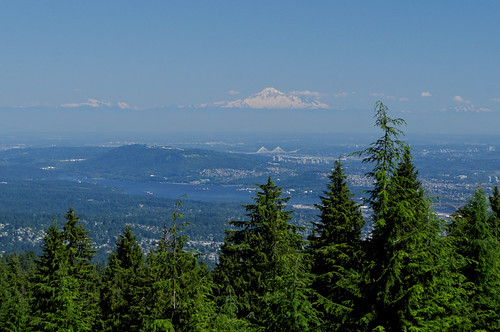 A few bugs – enough to be annoying but not bad overall. However, there may be a wasp/hornet nest at the picnic table by Blue Gentian Lake. There were a few buzzing around a hole in the ground, and the nearby copperbush bushes had several feeding at the flowers. Unfortunately I didn’t have any paper to leave a note.