My enthusiasm for glacier lilies managed to persuade Maria, Andrew, Gabriela and Jeremy to join me once again to go admire those little yellow flowers that I find so cheery. The five of us piled into Jeremy & Gabriela’s car and headed up the Sea-to-Sky highway to the trailhead for Garibaldi Lake, where we bagged the final spot in the upper parking lot. Yup – already full, and with a large group getting ready to move off, we pulled on our boots and set off as quickly as we could.

I was looking forward to revisiting the hike to show others what I had seen a few days earlier, and to see if more flowers were blooming. We chatted our way up through the forest, passing all the Queen’s Cup and a few Columbia lilies in bud. Once again we took the route up to Taylor Meadows and enjoyed the sights and scents of the subalpine. The pink and white heather covered the meadows, and I think at least Maria & Andrew were actually impressed at the extensive kalmia blooms.

About half-way between Taylor Meadows and Outhouse Junction, my eyes spotted something dark about 100 m off the trail in an open clearing. I stopped to check – I didn’t have my glasses on so my vision wasn’t as sharp as it should have been – and sure enough it was a lone black bear, head down browsing the meadows. We switched lenses and I dashed off a few photos. A group of a dozen or so hikers caught up with us and we pointed out the bear to them – at which point I wished we’d hadn’t as a few excitedly tramped off the trail to get all of 10 feet closer to get that better photo… D’oh! Ah well, at least it was a nice safe bear sighting so even the more panic-struck members of that group weren’t totally freaked out. We left them behind and headed on to meet with the whisky jacks at Outhouse Junction. 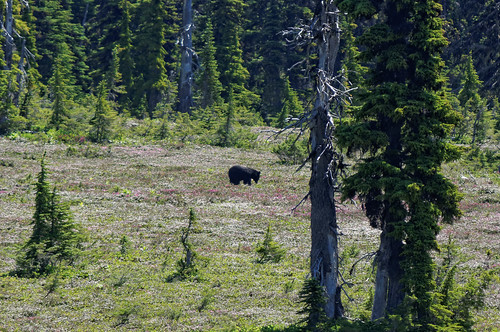 Beyond there we reached the first meadow where I’d previously seen glacier lilies and kept my eyes peeled for them, and particularly for the double-headed flower I’d photographed. Well, I saw none. They had either been picked, eaten (after all, there was a bear in the area) or had simply finished their bloom. So I’d have to wait to show off my first lilies of the day. A few minutes beyond we reached the turn up towards Black Tusk where I’d headed with Jackie and Aaron last Wednesday. There’s a nice clump of trees that offers a bit of shade and some shelter, and makes for an excellent lunch spot. We sat ourselves down, dug out our snacks and relaxed for an hour.

Under way again, we took the lower route towards Helm Pass and Panorama Ridge. It was a hot sunny day, and I thought I’d brought enough water but soon after leaving our lunch spot, I realized was in danger of running dry. I ignored it for now as we encountered our first glacier lily meadows and I darted off to take more photos. Further along the trail we passed a couple of creeks and near each the main bloom was just beginning with signs of pink monkeyflower, valerian, lupine and the first red paintbrush (of which I’d seen none just the other day). In some of the pocket meadows, the glacier lilies had already gone beyond blooming and were nothing but a seed pod waving in the breeze.

We reached a suitable turnaround point having seen enough glacier lilies to prove they exist :-) I took advantage of the fact Gabriela was carrying water treatment and I filled my Platypus from one of the deliciously cold creeks. Replenished, we headed back to Outhouse Junction and took the direction down towards Garibaldi Lake for a look at its turquoise waters. As we crossed the still-dry outlet stream (to everyone’s amazement) I noticed that something had changed since Wednesday. Where the bed of logs was totally dry before, there was now the smallest of shallow puddles as meltwater gradually began to fill the lake. I was sure it would soon be back to normal with a rushing Rubble Creek pouring underneath the bridge.

We walked around the lake shore to find a quiet(-ish) spot admire the view. Andrew and Jeremy took the plunge and swam in the freezing water while the rest of us were content to simply cool our feet. Having walked this far, we felt like we could have stayed here for the rest of the day – it was warm, sunny and calm. Remarkably there were very few bugs to annoy us – we’d only encountered a handful up in Taylor Meadows.

As ever it came to that time again to return to the car, and we got ourselves under way, pausing at the Barrier where we were transfixed by the rockfall. We watched for quite some time as clouds of dust billowed up a pair of active gullies. At times we could even see the individual rocks hitting the fan of scree at the base of the cliff, landing with a smack. It was quite mesmerizing.

We eventually dragged ourselves away and counted down the kilometre markers and switchbacks to reach the car. We finished off the day with food and refreshments at the Shady Tree – not our favourite place, but it was OK this time.

Another grand day out in nature – sometimes it’s almost too beautiful to believe, and you have to pinch yourself to make sure it’s real…