Grouse Mountain has it all wrong: the real Peak of Vancouver is undoubtedly Crown Mountain. It’s been a long time coming but it was worth the wait: Crown is a spectacular hike/scramble with incredible views all around. It even has a stunning view of my favourite North Shore peak, Goat Mountain.

Maria, Brenda and I caught an early tram up to Grouse Mountain and set off onto the trail. Beyond the main area, we left all the noise and tourist bustle behind and found ourselves hiking up through near-silent forest, with only occasional bird calls and squirrel chatter. At one point I heard a dark-eyed junco calling along with the urgent cheeping of a youngster. Then the small bird burst out of the heather in front of me, flew around me and back into the heather to tend to its young. As with so many of our recent hikes, the pink and white heather were in peak bloom. A few arnica and partridgefoot rounded out the list of flowers. And the berry bushes look to be coming along nicely too!

After what felt like only a short time, we came to the Crown-Goat col where we met a couple of hikers with whom we exchanged a few words about the upcoming challenge. We topped up our energy levels with a snack and began our steep descent into Crown Pass. I knew it was going to be steep; I didn’t expect it to be so muddy and slippery; the roots and chains were very welcome. It was much easier going back up the way and I didn’t need to touch the chains once.

Then came the real ascent – and it was steep, but great fun. Despite their reputation, I had no issues traversing the downsloping slabs though I could see that they might be tricky when wet. After a while we topped out on the west shoulder of Crown with a superb view of the Howe Sound peaks and one of Crown’s sub-peaks, known locally as Beauty Peak. A trail led off in its direction which gave us ideas for another day… As we tore ourselves away from the view, we crossed a hot boulder field before the final ascent towards the summit.

The route up to the summit was obvious and lined up with Matt Gunn’s description very well. It’s funny to think that when he wrote that book, the full price of admission to Grouse was (a whopping) $23 whereas now that is the half-price admission fee! Yikes! When the trail first brought us onto a shoulder with a steep drop into Hanes Valley, my stomach flipped. The view was wonderful and in reality the drop wasn’t as bad as it first felt as the ground was level and grippy, so I relaxed and let myself just enjoy the experience.

My solution to dealing with exposure is to wait a few minutes and get used to it and then it doesn’t seem so bad. At the summit, when I came to a rock to go round with a long drop-off to the right, my initial reaction was to stop and say “no way”. But I wandered round, took in the view for a bit, and then went back to eyeball the route around that rock. By then I was more comfortable with where I was and had no trouble meeting back up with Maria and Brenda at their nicely flat lunch spot.

After lunch we explored the summit area. The summit ridge was occupied so I couldn’t test my new-found nerve by getting up there, but we did the next best thing by trying out a lower ridge. Sure, there was considerable exposure at least in one direction, but by moving slowly and making sure I was balanced at each step I found it quite easy to make my way onto that edge and sit (even stand!) for a while to take some more photos. 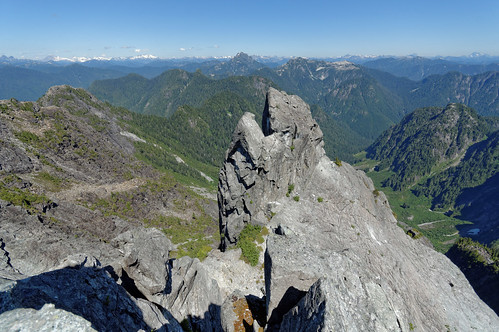 We must have spent an hour and a half lazing on the summit, and enjoyed every minute of it. We took many photos trying to make the view look as impressive and intimidating as possible. I think some of them even succeeded. As we descended I found myself enjoying the scrambling even more having built up a bit of confidence on the rock. Maria and I took the alternative route around the so-called bull’s-eye rock which I thought was i) longer, ii) still required one or two careful steps and iii) not really any safer than descending off the bull’s eye step.

Then it was all down, down and more down, through the heather and bee-filled copperbush. That descent seemed to take a while but we eventually reached Crown Pass and began the stiff climb back up. The official stats on this hike never take into account the descent into and re-ascent from the pass, but looking at the GPS track it was clear that we climbed nearly 900 m in total. It was interesting to see that Crown Pass is almost at the same elevation as the Grouse chalet – the descent into Crown Pass wipes out all of the climb from the chalet, but over a much shorter distance.

Soon we re-emerged among the crowds and made a beeline for a welcome cold drink. While I really fancied a beer, it was more convenient to get an iced coffee instead which I downed in no time. I had the beer at home instead :-)