Another one of those days where it was cold, dull and grey in Vancouver but venturing into the North Shore mountains lifted you above the cloud layer and into bright sunshine. It’s the middle of winter and still the mountains don’t have a lot of snow. What snow there is has been compacted and hardened by rain and frost. 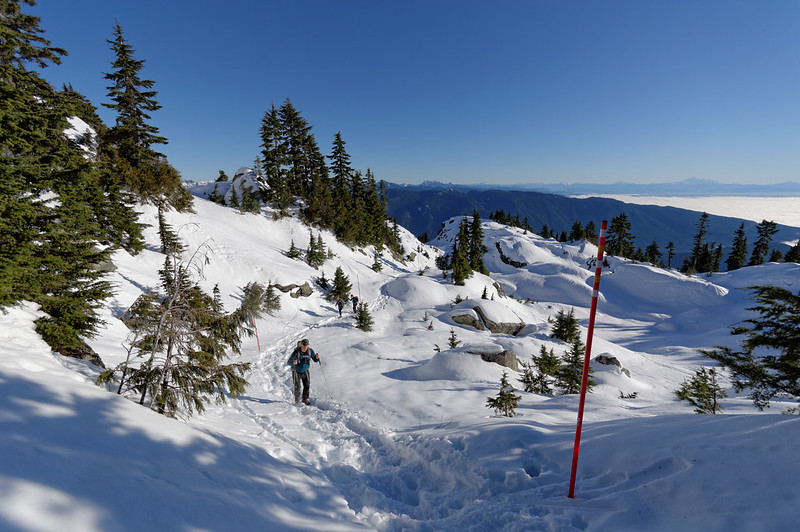 And so on this day, Steve and I headed up to the first peak of Mt Seymour, in our t-shirts for much of the way. We left our snowshoes behind and, after dodging the “doggy-do minefield” of the first hundred metres, we settled into a steady wander along a familiar trail. It’s almost ten years to the day since I first put on a pair of snowshoes, coincidentally on Mt Seymour on a hike organized by none other than today’s hiking companion. :-) I mentioned that to Steve and he gave me a blank look – he had no memory of that trip. Well, I remember it well, simply because it was Maria’s and my first time on snowshoes and I the memory of how much my legs ached as a result of walking through snow has never left my muscles…

As we neared our destination for the day, First Peak, the snow firmed up and became a little icier. Perhaps I should have pulled on my Yak Trax, but I was being lazy. We went around the north side of the peak and worked our way up the snow-covered ramps to the summit itself. Someone with a sense of humour (or Christmas spirit) had decorated the summit post with a Santa-hat. We found a lunch spot and sat down to admire the view of the cloud deck covering the city, and the distant peaks beyond. 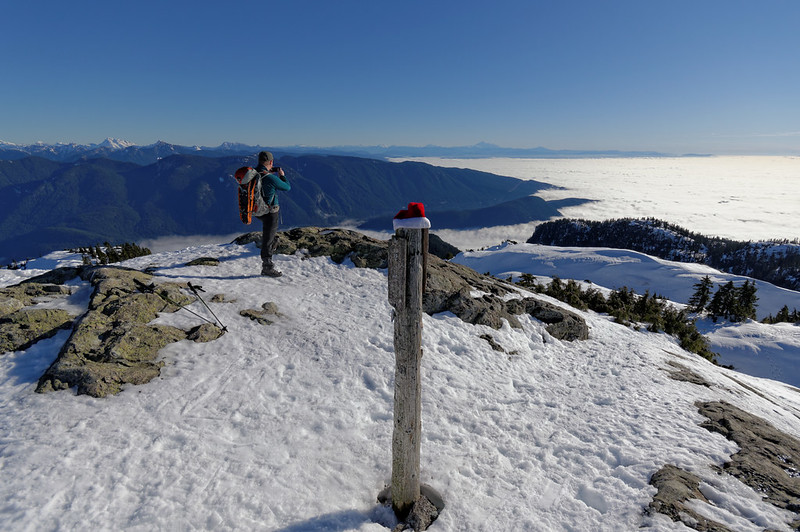 There’s always a cold breeze on Mt Seymour, and even though it wasn’t too bad today it still prompted us to get moving again once we had finished eating. And just in time, too as another group of hikers arrived to occupy the summit, quite oblivious to our presence. This time I did put on my Yak Trax as I didn’t feel like earning some bruises on the descent. Down we went, enjoying the view as we did, getting back to the car at a very civilized time of day.

What can I say? Another grand and peaceful day out in the mountains.