Today’s hike celebrated ten years since I first hiked the Chief, almost to the day. The weather conditions almost matched those of a decade ago, albeit slightly cloudier with the summits of the Sky Pilot group and Garibaldi shrouded in cloud all day. I called out this hike through Wanderung and was joined by Eddie on his inaugural Wanderung trip.

The trail is dry and snow- and ice-free and was an absolute pleasure to hike today. It was also delightfully quiet, as we met only a small number of hikers. I bet that’s not true on a weekend though. As we reached Second Peak, a lone hiker was practicing yoga on First Peak and had the space to themselves. It wasn’t long before their peace and quiet was disturbed by a dozen or so hikers and dogs. I’m glad we headed for Second Peak. 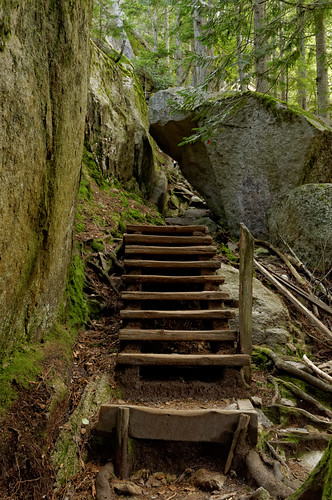 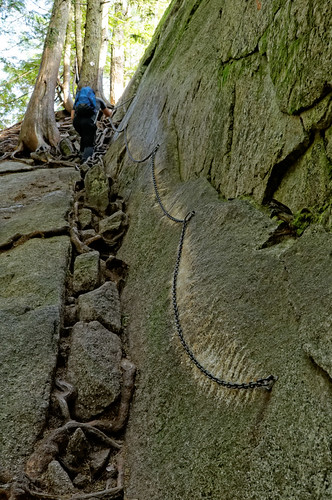 Measured from the parking lot nearest the trailhead, the distance is much less than the value quoted here at only about 6.5 km, but the elevation gain is more at 675 m. Given the stats quoted I budgeted at least 5 hours to complete the circuit, but we were done in 4.5 hours, including a leisurely lunch break.

So what’s changed in a decade? The trail used to begin by scrambling up and over the huge boulder at the base of the stairs; the current trail goes around this boulder, but you can recreate the hike of yore by climbing it :-) I remember being daunted by having to do just that all those years ago. The trail has also been re-routed in places, though I found part of the old route that squeezes underneath another large boulder. Of course the Sea-to-Sky gondola has been realized, and had just been proposed in its original Chief-topping form about the time we first hiked it. The Woodfibre Mill has closed and dismantled, which has reduced the unsightly haze across Howe Sound. Another obvious change is the sheer number of people attempting this hike now. I don’t remember seeing many people on that Saturday in March 2005, maybe about as many as we saw today. 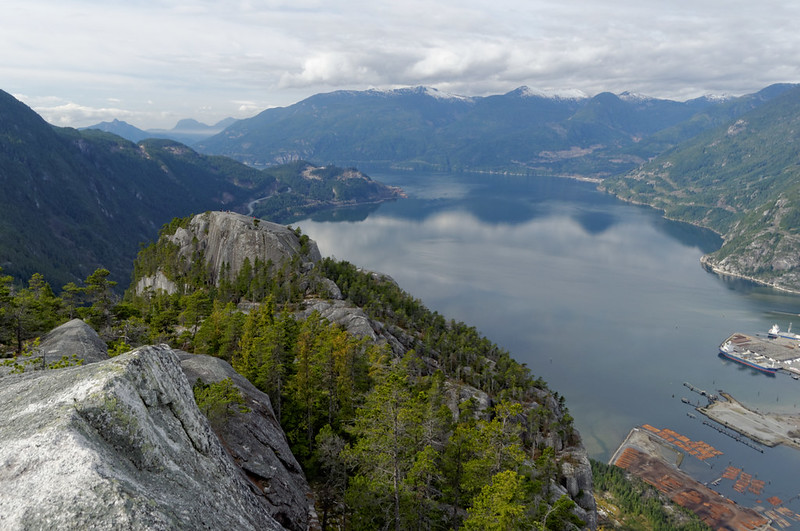 What hasn’t changed is that the trail is steep (!), the chains and ladders are fun, the grouse are sounding their booming calls and the descent between Second and Third peaks is a mess of roots and rocks.

Salmonberry is out in full bloom but not much else. Watch out for the chipmunks – their begging and scrounging skills are second to none. If you want to see a chipmunk dance, just hold your pinched fingers a few inches above its head…