Exactly as I remembered, the section from Lynn Headwaters to Mosquito Creek is pleasant (especially for a North Shore hike) while the rest of the way to Grouse is dismal, dingy, and a rock-and-root mess of a trail. However, given our lack of fitness right now it was easier to continue on to Grouse and take the two-stage bus journey back to Lynn Headwaters. With a cheery understory of hemlocks and some welcome sunshine, it felt like a glorious afternoon in the forest.

It’s been a dry week and it shows: the trail had nary a patch of mud (or even water) and was about as pleasant as North Shore trails can get. Many thanks to the North Shore Mountain Bike Association for their efforts in making in a truly multi-use trail. West of Mosquito Creek the trail deteriorates into a tangle of roots and braided tracks that make it easy to wander off trail. This section is well marked in the trees, but could do with some serious work when it comes to the trail on the ground.

A few early salmonberry flowers were out just west of Mosquito Creek (near the top of Skyline Drive) and a couple of yellow skunk cabbage swamp lanterns were showing near the surface spring in Lynn Headwaters. We heard some chickadees and possibly kinglets in the trees, a solitary raven croaking away, and caught a single note from a varied thrush.

The Grouse Grind is still closed and its entry gated but as ever it’s still possible to skirt the fence. I hope that some bureaucrat doesn’t decide to fence it all in and make it impossible to do any of the lower Grouse trails in the winter. That would show a complete lack of appreciation for hiking.

Crossing both forks of Mackay Creek posed no problems despite the lack of any kind of bridge over each. The east fork is a bit choked with tree debris, but is otherwise passable.

We caught the 236 back to Lonsdale Quay (where we picked up a welcome hot drink) before taking the 228 up to Lynn Valley. We walked the final km or so back to the car along the road, which was (thankfully) quiet, being near the end of the day. The rain which had threatened us near Grouse finally let loose as we drove away.

Our plan was to hike the trail as far as Mosquito Creek and back, as I had done last year. Wait, no scratch that – our original plan was to hike around Buntzen Lake but neither of us fancied the tedious drive out to Port Moody, and so we opted for the Baden-Powell trail instead. With a leisurely start, we ended up eating lunch in the car before we set off (while listening to an interesting story on Quirks and Quarks). 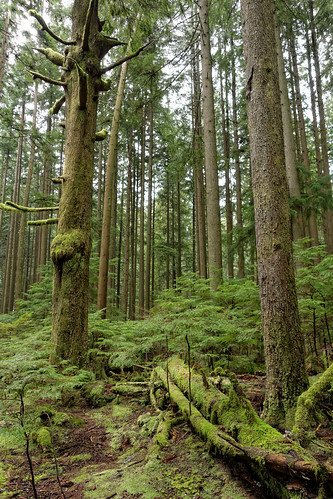 First up was the grunt up the steps out of the valley, which we accomplished with less huffing and puffing than I expected. We soon settled into a bit of a rhythm and enjoyed the forest hiking. After a while we crossed Mountain Highway and wound our way up another steep incline (which a mountain biker decided to go down as we topped out). Mountain bikers were a bit of a feature for the next half hour or so, as we encountered a dozen or so. Since we were still climbing and they were descending, we opted to step aside and let them pass, which they all seemed to appreciate. I’m still not convinced mountain bikers have it in them to yield to foot traffic as they are supposed to, but today I didn’t feel like fighting that battle and it was just easier to let them go through. I felt vindicated by their thank-yous.

Given the lack of hiking over the past few months, I was wondering how we’d fare when the time came to put in the effort of hiking uphill again. It seems that, yes, it required a bit of effort on our part but by and large we sailed through the inexorable gain in elevation over the first few kilometres of the hike. That was encouraging. However, despite our good progress I was wondering how I was going to feel trudging back with tired legs over the same sections of trail we’d recently hiked up. And so it was that we found ourselves tiring much sooner than we would normally and by the time we reached Mosquito Creek our minds were made up: it was a shorter distance to Grouse than it was back the way we had just come.

I didn’t even feel the urge to walk up to the old dam on Mosquito Creek – I was happy just to cross the bridge and keep going, pushing through the next steep climb away from the creek up towards the old Skyline trail. (Yet another Skyline trail, to go with the one in Jasper National Park, the one in Manning Park, and the Skyline Divide in the Mt Baker region.) As we re-entered the trees the trail more or less disappeared into a tangle of roots and rocks. The pleasant understory of a few minutes ago had gone, and we were embarking on the section I was dreading. Fortunately, the sunshine stayed with us for a while which helped motivate us. 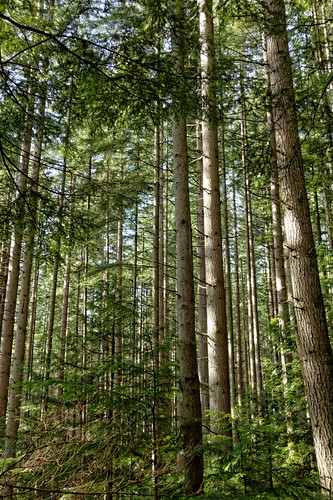 Really, the trail here is simply barely worth hiking and there’s little evidence to suggest it’s seen any kind of maintenance (and certainly nothing of the scale of the improvements behind us, east of Mosquito Creek). It’s a mess: braided, rooty, and rocky and all the while in the darkest, dingiest second-growth forest you can imagine. Our focus was simply of getting through it, crossing the forks of Mackay Creek at the bottom of their deep gulleys and emerging from the forest at the Grouse Mountain parking lot. The best that can be said about it is that it’s well marked with orange trail markers on the trees. Lose those, and you’ve lost the trail, and you’re now lost. I have a little more sympathy now for the people that require assistance from North Shore Rescue on this part of the trail.

At last, after dodging a few raindrops, we made our way steeply down the bank to reach the end of the fence, and hopped the concrete barrier into the parking lot. After making use of the facilities, we got on the bus and the doors closed behind us. We sat down in warmth and comfort and watched the world go by as we headed towards Lonsdale Quay. We had about 20 minutes to wait before our connecting bus, which was just enough time to pick up a welcome hot drink. Then another comfy bus ride back up to Lynn Headwaters, and the final walk along the road in the deepening gloom at the end of the day.

It wasn’t the trip we’d planned, but it was a trip worth making and, after a winter of inactivity, it felt like a nice little achievement. Plus, it’s whetted our appetite for more.