A pleasant way to spend a couple of hours on a winter’s afternoon. After a break of over 2 months from hiking of any kind, this was the perfect way to top up on a little bit of nature. Highlights were being back among the green, mossy forest, a few rays of sunshine, the roaring Seymour River, and the fact the trail was quiet, despite the number of cars in the parking lot.

We parked in the main lot by the filtration plant. We made a loop from the Twin Bridges Trail, Fisherman’s Trail, the connector up to the Circuit 8 bike loop and then over to Rice Lake. The trail was in good condition and boots were not necessary with only a couple of muddy spots to pick our way over. Some running water on the trail but not much.

There’s some construction going on in the parking lot which has half of one section closed off. It doesn’t take out too many spaces though. The gate closes at 5 pm at the moment. 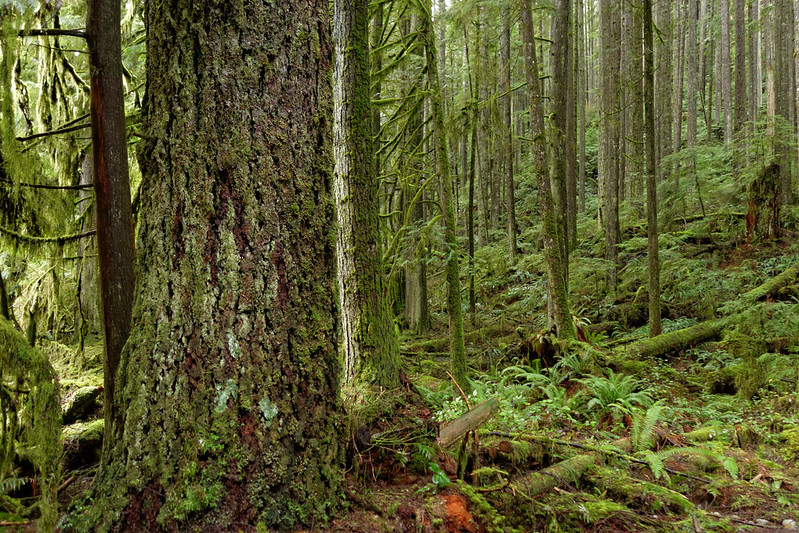 We’re nearing the end of January and only now do we get out on our first “hike” of the year? It’s been over two months since I last hiked, and three for Maria (Wedgemount Lake back in October). The swarm of people heading to the North Shore every weekend has put us off snowshoeing, so we’ve been content to pootle around in the city, walking along the beach or in Stanley Park. But with a few hours of good weather in the forecast, we decided that the time was right to venture further afield and do something closer to a hike.

We’ve done this loop a couple of times before and it’s an easy way to get a couple of hours of forest time. We parked in the main lot and set off down the path towards the river. The bridge over the Seymour River (formerly one of the Twin Bridges from which the trail takes its name) has been removed after the rockslide last winter dammed the river further downstream. The water level was quite high, though not at the old bridge level. According to the information sign, the district is considering plans for a new footbridge over the river – that’ll be good, and will allow a couple of more loop options again. 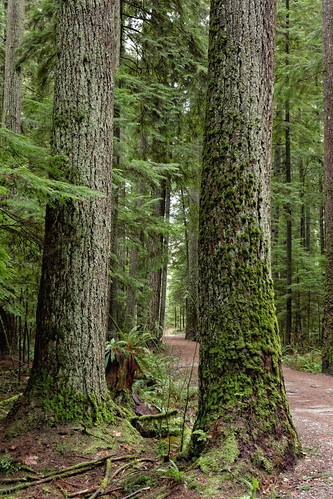 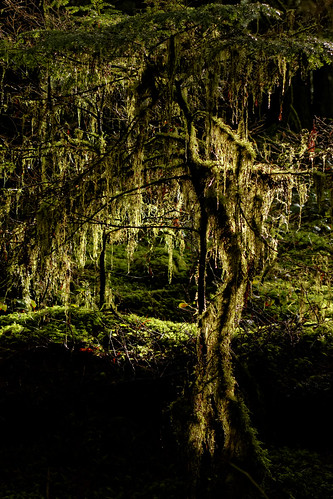 We followed the trail upstream and noticed the steps and boardwalk that led down to a sandy flat have also been removed. I guess the flood danger here is now too high. We ambled on up the trail and took the detour to the picnic benches at the bend in the river. As we approached the end, the forest lightened and a few rays of sunshine cut through the moss and trees, dazzling us with bright, saturated (literally) greens. We stopped and basked a moment. At the bend, the river was higher than on my last visit and the rocky beach I’d walked out onto was covered by rushing water. I still think this would be a nice place for a lunch break on a summer’s day.

We paused to admire the scene, including a couple of balanced rock pillars, before rejoining the trail and continuing on our way. It was green and peaceful, with just the sound of the river and the calls of a handful of LBBs among the trees. I’m always on the lookout for dippers here, as we saw one the first time we walked this loop. Alas, we saw none today. At the junction with the Homestead Trail, we opted to continue on upstream along the Fisherman’s Trail, which we hadn’t explored before. Well there wasn’t much to explore really, it’s just a trail that winds uphill a bit but is otherwise a straight, level path.

After a while, we reached the junction with the connector trail that led up to Rice Lake. Here the forest was a dense patch of well-recovered second-growth and made for the perfect surroundings as we huffed and puffed our way up the hill. We joined the mountain-bike loop as the ground levelled off, where we had to check the map to make sure we went the right way – it’s a figure-of-eight loop so we wouldn’t have got lost, but there’s no point walking more mountain-bike trail than you have to. Within a few minutes we crossed the access road to the Seymour dam and picked up the trail around Rice Lake.

Left or right? We picked right and took the anti-clockwise path and were soon back at the car, almost exactly 2 hours after we’d set off, feeling gently exercised and thoroughly refreshed.