Despite spending much of its time in unappealing second-growth forest, this circuit was actually remarkably pleasant on a warm sunny afternoon. Spring flowers, running into the gigantic Hollyburn Fir, some gorgeous light, and a very quiet trail made for an enjoyable few hours of hiking.

We parked at the city overlook at the first switchback on the Cypress Bowl road, and made a loop from the Millstream, Brewis, and Forks Trails, heading counter-clockwise. The Millstream Trail is officially closed where it crosses the west branch of McDonald Creek due to a landslip – it’s passable with care, but I wouldn’t like to try it in the wet. The bridge across Marr Creek is badly damaged but still OK to cross.

I recommend carrying a map – there are multiple trail junctions, and there are places where the trail is not always obvious. The excellent free map published by Friends of Cypress Provincial Park has everything you need. There are also several mountain bike trails that are not shown on most maps – be on the lookout for downhill bikers.

Spring flowers are blooming: plenty of bunchberry and starflower, Queen’s Cup is showing buds deeper into the forest. Along the Hollyburn cabin access road we saw yellow and purple violets as well as some palmate coltsfoot. A patch of western columbine was in full bloom near the parking lot.

The Hollyburn Fir is located near the intersection of the Brewis and Crossover trails and is stunningly huge. It was even more of a surprise given that we weren’t expecting it! 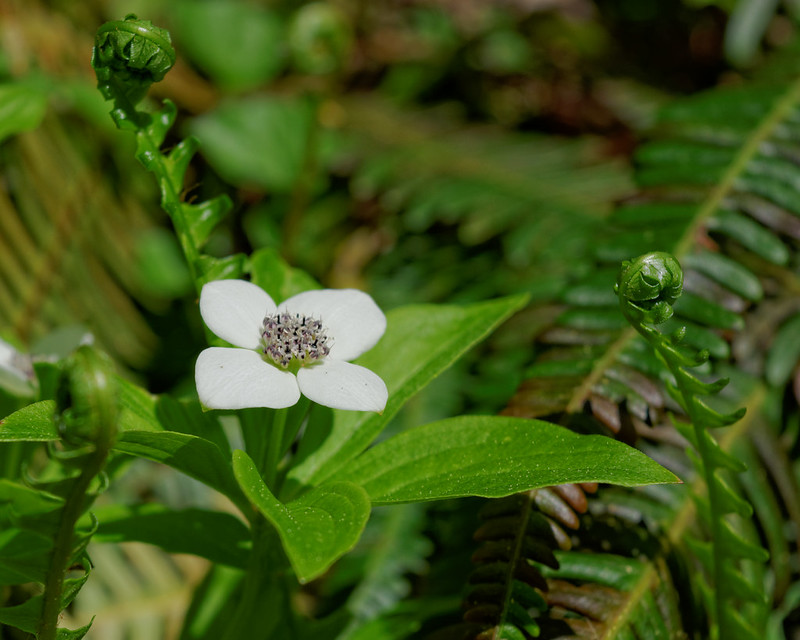 What to do on a sunny Sunday in May… Maria was dancing so Andrew joined me on this one. Our original plan was to hike to Whyte Lake, but that parking lot was overflowing. Plan B was a gently ramble in Lighthouse Park followed by returning to Whyte Lake once the crowds had gone – except that Lighthouse Park was *also* overflowing… Plan C saw us making up a circuit from some of the trails on the lower flank of Hollyburn that we hadn’t explored before. After a bit of faffing around we made our way up the Cypress Bowl Road and parked up at the city overlook.

We checked the map and outlined the circuit above as an option, with the possibility of extending it further up the hill if we felt so inclined (no pun intended there…). We picked our way along the edge of the concrete barriers and into the forest where we were faced with 3 options. A quick re-check of the map and we picked our route – only to be confronted by an intimidating sign about the closure of the Millstream Trail at west McDonald Creek. Since it was only 50 m or so down the trail, we thought we’d check it out and see for ourselves.

Well I can see why they say it’s closed: the bridge is very badly damaged, the handrail is loose and wobbly (and offers absolutely no support), and the east bank of the creek has slumped leaving a steep, loose scar. We sized it up and shrugged, and then up we went. It turned out to be pretty easy to climb up – descending would definitely be trickier and it wouldn’t be much fun if it were wet – and we rejoined the original trail at the top. We ambled along Millstream catching up – it’s been a few months since we last hiked with Andrew so we were long overdue another trip out. The forest was bright, the trail turned into an old logging road after we crossed the east branch of McDonald Creek, and it was just so relaxing and easy going.

Reaching the Brewis Trail, we turned left up the slope and deeper into the trees. The forest was mostly second growth with very little understory until we approached the power-line cut of the Skyline Trail. Here spring was making its presence felt with many flowers in bloom and ferns unfurling. After a brief glimpse of the sky, we headed back into the forest, continuing our way uphill. It never felt that steep, but looking at the map we found we’d gained nearly 200 m already. 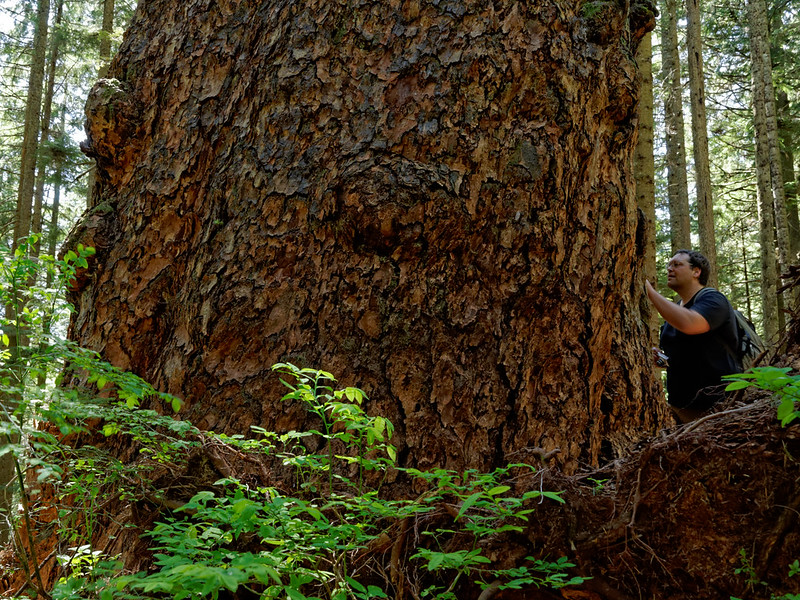 And then we reached the Hollyburn Fir. I looked up and did a double take: ahead of us lay the most enormous tree trunk, and one that dwarfed all of the surrounding trees. We marvelled at it and wondered if it was still alive, thinking that it might just be an old snag. As we reached its base we could see that it was indeed very much still living, with a canopy soaring above its neighbours. A nearby sign told us that this was the famed Hollyburn Fir, a tree I’d heard- and even seen pictures of but had never encountered. I think we spent a few minutes just staring at this huge relic of the forests of old before either of us thought about putting our cameras to use.

How to capture such a large tree? And how to get over the scale when a photo is going to be viewed – at best – on a TV screen? I tried a few shots, making good use of the ultra-wide angle lens to get the full height of the tree. None of the photos I took really give the correct sense of scale. I may just have to go back and try again… :-)

Moving on, we found ourselves walking through a section of forest that was either old-growth or had been logged very early on and was beginning to recover quite well. Here we saw many Queen’s Cup leaves decorating the forest floor, some of which had the first flower buds. It’ll still be a week or two before the flowers themselves appear, and I look forward to seeing them :-)

The trail led us back over McDonald Creek where we found the remains of an old cabin. Soon after that we came to the access road for the Hollyburn cabins and bright sunshine again. We turned left and followed the road for a few hundred metres, passing another huge tree right at the roadside, this time a red cedar. It’s a wonder that tree is still standing given the way the road has undercut the embankment. 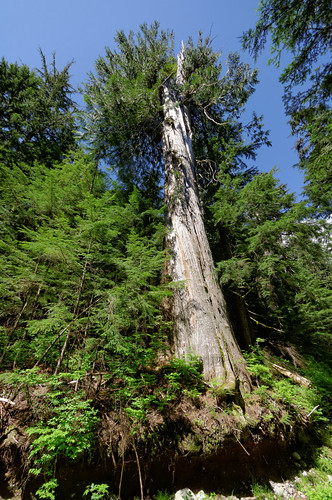 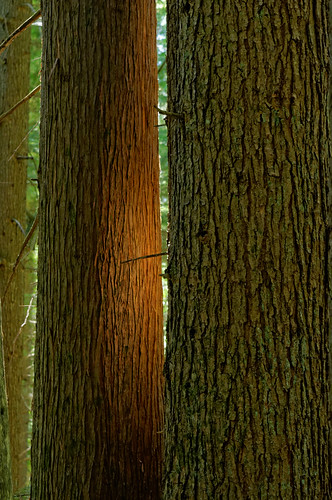 We passed a few mountain bike trails disappearing down the hill into the trees before reaching our turn onto the Forks Trail. To our surprise a few old red cedars remained standing among the match-stick forest. A red-headed sapsucker tapped away on a nearby snag, and didn’t seem too fazed by our presence. Grouse boomed further into the forest, and at one point we’d heard eagles overhead. Wrens trilled all over the place. The afternoon light in the forest lit up the trees with a warm glow, something we both remarked on and – of course – tried to photograph. We both took the same scene, with different interpretations: I captured the close-in shot of the light reflecting off one tree onto another, while Andrew opted for a wider-angle view (linked in the comments for my photo on Flickr). I like both.

Now we just had to continue on downhill. Despite old signs to the contrary, it was clear that Forks was heavily used by mountain bikers. We crossed over Marr Creek on yet another badly damaged bridge before finishing off our descent and re-emerging from the forest at the switchback on the road. We stopped long enough for me to photograph some of the columbine before sitting down for some lunch with a view of the city. Definitely a great little hike – not spectacular, but enjoyable all the same. Best of all was the fact that we’d encountered perhaps half-a-dozen people at most all afternoon, compared with the hordes we saw at Whyte Lake and Lighthouse Park. Plan C was definitely the right move.

And then we hit traffic going back into Vancouver… Ugh. We met up with Maria in Olympic Village and celebrated with generous (and well-deserved?) servings from Earnest Ice Cream. :-) 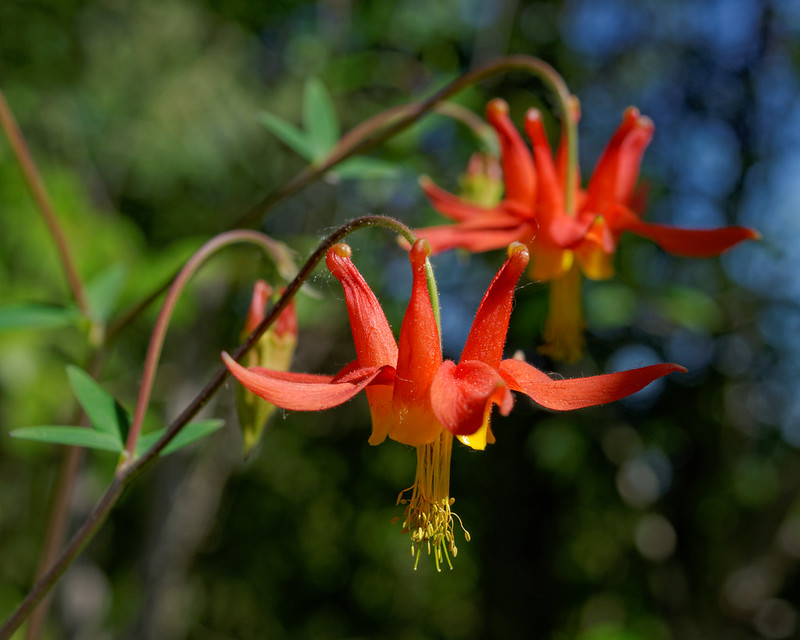