Now is the time of the flowers along the Heather Trail. On a fine sunny day there can’t be any easier hikes with such a visual reward. The trail is easy going (if a little rocky in a few places) with stunning floral displays all around, and fantastic mountain vistas ringing the horizon. The hardest part of the hike is deciding when to turn round. Oh and the last kilometre or so uphill back to the car. Beware the staircase of doom…

Buckhorn campground is nicer than I remember and is well situated for an easy-going one- or two-night backpacking trip. With the increase in popularity of backpacking, I think this campground would benefit from the addition of 3 or 4 more tent pads. I know this means sacrificing some meadowland but it’s better than it just being trashed by people random camping, which is what is happening right now.

My only complaint is that I just wish hikers would yield properly to one another where the trail is narrow, rather than simply stepping onto the meadows and continuing to walk without a care in the world. How about just stepping aside on a worn area or rock to let oncoming hikers through (especially backpackers!). I stopped more than once when this happened, and gently ushered folks back onto the trail. At least they had the decency to look just a tiny bit guilty…

Busy! The parking lots at Blackwall Peak were completely full, and we ended up parking in a pullout a few yards down from the upper parking lot. The trail was busy too, lots of day hikers and a few folks heading through to Kicking Horse campground. Just a few tiny patches of mud but otherwise the trail is in fine condition. The section from the treeline above Buckhorn to Bonnevier is loose and rocky in places (which I guess is why a second trail is now being forged alongside it…) but isn’t difficult.

We camped at Buckhorn campground, ventured up to the Bonnevier junction the first night (ate dinner by a nice little group of spruce trees). Our second day we hiked almost as far as the turnoff to First Brother but ran out of time.

Camping is only $5 a night per person – either pay online beforehand or at the front desk in the lodge (cash only). Don’t be cheap and skip it. The tentpads at Buckhorn are in decent condition, the food cache did close properly, but the outhouses are essentially at capacity. New ones need to be dug, and pretty soon. The campground was busy and we bagged the last tentpad. At least two tents were camped on the meadows, and there was evidence that someone had recently camped in the meadow behind our tentpad too. The creek is running well and is a good water source, and just the right temperature for chilling beer.

The flowers are at or near peak bloom. I’d say there will be another 2-3 weeks at this level before they start to die back. The meadows near the parking lot are sparse with a few species, but the best of the meadows are between Bonnevier and First Brother. There are a few good pocket meadows in the forest on the descent to Buckhorn, and at Buckhorn itself. 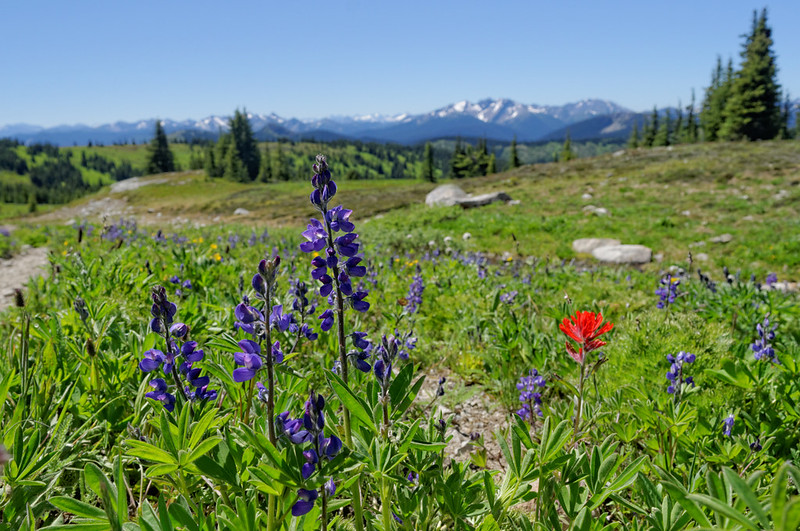