My long-awaited return to Golden Ears was an unqualified success. Yes, it’s a bit of a slog but it’s also a really satisfying summit to reach. Maybe I’m fitter than I was in 2008, maybe I carried a little less stuff this time, but I didn’t find the various nasty stretches of this hike to be so bad or endless, or the uphill too hard. And I easily conquered the airy ledge that prevented me from reaching the summit. This time I really enjoyed the scrambling.

We summited about an hour before sunset (joining one other person up there) and enjoyed some beautiful evening light. I’m not a peak bagger, but there’s something to be said for getting the view from a point where there’s nothing higher close to you. My favourite sight was the triangular shadow of the mountain cast onto the valley far below, closely followed by seeing a giant orange ball on the eastern horizon as the moon rose.

It’s a pity that it takes about 8 km of mostly uninteresting hiking to get to the good stuff, but as the Copelands have said, sometimes you gotta pay if you wanna play. Beyond about the 8 km mark, I’d describe the trail as stunning and I would enjoy hiking this section time and time again. Old-growth forest, a bit of scrambling, and incredible 360-degree views.

Sadly I think this hike now attracts too many people with not enough respect for a) other people and b) their surroundings. Music, loud voices, used TP, air horns – the only saving grace was that no one attempted a camp fire. This time – plenty of evidence of past camp fires all over the place. (In the main campgrounds, several people were expelled for repeatedly ignoring the current campfire ban. Idiots.)

The trail is mostly in good condition and dry. The short section where the trail climbs steeply up through the forest away from the old logging road is simply awful and would seriously benefit from putting in some steps as in other parts of the trail. Orange diamond markers dot the trail to keep you on track, even up towards the summit, where flagging tape takes over. Kilometre (and half-kilometre) markers allow you to tick off the distance: Alder Flats is between 5.5 and 6 km, the emergency shelter is a bit past the 10.5 km mark.

As ever, camping on Panorama Ridge is simply awesome. There’s good running water at the moment (nice and cold!). Good camp spots are as tricky to find as I remember from our last visit but we ended up camping just a few feet from our 2008 spot :-) Near the emergency shelter there is very little soil for pegging down a tent – we used rocks and spare guy ropes to make sure our tent stayed put. Which reminds me, it was pretty windy up there on Saturday night. Quite a few people were camped on spots above the shelter (and above the water source) – I just hope that they weren’t doing anything up there to compromise the water… Which brings me to the outhouse. A new porta-potty was installed earlier this year and let’s just say that it needs emptying (insert grossed-out emoji here…).

One other reminder that shouldn’t need to be said but remember that voices carry really easily in the alpine, and the walls of a tent don’t keep your endless stream of verbal diarrhoea to yourself. And please use your indoor voice. And don’t yell to your hiking buds that you’re too wimpy to go with them at 5 in the morning. It’s not cool and makes you look a total douchebag. Apologizing about it later is kinda hollow. And don’t keep letting off your air horn “for fun”.

Alder Flats doesn’t seem so bad on a warm, sunny day. There is water just before the campground, but the creek running through the campground itself is dry. The outhouse has a creaky metal door (presumably to stop idiots ripping it off for firewood), and it’s big enough to walk through with a full overnight pack. Yay!

We were warned about the blackflies by some hikers on their descent and were they ever right! I was killing blackflies left, right, and centre and they still kept coming! Filtering water was an exercise in pump-pump-swipe-pump-swipe-pump-pump-swipe-swipe etc. Even taking a photograph. Thankfully I only picked up about half-a-dozen bites. I was often taking two or three photographs of every scene just to make sure I got one without a defocused bug in the frame! Thankfully they were only this bad above the treeline; the rest of the hike was pretty much bug-free.

Don’t expect solitude – the parking lot was full when we turned up at 8:30 am on a Saturday morning. Most people were day hikers/runners going as far as Alder Flats or all the way to the summit. But plenty of folks were hauling overnight gear up there, and were still arriving at sunset (plan ahead, people!).

You must pay for your camping online beforehand – there is no way to pay at the trailhead. I didn’t think to ask in the store if I could pay there but it would be worth inquiring. 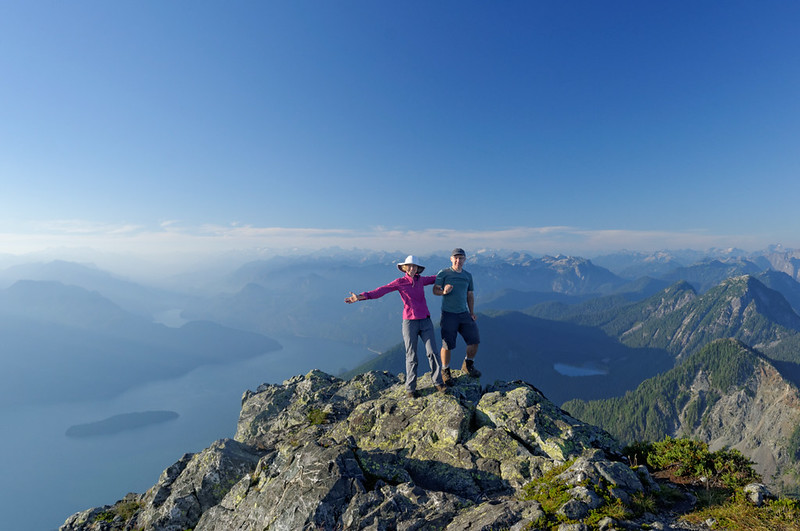