So just when did that happen? At what point did I cross over into thinking that the BCMC trail was easy? Well, you know, not exactly easy but not exactly hard either. I can only assume that it felt that way because it was so short, we took it easy, and we didn’t have to hike back down the slope.

I can’t say I particularly like this trail, but at the same time I don’t really dislike it. Today, the light was good, the trail was quiet, and it was an hour-and-a-half’s peace and quiet in the forest. That’s gold.

It’s dry and dusty along the BCMC trail right now. In places it’s hard to know which braid is the “correct” trail, but following the markers on the trees keeps you on track well enough. We met far more people coming down than heading up, but then we did start quite late in the day. There did seem to be a few more signs that on my last visit in April 2015, but maybe I just noticed them today?

Watch out for a wasp’s nest at around the 3/4 km mark (about 530 m elevation). It’s helpfully signed with a piece of paper in both directions. There’s a little side-trail that acts as a detour, and we had no issues avoiding it.

Parking is $4 for all day; in retrospect we could have got away with spending only $2 for 3 hours. The download ticket is still $10 even.

This was Plan Bb – if that makes any sense (no, it’s not B-flat). Our original Plan B was to hike up to Goat Mountain, but we figured we’d just make our way up the BCMC trail first and reassess the situation. Plan A was an amble around the various lakes and ponds on Mt Seymour, devised when the clouds were covering the mountain tops. By the time we’d pulled ourselves together and had a quick chat with family, the clouds had cleared and Plan B was put into action.

Getting over to the North Shore was mostly uneventful – Saturday daytime traffic in Vancouver can be pretty awful – and we found a spot in the parking lot, paid our fees and off we went under the hot sun. On reaching the entrance to the Grind and Baden-Powell Trail, we’re greeted by a new sign. It says, “Legs, you got this!” and is brought to you by Lululemon. I’m guessing this is aimed at Grinders because we got no more such encouragement on our ascent. 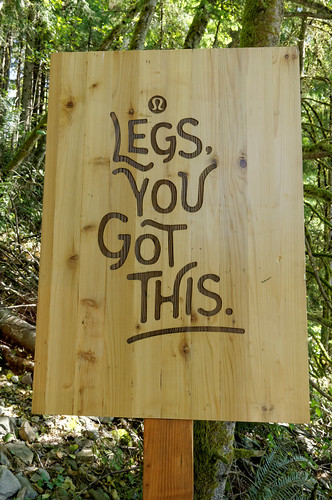 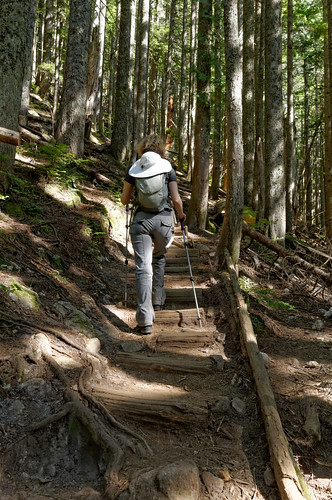 As ever, getting to the turnoff to the BCMC trail takes longer than you think (even though it’s not very long), but it’s well marked and so away up we went. Starting a hike in the middle of the afternoon doesn’t seem like the most sensible thing to do, but we set off at an easy, relaxed pace, plodding along trying to get into our second wind as painlessly as possible.

Roots, rocks, and dirt – that pretty much sums up the entire BCMC experience. In places it was a nice enough trail to hike, but most of the time we’re picking our way over rocks and roots. At least it was dry today, even if that meant it was dusty, so we had no issues with grip. The forest here is uninteresting – tall second-growth with no under-storey – but the sunshine was welcome, and made things a lot less dreary.

This trail has been in place for a long time, and it’s been almost as long since it saw any maintenance. Sections of the original trail remain, with the ghosts of old steps poking out of the ground, so it’s pretty easy to remain on track. The sheer number of hikers over the years has resulted in lots of braiding, especially near corners. Some trees have half their root network exposed, which makes for lots of nice steps, though of course at the expense of being slippery in the wet.

Twenty minutes or so in and we meet someone descending who was put off by a sign warning of wasps. He seemed new to the area and didn’t want to risk going off-trail to avoid them and had decided to return to the Grind and hike up that instead! If he was that worried he could easily have stuck with us as we took the little side-trail detour around the warning signs. We saw no wasps, and continued on up the trail as before.

Up and up, and then more up. You have to watch the trail markers to keep on track as there are many faint side trails all over the mountainside. As we reached the upper stages of the trail, a magical thing happened: greenery began to appear. We left the desolate forest behind to be surrounded by berry bushes and smaller trees, bunchberry and queen’s cup leave decorating the forest floor. OK so the trail was still as bad as before, but the sunlit green was definitely pleasing to our eyes. 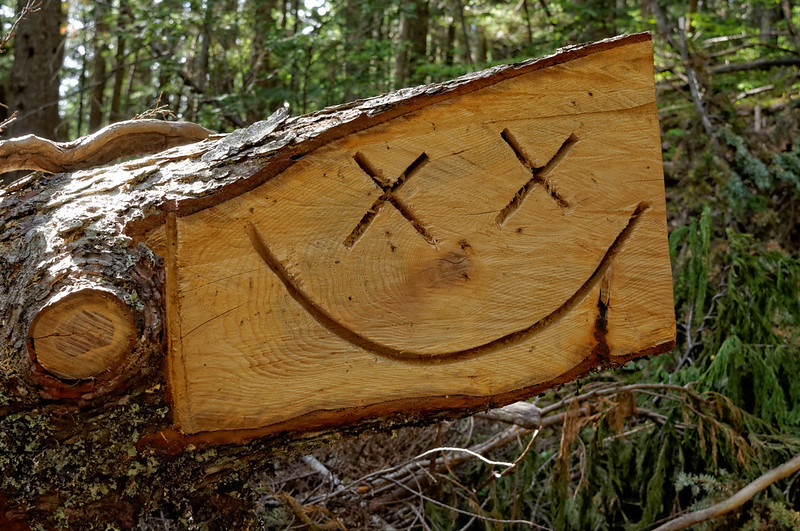 We passed another fallen tree that had been cleared from the trail, marked again with a smiley face (albeit with X’s for eyes) like two others further down. Soon after we reached a trail junction that I’d marked on my previous visit, and took the left fork (now signposted to Grouse), following the pipeline up the slope. For the first time we noticed a bad smell associated with the pipeline and we surmised that it might be a waste pipe – yuck! – or at least, grey water. Either way, it was kinda stinky and a bit of a rude awakening.

Speaking of rude awakenings, it was easy to tell when we were approaching the Grouse chalet by the blasting music… Ugh. Well we had solid peace and quiet when it mattered. Turns out the music was associated with a wedding, and it seemed that the bridge and groom kissed the moment we walked under the balcony where they stood. Awww :-) At least, I assume they weren’t all cheering us arriving at the chalet… ;-)

As we entered the maelstrom we remarked on how we felt today, and how we felt 12 years when we first hiked up the Grind. We looked at each other and asked if that hike was hard – both of us said no. Really? That’s not a hard hike any more? We’ve come a long way in terms of our hiking fitness and experience!

We grabbed a drink and a snack and pondered the rest of Plan B. The clouds had rolled in again, and was drifting around the local peaks. We briefly considered going part way but reconsidered, firmly deciding that we’d want to see the views from Goat on a clear day. Thinking back, it took us three attempts at Goat a decade ago before we got a clear view! I think we can afford to be picky.

And so all that was left was to join the long line waiting for the ride back down, under the watchful eyes of another Lululemon sign thanking our feet (which – funnily enough – struck us both as weirdly inconsistent with the first sign – but maybe there are linking signs on the Grind?). A quick ride down, a view of the Capilano Reservoir looking a little depleted, thinking ahead to the return of the salmon, and then back to the car and home for some well-earned burgers. Not a bad Plan Bb.