Opinion:
Fun in the snow, or the rain. I like the varied terrain on Seymour even when there’s nothing to see, like today. But snowshoeing in the rain really is a miserable experience.

It was a mix of rain and sleet most of the way, only turning to snow beyond Brockton Point (and even then it was variable). We were surprised at how quickly our snowshoe tracks were filling in behind us! I wonder if they’ll even be visible tomorrow. Take care around creeks – some of them were still open in places, and would be hard to get out of if you fell in. Visibility was non-existent: it was quite eery looking over towards the void beyond Suicide Bluffs and seeing nothing but grey… The snow was wet and heavy, but it was still fun breaking trail.

Not many people out as expected – a few snowshoers and a couple of backcountry skiers who only went as far as Brockton Point. On our way back we ran into a group of 4 snowshoers near the trailhead decked out in jeans. My rain gear was soaked through, as were my gloves and backpack (turns out my waterproof stuff-sack isn’t). Jeans were definitely the wrong thing to be wearing today… Still, I suspect they didn’t go far.

Story
Our friend Brenda was visiting Vancouver for the weekend, and decided to come a day early to get some outdoors time. Maria was working, but I had all the free time I needed to join her for a little snowshoe trip on the North Shore. The weather forecast was poor and it was debatable that it would even be snowing up in the mountains. But after a quick consultation we headed for Mount Seymour and figured we’d just go as far as we felt like.

Pulling in to the slushy parking lot, we sat in the car for a good 5 minutes before even thinking about venturing outside! It looked so unappealing… But we counted to three and made the plunge to kit up and get going. And no, it was not very nice – to put it mildly! The prospect of the sleety-drizzle turning to soft snow lured us onwards and we were soon wandering up the trail. 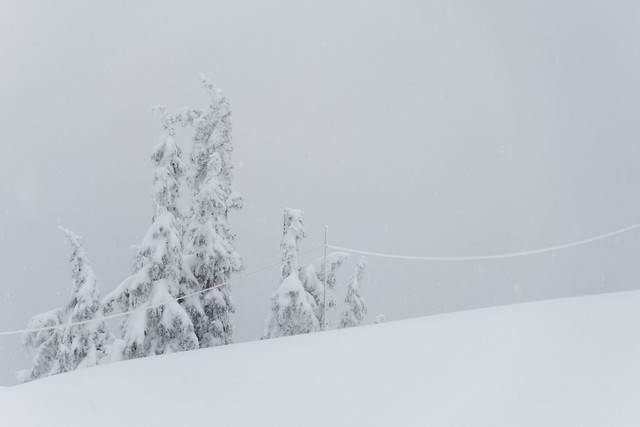 The snow was flattened into an easy trail and we plodded uphill. I reminisced of my first snowshoeing experience on this very trail back in 2005 and I can still vividly remember the burn in my muscles after only 100 m or so! No such issues today :-) We paused briefly at the Tim Jones memorial, now iced in wet snow. I noticed that the trail up to Dinkey Peak was actually blocked with tape, and there was no sign of anyone having headed up there recently. I found that a bit puzzling, as I don’t remember there being anything tricky about that trail.

We wended our way through the snow-covered cedars, hemlocks, and firs and paused for a rest at the turn off to Suicide Bluffs. A skier caught up with us and we chatted for a while. He mentioned that a new summer route was being established that stayed away from the ski run. It’s been a while since I was up here in the summer so I didn’t know about that. He veered off the winter route to discover that new trail while we carried on. Reaching the top of the next climb, we met up again – Brenda and I had actually got there first, and the skier remarked that the new route was certainly not a short-cut!

We passed another couple of snowshoers heading back down the trail, climbed the next steep hill (which is a good place to slide back down on your bum!) and before too long made one final push up to Brockton Point. The rain was kind-of turning to snow, and we felt like we’d only just got into a groove, so we opted to continue. We passed the warning signs about entering avalanche terrain and picked up the trail again, as another couple of snowshoers descended past us. 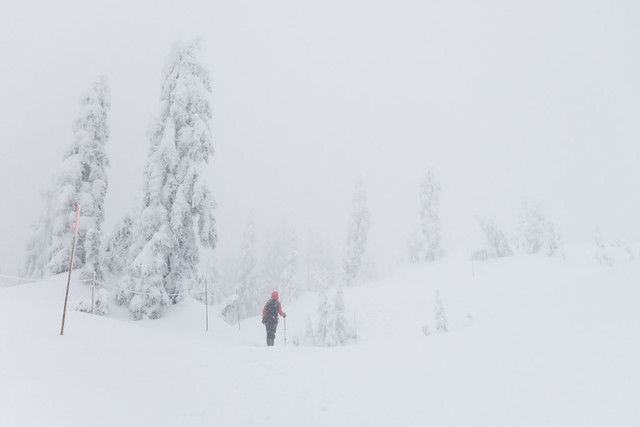 We followed the trail down into the next drainage and came to a point where I knew the summer trail peeled off, while the snowshoe steps we were following continued down into the trees. Thinking that the people before us may have found a way through we duly walked on, only to reach a dead end where the previous snowshoers had turned around. We backtracked a little and began our trail-breaking for the day. Thankfully the snow was firm enough that we weren’t losing our energy at every step wading through deep powder (not that we often get powder on the North Shore).

I knew where the summer trail went, and we followed the markers until we reached the reason for the winter route being different in this area: a 45+ degree slope of untracked snow that we had to traverse. Not having my ice axe, and not really knowing the stability of the slope, we turned around again to look for a way around. That too led to a dead end and so we took ourselves back to where I knew the winter route was usually marked. We stomped our way up the creek drainage until we could turn east onto a small ridge. One more dead end and then we found the safest way back down to rejoin the summer trail markers again. Yay!

We descended once more and turned into a small meadow below some cliffs on the east side of Mount Seymour. The creek was mostly buried, apart from a couple of open spots which would have been difficult to get out of! We found a solid way across and made our way back to the trail markers, following the route through the trees towards the junction with the Elsay Lake trail. 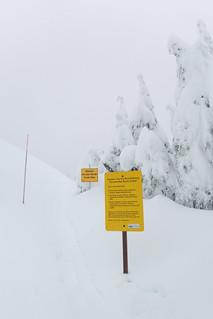 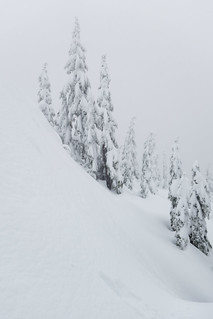 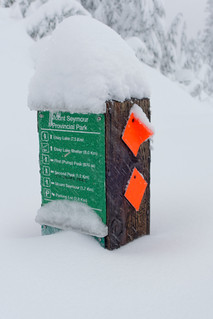 At least it was snowing now! We paused at the junction, and considered our options. We knew the steep climb that lay ahead, and we also knew that there was no way we’d get any views. Despite the snow, the earlier rain had started soaking in, and I was beginning to feel cold. All these factors made the decision to turn back really easy. We sought out some cover to munch a snack or two (it always nice to hike with people who bake :-) before retracing our steps back to the car.

We ran into another backcountry skier at Brockton Point, where the snow had reverted to rain once again. There was no point hanging around so we bounded and slid our way back down the hill. I did actually sit down and slide in a couple of places, which was fun knowing that there was no one heading up to run into. We’d only seen half-a-dozen people in total all day. However, on our way back we met a person with three unleashed dogs who (after offering us a lost cell phone to hand in at lost property) proceeded to complain about the fact that the park rules insist on leashed dogs, and who felt that easily-accessible backcountry areas should be provided for dogs to play in the snow off-leash. And they have to be close to Vancouver because, you know, can’t be expected to drive very far. Yeah right. Entitled much? They’d already had to walk past three signs that say dogs should be leashed, and they’d already been advised by a park ranger that their dogs should be leashed… Sorry, you’ll get no sympathy from me. You chose to have three dogs. If you don’t like the rules go elsewhere. If you don’t like that, then just stick to the rules. Really. It’s not that hard.

We walked off shaking our heads at that attitude. It wasn’t long before we were back at the parking lot, where we met the already-wet and cold-looking snowshoers in jeans mentioned above. By now whatever traces of snow there’d been earlier had turned to 100% cold rain, and there ain’t nothing worse than snowshoeing in the rain! Hopefully our soggy appearance put them off and they decided to do something more fun instead.

As for us, we were so glad to get back to the car. Time then for a hot drink, and home for a hot shower and a hearty bowl of veg chilli. Despite the wet gear (which took nearly two days to dry!) we both felt it was worth getting out, just for the fresh air, the quiet, and the bright light in the snow. Type II fun at its finest!