Opinion
The view from Eagle Bluffs is great, though it’s a greater descent from Black Mountain summit than I remember (over 100 m). Despite the sunny day, it felt like we spent a lot of time in the trees or in the shade which was disappointing. So, overall, not as enjoyable as I remember but the views were still great (I could just make out Mt Rainier far to the south) and wandering the plateau with all its tarns is always relaxing.

Fact
A steep climb up alongside the ski run gets you warmed up quickly, but be prepared for very cold air near Yew Lake at the beginning. We were greeted by a chilly northerly breeze at the north summit too which had us beating a hasty retreat. Brr!

The trail was hard-packed all the way to Eagle Bluffs and snowshoes weren’t necessary, although Yak Trax or similar were helpful in places. Note the winter route out to the bluffs is not marked, though it’s usually easy to follow – the summer markers can still be seen, and to be honest, someone else will probably have been through before you. Still, it’s a good idea to have a map and compass, and/or GPS with you to make sure you aren’t led astray. Remember you lose well over 100 m of elevation from the plateau down to the bluffs that you have to re-gain on the way back.

Off the trail, the snow was soft but firmed up quickly underfoot so postholing wasn’t too bad. It was actually easier going without snowshoes than the deep powder we encountered in the Coquihalla at New Year was with snowshoes! Watch out for cornices on the west side of the north summit of Black Mountain.

Parking wasn’t an issue (as it shouldn’t be on a Wednesday!), though the lot was icy. Don’t forget to pick up your backcountry pass at the old day-use lodge and move quickly through the Backcountry Access Corridor to avoid being run down by overly-nonchalant skiers. (I feel there should be more net gates here to slow down the skiers.) To my surprise, the Cypress staff didn’t seem bothered about checking our passes and were more concerned with the skiers. We arrived around 10 am so weren’t affected by the overnight closure (which I won’t get into here) so I can’t comment on how strict they’re being with that.

Ravens came in search of handouts at both summits of Black Mountain, and at Eagle Bluffs. They are getting bolder every year and approached within a metre or so without us even pretending to hold out food. Still, they do flutter off if you turn the tables and approach them. We encountered a few whisky jacks at the south summit, and a Steller’s jay as we dropped off the summit to pick up the trail to the bluffs. A few snowshoe hare tracks but not many. 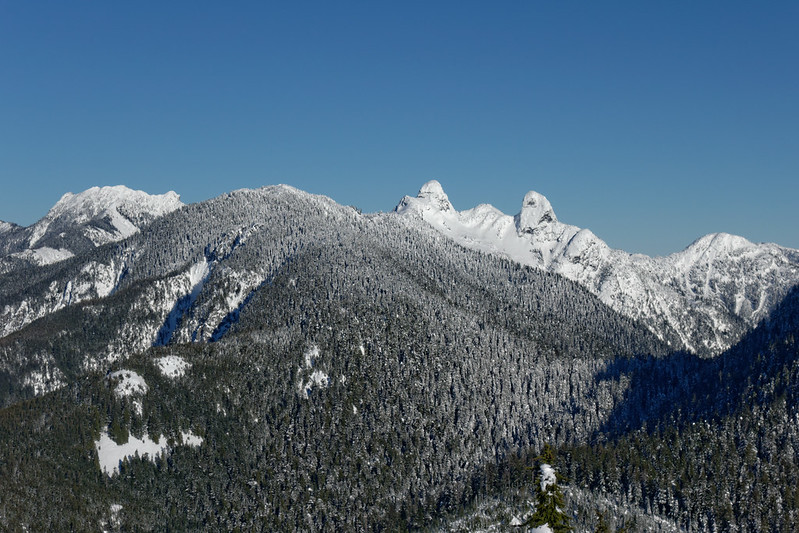 Story
I wanted to get out in the snow and sunshine again so was happy when my friend Gloria got in touch and suggested a similar outing. With the Lions Gate bridge closed due to a police incident, we took the Second Narrows crossing and made remarkably good time up to the parking lot at Cypress Bowl. Knowing the North Shore conditions and recent weather, I tied my snowshoes to my pack and walked in my boots – I was pretty sure I’d be OK but I figured it’d be worth having my snowshoes with me in case I wanted to do some off-trail exploration.

We set off around 10 am, picked up our backcountry liability waivers and set off through the ski area. The resort staff took no notice of us as we walked through the barrier. Reaching the trees, we were hit by a blast of cold air. I remember this from my winter 2014 trip to St Mark’s where it was bitterly cold near Yew Lake and my group was so happy to find its first patch of sunshine in which to warm up!

We hurried up the trail to warm up, crunching away on cold hard-packed snow, and soon left the coldest air behind. Our pace eased a little and we set about the boring switchback climb alongside the ski run. I saw some snowshoe hare tracks leading off down the hill which reminded me of all the tracks I saw recently in the Coquihalla. The snow cannons were in full flow, blasting a jet of snow-like stuff over the ski run, and occasionally over us too as the swung through their dispersal arc. It definitely wasn’t real snow – more like frozen water as it melted out wet immediately on contact.

It wasn’t too long before we left the ski run and the noise of the snow cannons behind and the trail levelled off a little before another short climb to Cabin Lake. Gloria had put on her microspikes, but I was still fine without. We turned right and followed a beaten trail to the north summit, stopping occasionally to admire the views we had earned. The trees were beautifully decorated with snow, as we’d seen on Hollyburn on Christmas Day, and we could see easily across the water to Vancouver Island.

As we reached the north summit, where we were planning a lunch break, an icy northerly wind hit us full in the face. I stayed long enough to take a few pictures but my eyes were watering in seconds, and so we backtracked to a sunny bump with views over Cabin Lake and beyond. A pair of ravens swung by to see what was up; one stayed in the tree while the other scoped us out for treats. Not on my watch. Still I was able to get a couple of nice close-up photos. 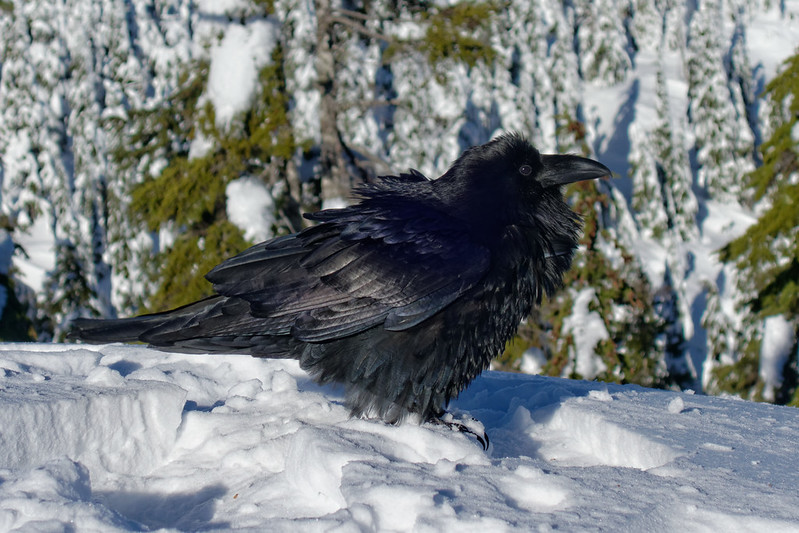 Warm sun, hot drinks, and some food made life feel good. I guess we could almost have called it a day there and then, but to be honest I really wanted to go out to the bluffs – if for no other reason than to get a GPS track! We dropped back down to Cabin Lake, took a few more photos, and plodded on up to the south summit which was occupied by another hiking group (we’d had the north summit to ourselves). The ravens joined us again, and were accompanied this time by a handful of whisky jacks. They all quickly lost interest in us when no handouts were in the offering.

More views, this time over towards Hollyburn and Grouse, Crown looked spectacular, as did Golden Ears. Mt Cheam and its neighbours were easy to spot. And in the other direction, the Sunshine Coast and Tetrahedron peaks. All good subjects for photos. 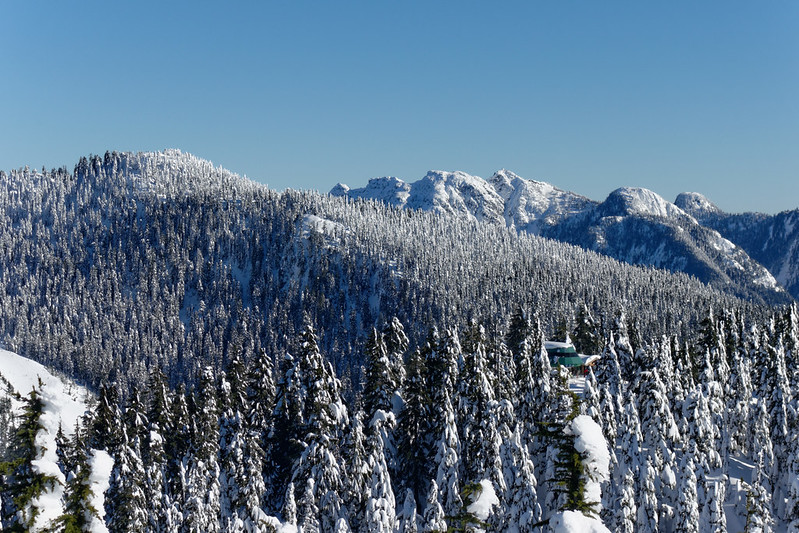 Moving on, we dropped down from the south summit, zig-zagging steeply through the trees. At one point I looked up to see the snow-blanketed branches from underneath framed by an azure sky. Just beautiful. The whisky jacks found us again, as did a Steller’s jay, though none approached too closely. 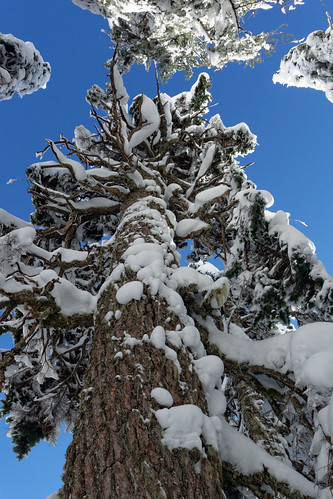 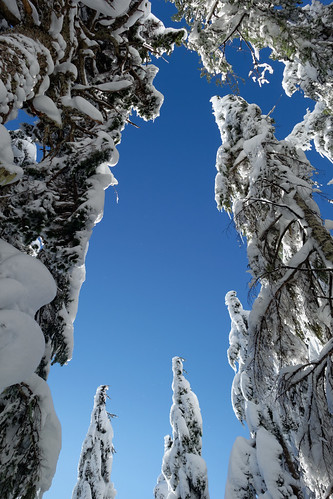 Once we levelled out, we checked the time and our energy levels and decided to go for Eagle Bluffs – yay! It’s hard to believe that it’s been 4 years since I was last on this trail, in those long-forgotten pre-GPS days! The trail was easy to follow, despite not being marked with poles, and we had it to ourselves. This was the most peaceful part of the trip as we passed a few more ponds and tarns (always welcome for the space and the sunshine) before beginning our long descent towards the bluffs. And I have to admit, the descent felt greater and longer than I remembered; I was actually a little concerned about having to retrace our steps back up this slope!

But thankfully it wasn’t actually too long a descent, and we emerged from the trees only 20 minutes after making the decision to head this direction. For once, the bluffs were sheltered from the wind and we basked in glorious warm sunshine. I’ve been here at times when we’ve had to take shelter from the howling gale. Yet again, a pair of ravens called by to check us out. I followed one around to get some video, albeit grudgingly on the part of the raven. It wandered off and began a little snow bath: poking its head into the snow and pushing itself through in a comical fashion.

A larger hiking group was occupying the lowest point on the bluffs so we hung back in a nice sheltered sunny spot. As they left, I wandered down to get those views for myself, to grab another couple of photos. The sun was blindingly bright on the water and I had to be careful to avoid it in order to prevent a possible migraine trigger, but also to avoid sunglare in the photos – the RX100II produces some unpleasant artefacts if a very bright light source is in the frame. (These are the well-known red-splotches – it seems to be a characteristic of compact cameras.) 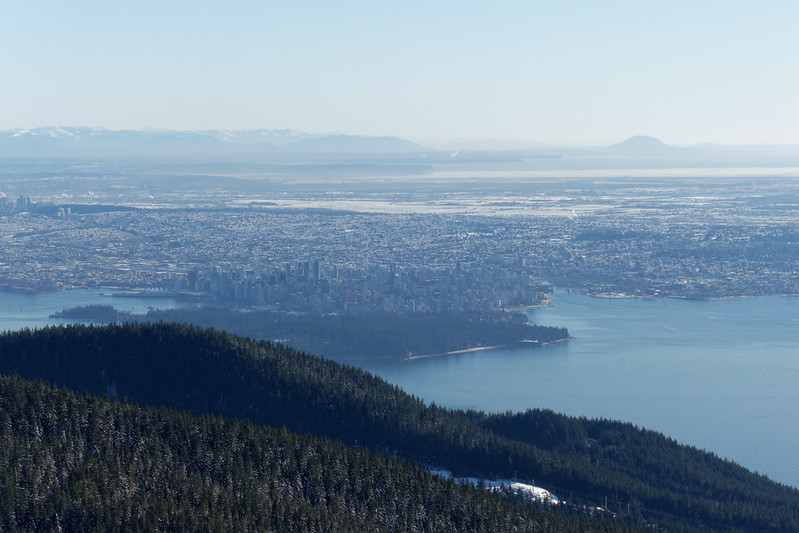 We could have spent longer here, but it was time to move on. Thankfully the climb back up wasn’t as intimidating as I imagined, and it was only another 20 minutes or so before we were back up on the plateau. Faced with going back up and over the south summit, we instead decided to follow the marker poles around on the plateau loop. I was a bit concerned about how much extra up-and-down this would add as it felt like it was quite “lumpy” when I hiked it on the summer solstice. Perhaps it was all the roots and mud as walking the winter version was easy. We followed a line of tracks right across one of the lakes, if nothing else than to enjoy some more sunshine warming our backs! But I also found some interesting snow shapes and patterns, one of which looked a bit like a map of Olympus Mons on Mars with its concentric rings and wind-blown rills and gullies.

One final climb back towards Cabin Lake to pick up the trail again, though we didn’t make it that far as we could see the poles leading back down the hill. We took the shortcut down a steep snowbank and emerged on the trail, having saved ourselves probably no more than 100 m of hiking :-) And now we rejoined the noisy ski run, hoofed it back to the car and took a steady drive home.

Just another enjoyable day out in the mountains.