Opinion
In 12 years I’ve hiked this trail 10 times so I must like it :-) I’m actually kinda torn – it does have great scenery, and it’s not too tough, but it’s far from my favourite hike. Having said that, I think there are two times in the year where it’s a really enjoyable hike. The first is as a snowshoe trip in fresh snow on a fine day, the second is in the fall – like today’s trip. The fall colour in Red Heather meadows is second to none, and it’s always a treat to get such great views of Mt Garibaldi, Mamquam, and the Tantalus Range. Plus we’ve had a couple of really nice bear sightings in this area.

Fact
The so-so weather forecast was wrong and we had mostly sunny skies all day. Garibaldi gleamed white in its dusting of snow from the day before, and the lakes were often still enough to yield perfect mountain reflections. We enjoyed a sunny lunch at a picnic table by the cook shelter rather than eating on the tent pads (which the other groups seemed to think was OK – a good opportunity to discuss some Leave No Trace principles).

The shelter was empty and every bunk now has a ‘reserved’ label on it.

The trail was quite busy – the parking lot was pretty full when we arrived – many of whom were backpackers on their way out. The hikers’ trail out of Red Heather meadows is being upgraded and is currently a bit of a sticky, slippery mud-fest. One of the backpackers on their way out slipped and ended up plastered from head to toe. We stayed on the main trail on our descent which meant keeping our eyes and ears open for mountain bikers (there were quite a few).

The meadows have plenty of great fall colour but precious few berries. Our only wildlife sightings were a falcon and a bald eagle – not even a whisky jack or chipmunk though we heard pikas among the rocks.

Another great day out and a great way to celebrate 12 years with Wanderung! 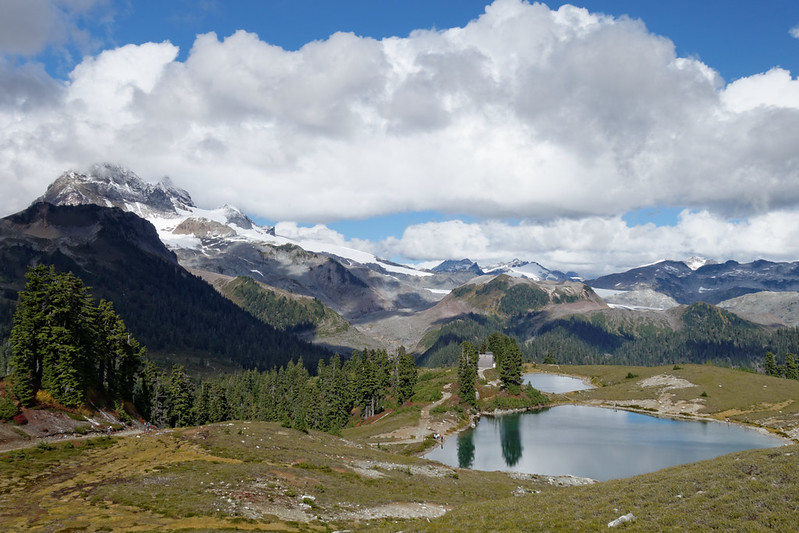 Story
You know, when I first hiked this trail, I was actually a little underwhelmed. It was a hot, dry day in early October, and at that time we weren’t especially fit hikers. We coped just fine with the hike, but it did feel long, and the dusty old road of a trail was hard on our feet. Plus we were in a group of 22 hikers, many of whom we never spoke to!

Fast forward a decade or so and I thought it would be great to revisit this trail almost exactly 12 years to the day since I first hiked to the lakes. (Our first trip was on October 3rd, 2004: today is October 2nd 2016 :-) I sent out a callout to Wanderung and quickly had a full car load. We set off early Sunday morning and made our way up to the trailhead.

To my surprise, the parking lot was almost full – a sign of just how many people were camping or staying at the cabin – but we found a gap between two cars and pulled on our gear. Setting off, we were greeted by a bright yellow sign that reminded campers that they must now have reservations (a big change since my first visit), although the reservation period for camping has just ended. We wound our way up the road, pausing as usual to take in the view of Squamish and the Chief after about 20-25 mins. The morning was mostly peaceful – we had to get round a small group with no concept of indoor voices but beyond that we walked the road, and chatted amongst ourselves. 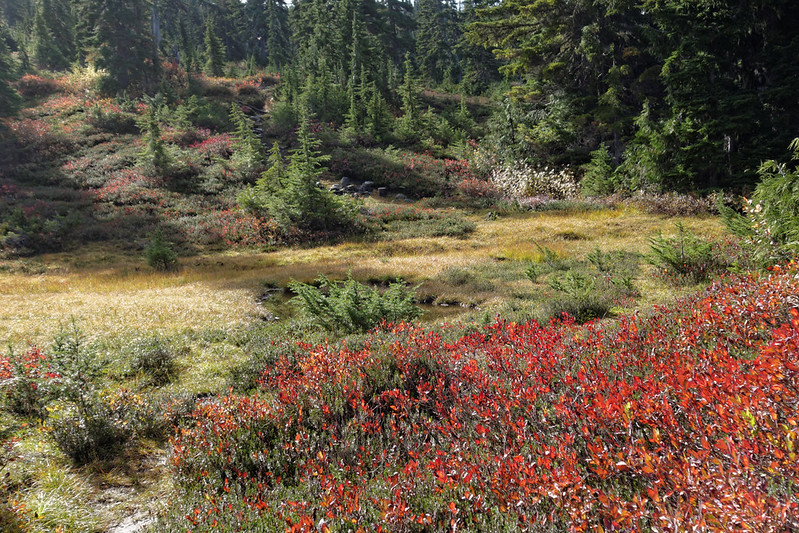 As we climbed we came to the first signs of fall colour – a small meadow filled with red and orange bushes, the dew sparkling in the bright morning sun. After what seemed like no time at all we reached Red Heather meadows and stopped for a comfort break. I remember being amused by the outhouse sitting so high above the ground (of course I had to get another photo of it :-) until I visited one winter and realized that I had to step down off the snow into the outhouse! That was my first realization of how much snow falls here in the Coast Mountains.

We met some backpackers on their way down. I say some but in actual fact it was an enormous group. There must have been more than 20 of them (sound familiar?), a couple of whom were looking somewhat muddier than the others. We soon found out why: the hikers’ trail out of Red Heather meadows was in the process of being “upgraded” which meant that with the recent frosts the trail-bed was actually a mud bath. And a slippery, oozy mud-bath at that. I quickly decided that we would not be descending on this trail. At least one of the downhill hikers had completely wiped out in the mud and was covered from head to toe… As we neared the junction with the road, the first gravel appeared – I guess they’ll finish the job next summer. As with all trail upgrades, it will be better in the long run though I always feel it robs the trail of some character. 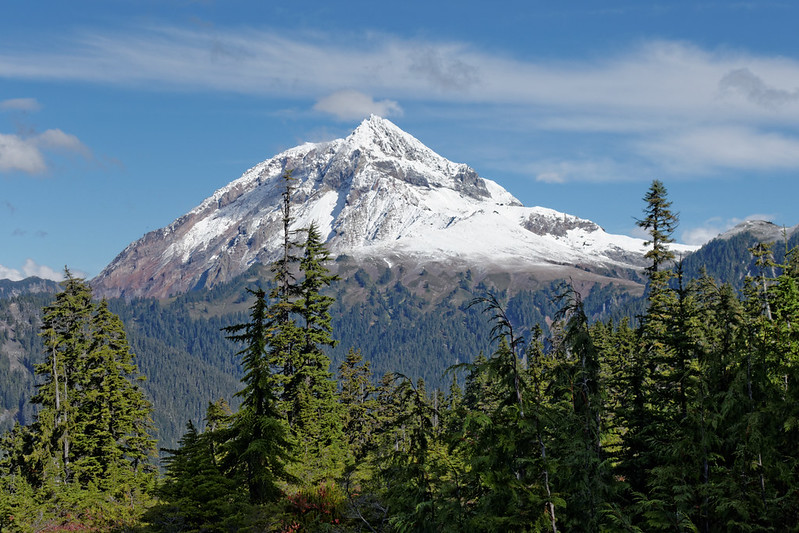 Now on the main road again, the going was easy. We had Garibaldi in our faces for the rest of the hike, its upper half gleaming white in its fresh coat of snow. Looking back, clouds drifted over the Tantalus peaks adding some extra drama to their appearance. We hiked, we admired the view, we chatted. Around us lay pockets of fall colour, and a pika or two squeaked in the rock pile on our right. More backpackers passed us on their way down and a few mountain bikers passed us on their way up to the cabin.

The first time I hiked this trail I completely missed the view of the Sky Pilot group. Now I know about it, I’m always looking out for that view, especially is it’s only visible for a short time. Such an impressive sight. Ahead of us, Mamquam loomed all jagged and icy, the dusting of snow on the peaks highlighting all the fine detail in the rocks. 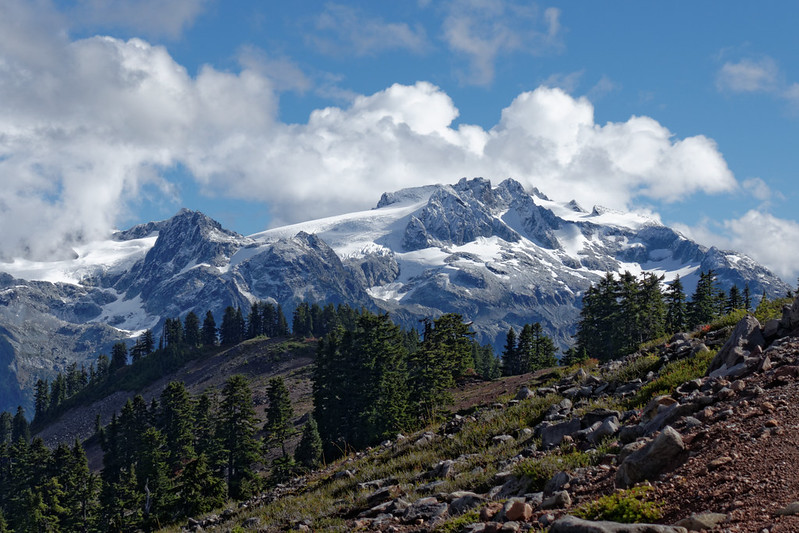 We came to the final slight rise to the knoll overlooking the lakes and stopped to take in the view before dropping down to the lakeside and then on to the campground for lunch. The tent pads were clear and offered a superb spot to sit and enjoy the view. A couple of groups were using them as picnic benches. But I insisted on using the table up by the cook shelter. After running all those Leave No Trace (LNT) articles in the newsletter my conscience wouldn’t let me eat at a campsite. 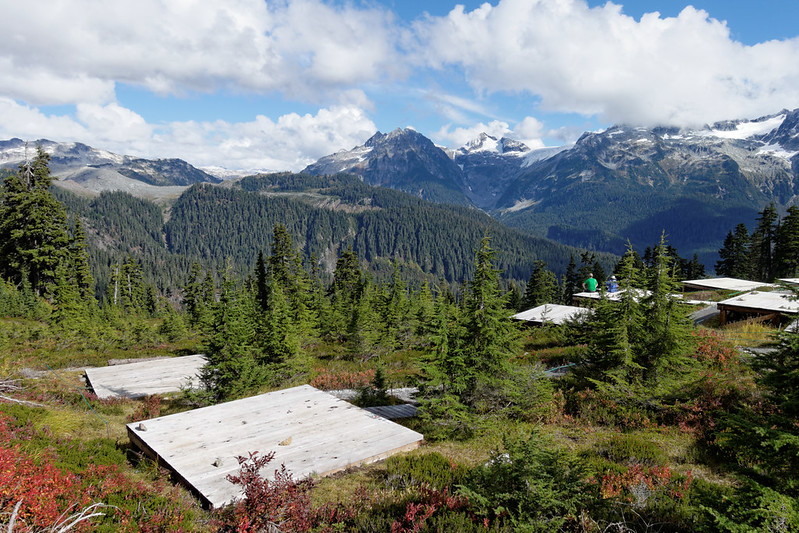 It was a good opportunity to chat about LNT in general and in particular, how you shouldn’t eat where you sleep in the backcountry. This seems so obvious to me it’s a no-brainer, yet awareness seems to be low: I see so many people doing it both at campgrounds and on social media. (One thing guaranteed to make me not “like” a photo on Instagram is for it to show people cooking and/or eating right next to their tent.) Alas, all too many have not got the message, and at Garibaldi Lake it led directly to the habituation (and eventual killing) of a bear. Bears grab the headlines in these cases but for me there’s a much more mundane reason for not leaving food scraps near your tent: rodents. Not only do they chew on anything that could be food, but they also carry some unpleasant diseases which I don’t want thank you very much! 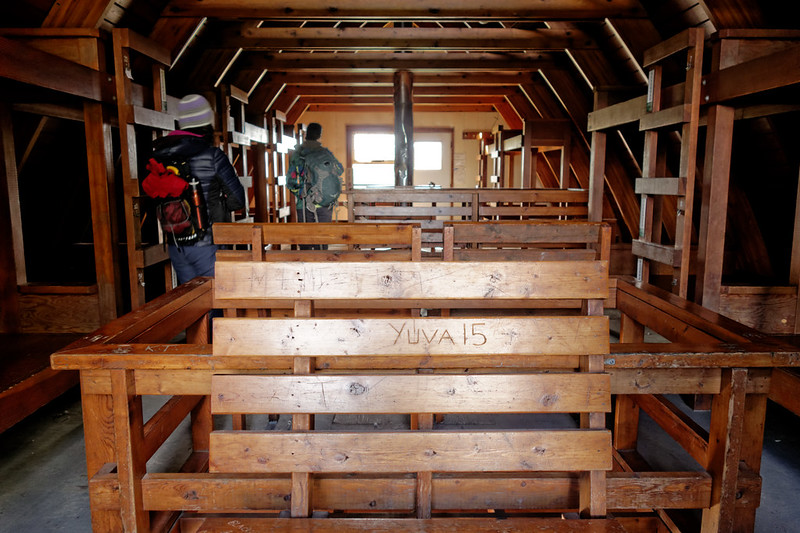 After a relaxing lunch in the sun, we headed over to the cabin to take a look inside. To my astonishment it was completely empty. Not a single person was staying there (though we did meet a few folks on our way down). One change I noticed immediately was how every bunk now had a “reserved” label on it. I think that’s only the second time I’ve been to Elfin and found the shelter to be empty. Looking back at my first visit, I didn’t even see the cabin – I was tired and overheated and just stayed by the lake where we’d had lunch!

Time to head back. The clouds had built up and were now covering the summits of Garibaldi. The autumn sunshine had melted much of the snow on the large open flank of Diamond Head. The breeze from earlier had dropped and I could see that the lakes were now mirror-calm. I walked around the eastern side to get some reflection shots of the ranger cabin and Garibaldi, then back onto the trail to admire the perfect reflection of the Mamquam range in the upper lake. The deep blue sky and bright clouds looked stunning in reflection, perhaps the most dramatic and still that I’ve seen the lakes. 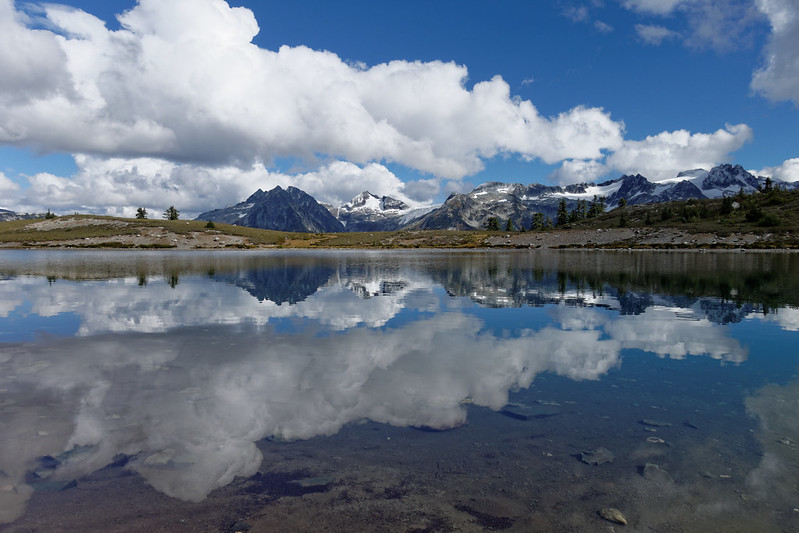 We dragged ourselves back up the hill, looked back at the lakes one last time, and set off back to the car. By now the clouds had rolled some more and without the sunshine, we had to keep moving to stay warm. We had some pretty good conversations on our way back and the distance passed easily. We stayed on the road for our descent into Red Heather meadows, and enjoyed the blaze of colour surrounding us. I was surprised (and a little perturbed) to see that there were virtually no berries left on the bushes. Was that because they’d all been eaten, or was it a bad crop this year? I couldn’t tell.

Soon we were back at Red Heather for one last comfort stop before the last 5 km to the car. I remember this taking forever on our first visit as I was pretty footsore by this time. But now I know the various twists and turns and can judge where we are along the way. Going downhill it’s quite easy to cover the distance in about an hour and a quarter. We stopped again to admire the Chief, and I heard a sound above me. I looked up to see a bald eagle flying at treetop height along the length of the old road, its white head lit up in a little burst of sunshine. Pretty much our only wildlife sighting of the day!

It was only another 15 minutes before we reached the car and an overflowing parking lot! It didn’t feel like we’d met that many people (though we did see more mountain bikers than I’ve ever seen on this trail before), but I guess we must have. Pulling off our boots we piled into the car and headed for home. A superb day out, and a fitting tribute to my first visit to Elfin Lakes. What can I say? The route has really grown on me since 2004.