Opinion:
Having done Black Mountain last week, I can honestly say that Mount Seymour was miles better. On a bluebird day such as this, the views were many and pretty much ever-present. Light winds, friendly faces, and a quiet mid-week trail added up to a superb day out.

Fact
The trail was well established and marked with poles all the way to First Peak so route-finding was not an issue. I noticed the marked winter route now takes a more gradual approach on the final ascent, which was welcome for two reasons: 1) it was less steep than the old route, and 2) it offered up yet more stunning views. I like this new approach.

Snowshoes were not needed as the snow was packed down hard, though it did have a loose grainy surface covering for much of it where boots and snowshoes had churned it up. Microspikes or YakTrax might be useful in places, but as with last week, I was fine in my winter boots. Lots of wind-scoured snow near First Peak which meant variable snow support. Sometimes it was like walking on hard sand, others it was soft powder.

A couple of ravens came to check us out at the peak, but weren’t as bold as those on Black Mountain last week and kept a respectful distance.

This is the third time I’ve headed to the first peak of Seymour with a GPS and each time I’m getting a cumulative elevation gain of around 550 m, which is over 100 m more than would be expected from just looking at the difference between the starting and summit elevations (which is what most books give). Most of this is extra comes from the climb back up to Brockton Point from the bowl below the cliffs on the eastern side of the peak.

While it was quiet on the trail, we did bump into a few organized tours (school groups?) run by the ski resort on our way back. Each group must have been 15-20 people, not all of whom were having fun :-) Watch out for that when hiking mid-week.

Unleashed dogs were out and about, though mostly not an issue – apart from one pug that chose to run at me, bark its head off and try and jump up on me (it was one bark away from getting a boot…). I couldn’t be bothered to roll out my unleashed-dogs speech, so I just ignored it and walked away. Later, we met one dog owner with a firmly leashed dog who admitted that their dog liked to jump up on people, which was why it was leashed – yay for responsible dog owners! 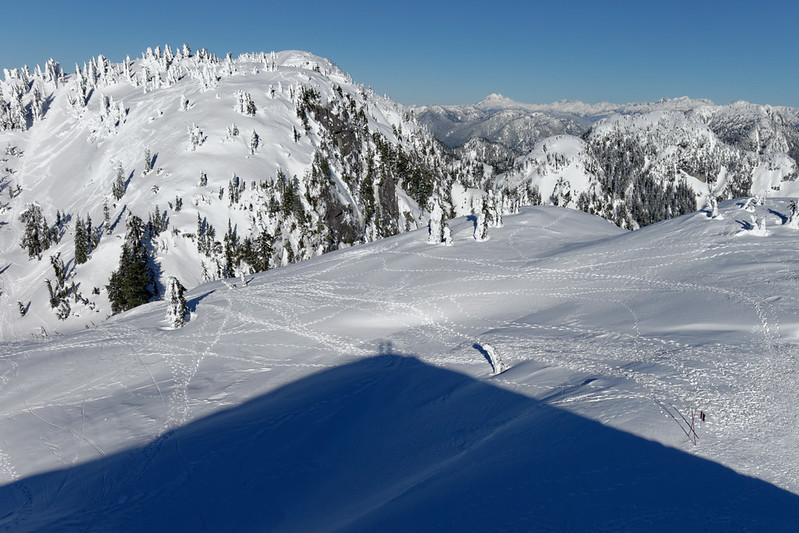 Story
I’m trying to write the story part of this trip a year after the trip itself, and I must confess that I don’t really remember as much about the day as I would like. Score one for writing up trips soon after completing them… The passage of time certainly allows details to drift away, especially when it comes to a trail hiked many times already. How can any one of these trips be distinguished from all the others?

So I return to my photos (and GPS track) to remind me of the story. I met my friend Gloria and drove up to the parking lot on a gorgeous sunny day. As with last week’s trip to Eagle Bluffs, I didn’t bother taking snowshoes – and was right not to. Hitting the trail we made steady progress, eventually pausing to get our first glimpse of a view of the mountains to the west. That view never gets old. 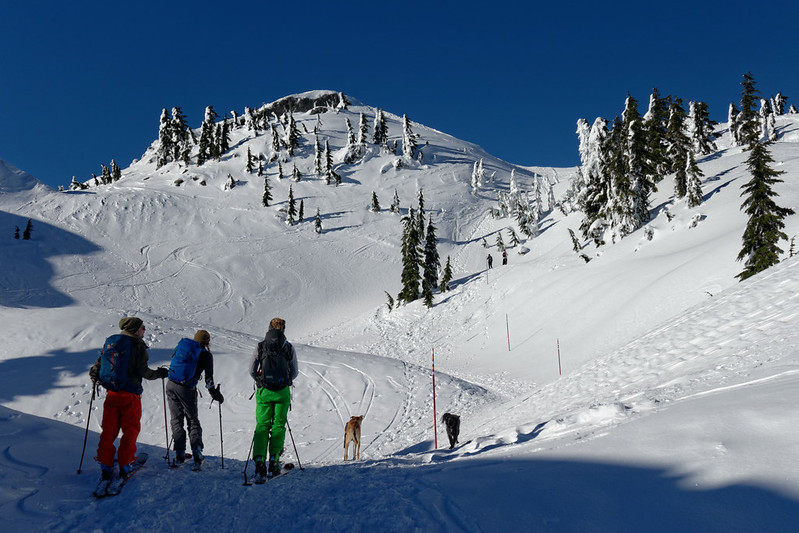 We plodded on up to Brockton Point where we stopped briefly once more to admire the view (and catch our breath). Ahead of us lay the peak: its sight from Brockton Point often causes first-time visitors to wonder (nervously) if the route goes straight up. Of course, plenty of people do take a direct approach if the conditions are right (and usually regardless of whether or not they have the appropriate gear…) but I’ve not yet tried it. I’m more of a hiker than a climber, so I’m quite happy to stick to the trail and meander my way up to the top.

Following the marker poles, we descended off the point before climbing and descending again, soon reaching a small meadow (not that you can tell in the winter) below cliffs on the eastern side of First Peak. A gentle climb greeted us to get to a pass or gulley (depending on your perspective) where we turned steeply up to the left to begin switchbacking up towards the summit. This section always a bit of a slog but it doesn’t last long. The firm snow made travel easy with lots of footsteps to follow.

The trail levelled off as we gained the bowl below the summit, and we were happy to walk out into the sunshine again. I was pleased to see that a new winter route had been put in place to make the ascent a little easier. In previous years, the route went up the steepest part of the exit from the bowl which could be tricky under certain conditions – such as the soft, unconsolidated snow we encountered on my first winter visit to Mount Seymour back in 2005. Descending used to be at least as tricky and was often turned into a slide, which in turn made the ascent even harder etc. Now the route peeled off before reaching that steep section and led us out onto a shoulder with some exceptional views. 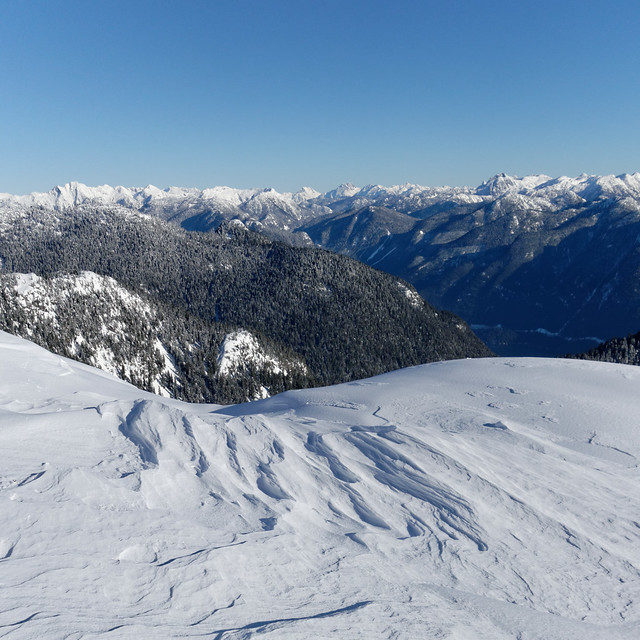 One of the things I particularly like about Mount Seymour in the winter is the alpine feel: with few trees near First Peak, it looks like a more remote location than it is in reality. The downside to that lack of trees is that it is often a very windy place. Thankfully today it wasn’t too bad, but the evidence was all around us at our feet, the snow carved into a multitude of patterns by the howling wind. I could have spent all day taking photographs of these so-called sastrugi formations; they were so picturesque! 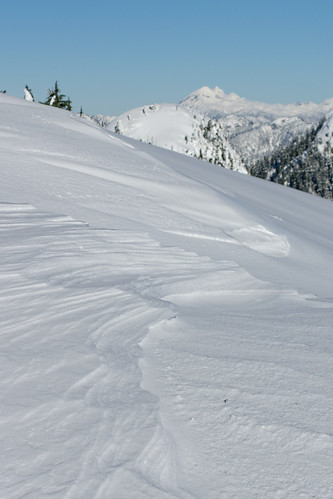 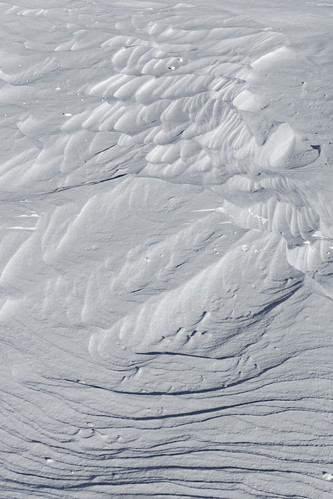 To top it off, the smaller trees made for the most fantastic shapes, encased as they were in a thick layer of frozen snow and rime. It really was a photographer’s dream to be up there. The blue sky and white snow made for effective photos (albeit with slightly blown-out highlights: I was using the small-sensor RX100II), but I have to admit it would have been spectacular at dawn or dusk with the warmer light. 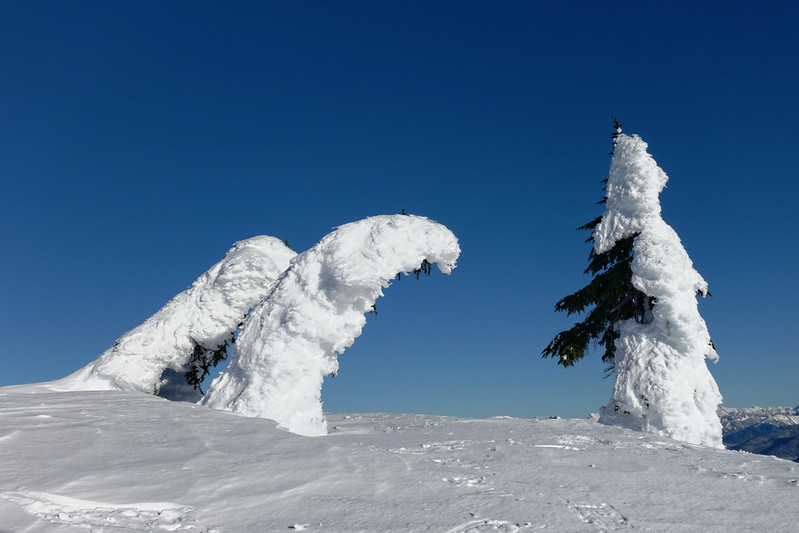 We made the final, dramatic-looking (if photographed from the right angle) ascent to the peak and took in the incredible 360-degree panorama around us. Just beautiful: snow-covered mountains in every direction. We contemplated lunch here, but in the end decided that it was too early and, after we’d exhausted our picture-taking, began our descent.

I wasn’t quite done with taking photos of the snowy trees, nor any other shapes or textures we found on our way down, but it didn’t take us too long to return. The trail was quiet (until we caught up with a couple of tour or school groups) and the hiking was easy. The car had been warmed by the sun and the drive home was lazy.

For a city that gets so much rain (and last October/November was particularly grim), Vancouver seems to get enough of these bluebird days in winter to reboot our memories of those dark grey days. And it’s so worth getting up into the mountains on those days. 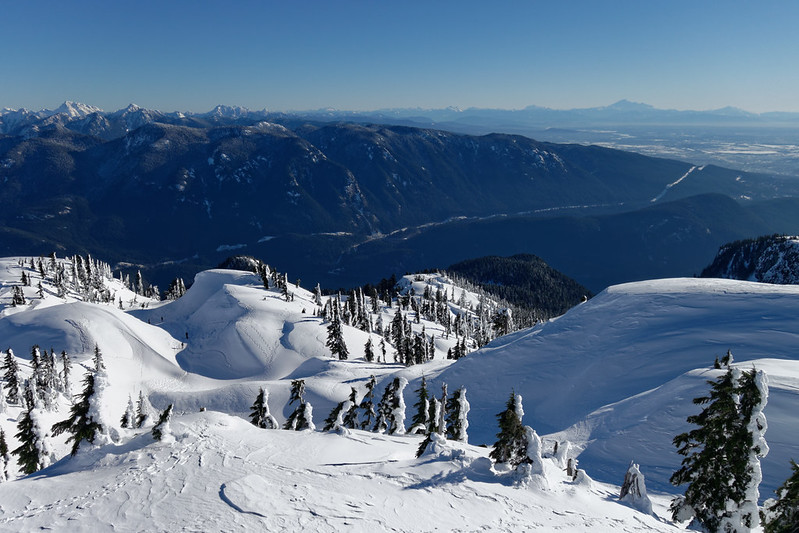