We set out early from Courtenay and drove up the Island Highway towards Campbell River, Daves’ Bakery our destination for breakfast and sandwiches for later. A huge thunderstorm greeted us as we turned off into the town, lightning darting this way and that, with thunder occasionally booming directly overhead. As we pulled up in front of the bakery (having missed it on our first pass) the rain eased off and we went inside.

Back on the road, we refuelled as we passed through the centre of Campbell River before continuing our journey north. We were soon passing the trailhead for the Ripple Rock trail that we’d hiked the day before, entering new territory. The road was quiet, though we were slowed by construction in a few places.

We passed numerous small roadside lakes with rest stops, crossed many creeks and rivers. New mountains came into view – some surprisingly jagged and intimidating – as did the extent of the logging on northern Vancouver Island. Now that was a depressing sight: whole slopes shaved completely clean of forest, leaving behind a sea of dead and downed timber. We quickly named it “moonscape logging”, as that’s exactly what it looked like. The aftermath of Tunguska or Mt St Helens couldn’t have been more devastating to the eye.

Within a few hours we came to Port McNeill and turned in to look for lunch. We ended up enjoying some halibut and chips at the Northern Lights restaurant attached to the Haida Motor Inn. We topped up the fuel tank and continued on our way, and with some excitement (and trepidation) we turned off onto the Cape Scott road.

After a few warmup kilometres of paved road, we were dumped onto the well-groomed gravel. We found it was smooth enough (and the road wide enough) to maintain a steady 50-60 km/h. I slowed down frequently to let speeding pick-up trucks pass – local traffic no doubt. I had no desire to be pushed beyond my comfort zone on this road.

Speaking of which, we came to a junction with a spur road and, although we had priority, I could see a fully-laden logging truck barreling towards us on the spur. We pulled over to let it by – I had no intention of picking a fight with such a truck; the drivers have a reputation for a lack of sympathy towards other traffic. I understand they have a job to do, but driving in such a manner as might lead to an accident with serious consequences for the other vehicle doesn’t win many points with me.

Beyond that point, the road was empty – only a couple more pick-ups needed to get by, and we so only a couple of cars on their way back from Cape Scott. And then we rounded a bend a little too close to the centreline at which point we were facing another logging truck at full speed, taking up pretty much the entire drivable width of the gravel. Well, that was certainly a test of my reactions… Thankfully we stayed on the road and avoided the ditch, though it was close as the gravel at the roadside was much looser. I cursed the driver and then my own complacence before getting on our way.

That was our last encounter of the day. We passed through Holberg (noting the location of the famous Scarlet Ibis pub) and followed the signs to Cape Scott. To our surprise the parking lot was almost full! We pulled in to a spot and set about sorting out our gear.

We dragged our packs onto a picnic bench and oh so sluggishly got them ready for the trip. Groups of tired-looking hikers were a steady stream. One group was being picked up by the North Coast Trail shuttle and they celebrated with photos in front of a banner that proclaimed “I survived the North Coast Trail!” :-)

After what seemed like an age, we were ready to go. We made sure that all our spare food was packed away in the bear-proof container in order to keep the rodents out. I didn’t know if mice could find their way in, but I had to assume that they would. (And we were right to do so: we found a couple of chewed items after we got back!) 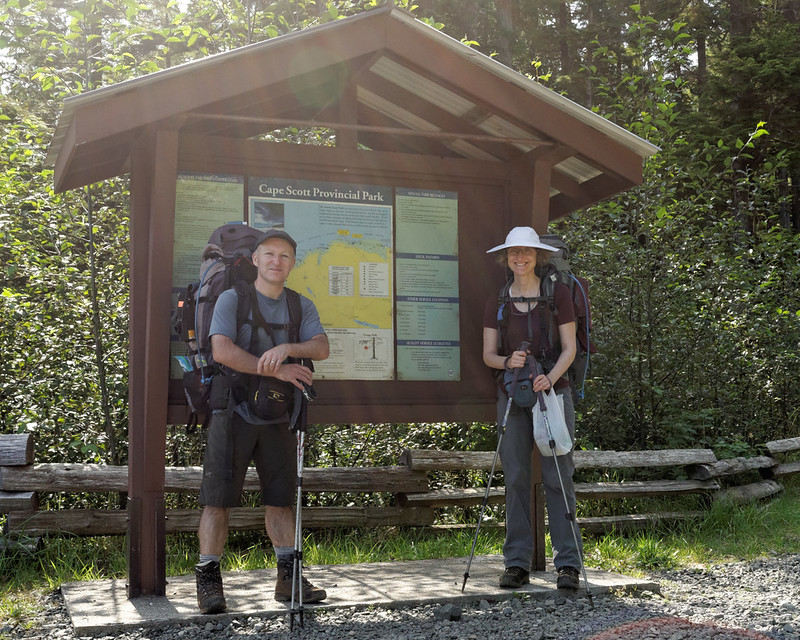 First order of business was a “Before” photo at the trailhead. With clean faces and cheery smiles we set off on the trail – finally, after more than a decade of thinking about being here.

Our destination for the first night was San Josef Bay, a mere 45 minutes from the trailhead, albeit mostly in the opposite direction from Cape Scott itself. The hard-packed gravel path was easy going, which explained the numbers of people we met on their way back having spent the day at the beach. After almost a kilometre, we reached the T-junction and turned left. We descended slightly and passed into more open forest where some enormous cedars lay to our right.

At a sharp bend in the trail we stopped to read a sign, our first, that detailed some of the human history of the area. We ventured off onto the side trail in search of some ruined buildings but found nothing of note. On returning to the trail we noticed some mice perched on foamflower stems, feeding on the tiny seeds. At first I hesitated getting out the camera as I was sure the mice would run off, but to my surprise they stayed exactly where they were, entirely focused on collecting seeds. And so I got my photos! As we moved on, I experimented and nudged the tail of one of them using my hiking pole. It didn’t budge, at least at first. Only with sustained pressure did the mouse move at all, and even then only scampered over to the next flower. 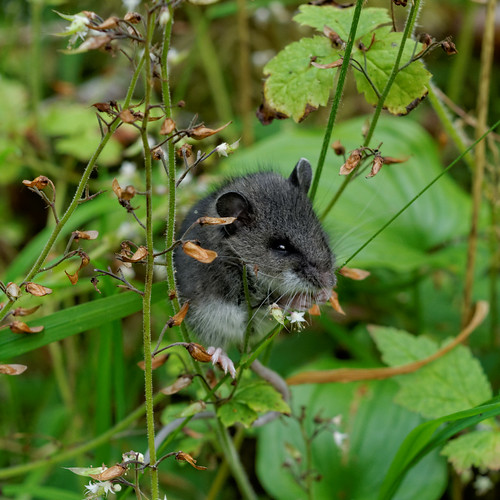 We left the mice alone and continued on our way to the beach. We passed a couple of cedars I recognized from other people’s photos – one of which is actually in a local tourist brochure – big entwined trunks forming spectacular shapes. Naturally, we stopped to take our own photos, though the light was getting dim. Where there weren’t big cedars, we were treated to the sight of huge sitka spruce. And everywhere salal, our familiar companion from the Nootka Trail.

After crossing a couple of extremely unappealing creeks filled with black mud and branches, we emerged onto soft sand to the sound of distant crashing waves. We dropped our packs for a while as we got our bearings and set about looking for a camping spot. A few options looked OK, though the best spots out on the sand itself had frequently been used for camp fires, and we eventually settled on a small clearing at the edge of the forest where we set up our tent. 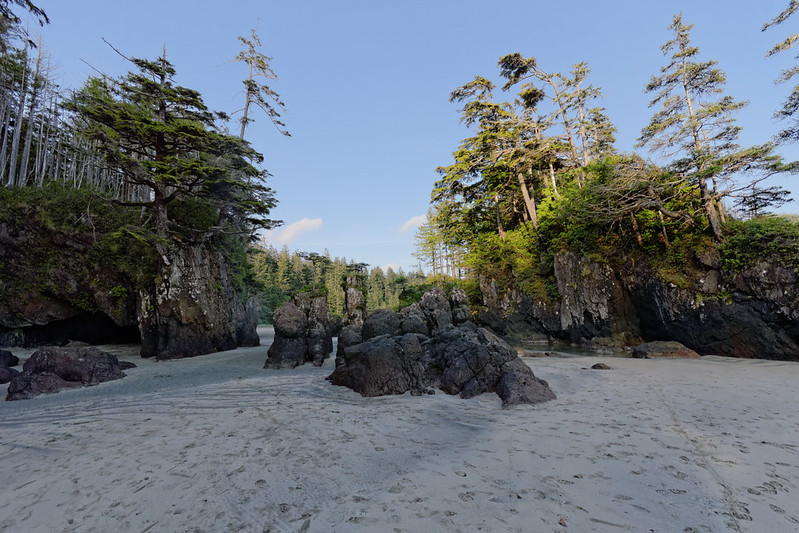 The beach we were on was now in the shade as the sun disappeared around the corner. We headed off to the west beach to find some sunshine where we could enjoy our (enormous) sandwiches. We picked our way through the wonderful maze of sea stacks connecting the two beaches, instantly recognizing a small tree atop one of them from friends’ photos. Alas the stacks were totally in shadow which made it difficult to get good photos (I had the idea of revisiting them in the morning when the sun would be on them – except the next morning wasn’t sunny…). Still, we enjoyed wandering through them and admiring the rock formations.

We emerged in late afternoon sun and found ourselves a patch of sand to sit and eat. Now full of food, we wandered around in the sunshine to explore the beach some more. With the tide low (though coming in) we found bright green anemones galore, barnacles, and mussels on the rocks, more anemones and hermit crabs in shallow tide pools. Some of the barnacles were big enough to fit a finger inside (not that we tried) and where they’d been split looked in profile like enormous teeth. On the sand, we came across a huge beached lion’s mane jellyfish and found sand dollar shells stained brown with the tannins from the peaty water. 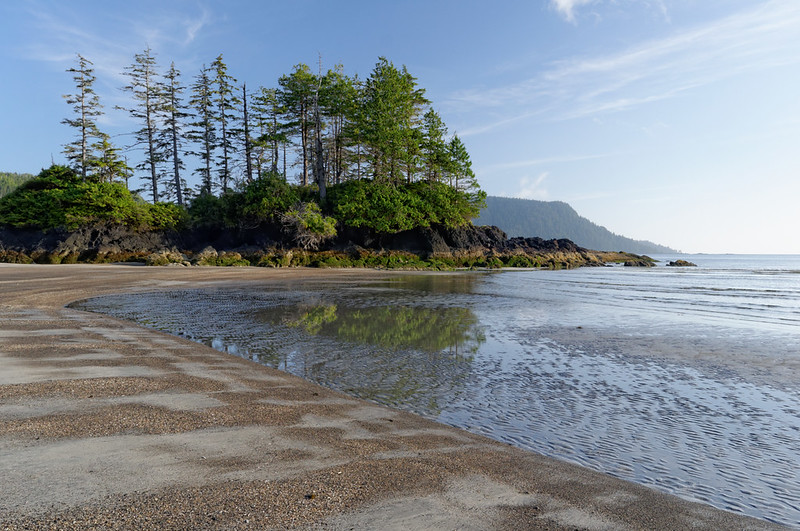 The sun dipped below the trees and we were plunged into shadow once again. We set off further west along the beach in search of the water source. I had heard that water sources could be a bit iffy and when we reached the marker buoys at the end of the beach indicating the water source, I understood why. The creek was a trickle across the sand spilling from a brown stagnant pool, topped with creamy foam. To say it looked unappealing is an understatement. However, we were won over by the gorgeous little double-cascade waterfall spilling over the rocks and filling that pool. It was a picture-perfect little fairy glen. 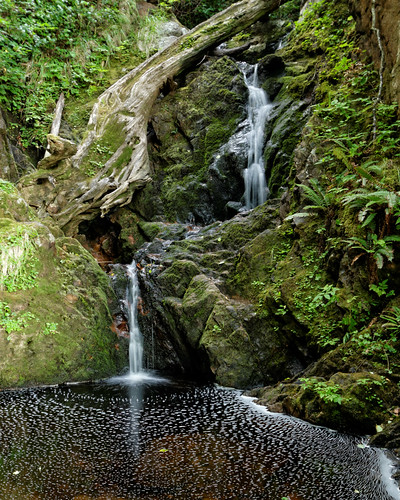 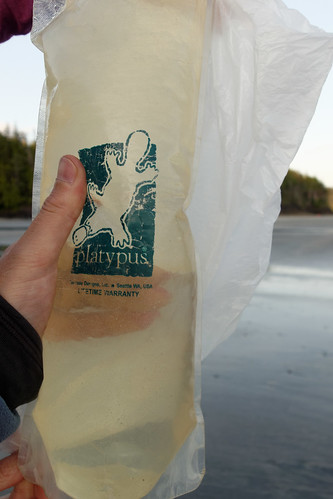 We filled our water bladders from the available running water – trying not to be put off by its colour – and set off back to the tent for the evening. An osprey was circling over the water looking for fish, before flying right overhead. We passed back through the sea stacks in the dimming light and returned to the tent. In the last light of the day another osprey (or maybe the same one as before) appeared only to be chased off by a bald eagle in search of an easy meal.

The western sky turned peach then pink, and we took this as our cue to head into the tent. 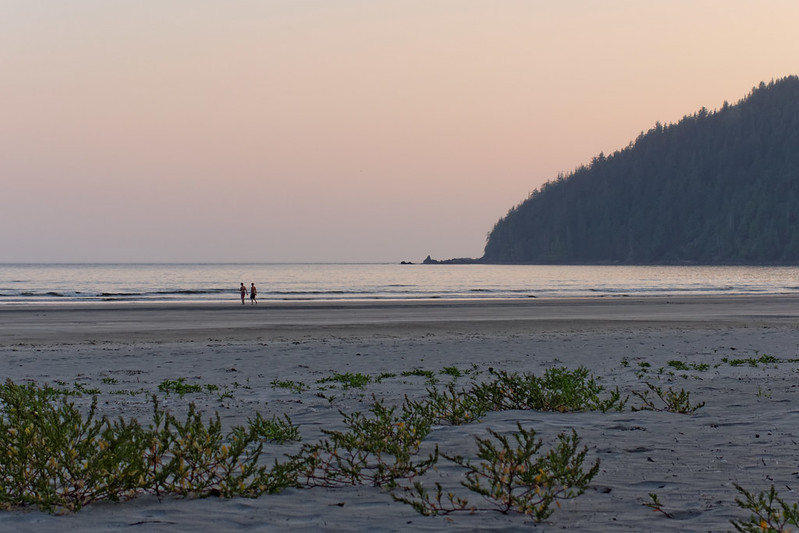 All photos from today