By the quality of the light I could tell that it was brighter. Hoping for sunshine, I unzipped my side of the tent and looked out onto the beach. There was some blue sky out to sea, and our hopes were raised for a fine relaxing day. And then, just as I was contemplating crawling out of my sleeping bag I heard that dreaded sound: pit-pat-pit-pat on the flysheet. Sporadic at first but increasing in frequency to a steady rainfall.

Well so much for that idea. But really, who could complain about being forced to stay in bed for a little while longer? The sand was perfectly comfortable, and we had nowhere to be, seeing as our plan for the day was to chill out and enjoy this beach.

The rain only lasted 20 minutes and once it stopped, we hauled ourselves out into the bright light of day and set about our morning routine. We noticed that quite a few of the tents had gone, leaving our section of the beach empty. We decided against dragging our food bags all the way back down to the tent, so we found a log near the exit from the beach and set up breakfast there. 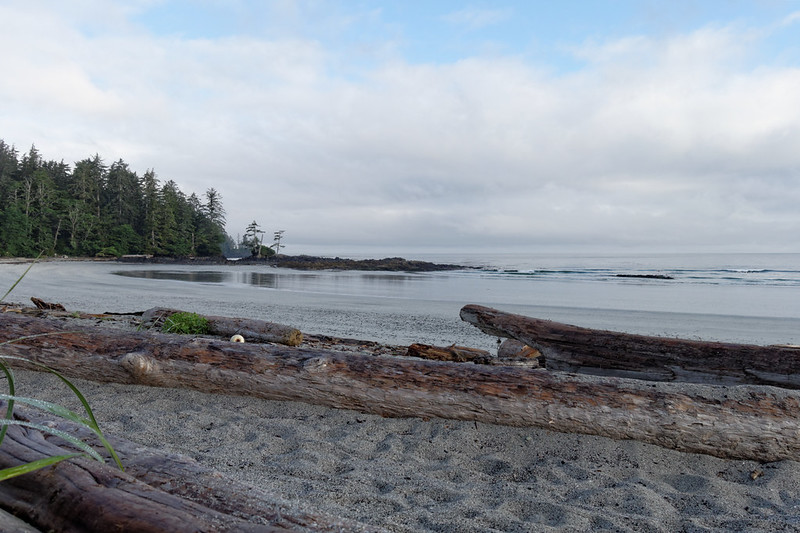 As we sat back with our tea and coffee, a steady stream of exiting backpackers crossed the beach and disappeared into the forest. It felt luxurious to have nowhere to go, and to just be. It gave us time to watch the rhythms of nature around us – the receding and turning tide, the waves and the clouds, the sounds of the forest. Steller’s jays squawked in the trees (and made a passable imitation of an eagle’s cry too), and we heard some cracking noises not far away. “Bear?”, we wondered, but thought no more of it.

Just like at San Josef Bay, an osprey appeared and began fishing the beach. Within seconds of the osprey diving for a fish an unseen bald eagle launched itself from a tree and made a beeline for the poor osprey. This happened several times and though the eagle always left empty-taloned, I can’t help but feel that it reduced the osprey’s chances of catching anything. Eagles are jerks. No wonder Benjamin Franklin didn’t like them. 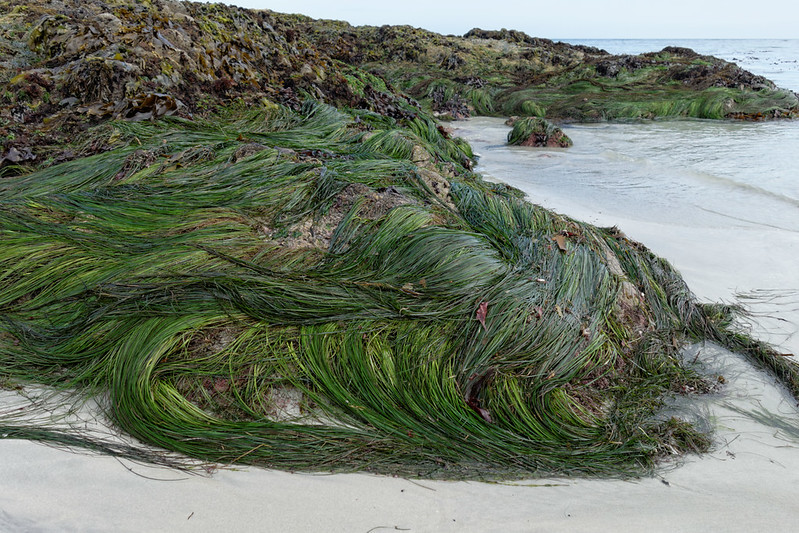 We explored the rocks and tide pools and spent awhile admiring the anemone-decorated rocks, with a few purple and ochre seastars nestled in the cracks. Great swirls of eelgrass lay flat on the sand. A couple of grey falcons sped overhead and landed in a nearby tree for a few moments before flying on. We’re sure they were peregrines, which surprised us.

The clouds were clearing nicely and when the hot sun came it out in full force, we soon retreated to the shade. The water took on the colour of sparkling emerald, and for a moment you could almost believe you were in the tropics with the pale sand beneath your feet.

More hikers were packing up and leaving the beach, leaving us and a family of four camped right by the trail. It was the perfect time to enjoy Nissen Bight as it was too early for the next batch of hikers to arrive, and most of the those making their way back to the trailhead had left. The beach was wonderfully empty, and so, so peaceful. 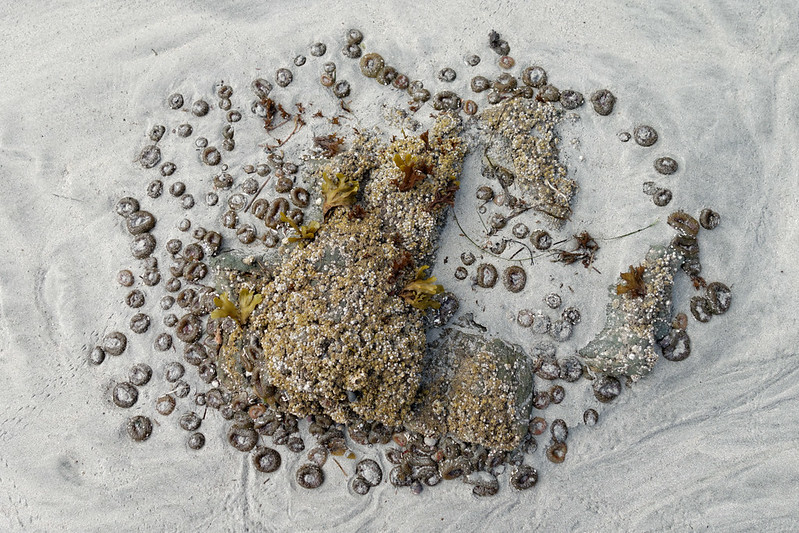 Remember that cracking sound we heard? Well, we found out what it was: a log right next to the metal food cache had been ripped apart by a bear looking for grubs or termites! All less than 10 metres from the beach! The log was gouged out to its core, so the bear clearly had the leisure to work on it. Imagine how startled we and the bear would have been had we ventured back in to the cache or to visit the outhouse! We agreed that was going to count as a bear sighting :-)

We made another cup of tea in our own little slice of paradise – it’s not often you get a beach pretty much to yourself. Pondering our options, Maria casually suggested that rather than hang out here for the rest of the day, we could perhaps pack up and head over to Guise Bay instead, 10 km away. I thought about it and in the end said, “why not?” – after all, we were already feeling pretty relaxed and well rested. And we had plenty of daylight with it only being lunchtime.

With the tent packed away, we hauled our packs back to where we’d had breakfast and had a light lunch. And then we were back on the trail, feeling good. As Maria so perfectly put it: “This must be what it feels like to be a morning person!” Yup – proof that we can be morning people, just as long as morning is 2 pm :-) 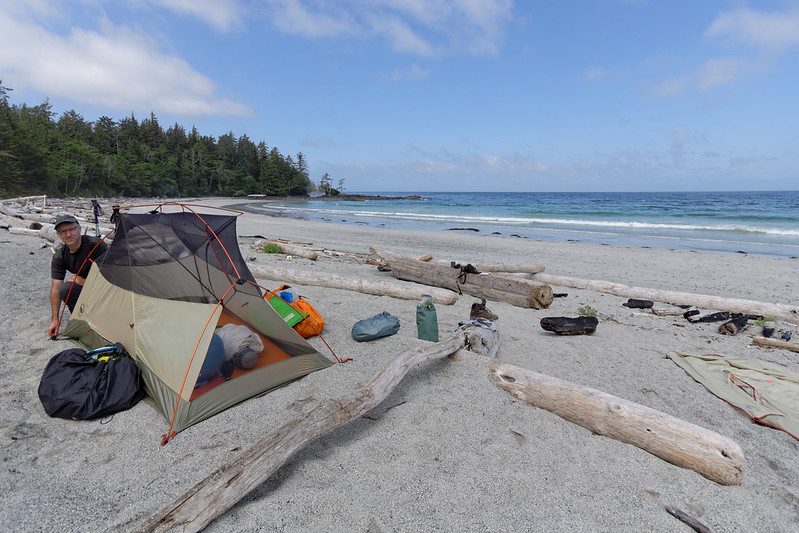 The hike back to the junction passed in no time at all, and felt much easier than on the way in. It was one of the few “muddy” sections, and it really wasn’t that bad, but it was slick. The dense forest around us softened all sounds, and with the exception of a few birds and the distant waves, we hiked in a blissful silence.

We turned right and headed for our next beach, Nels Bight. The trail was easy going, sometimes boardwalk, sometimes an earthen path through the trees. We passed more blue gentian meadows and encountered more of the recent human history. Artefacts from a ruined building lay scattered in the trees to our left. I briefly explored a side trail that looked promising but just led back into another part of the forest. Here we found an old ploughshare, the metal ends of benches, sections of wood, and metal bits and pieces. The nearby signboard told of the community centre and one of the houses.

Maria’s enthusiasm was tempered by a hip problem but we finally worked it out that it was down to the pressure of her hip belt on a nerve near the hip bone. With a bit of readjustment and some bubblewrap, the issue disappeared. The only downside was that now her pack was slightly lopsided, but manageable. At least Maria could now walk pain-free. Yay! 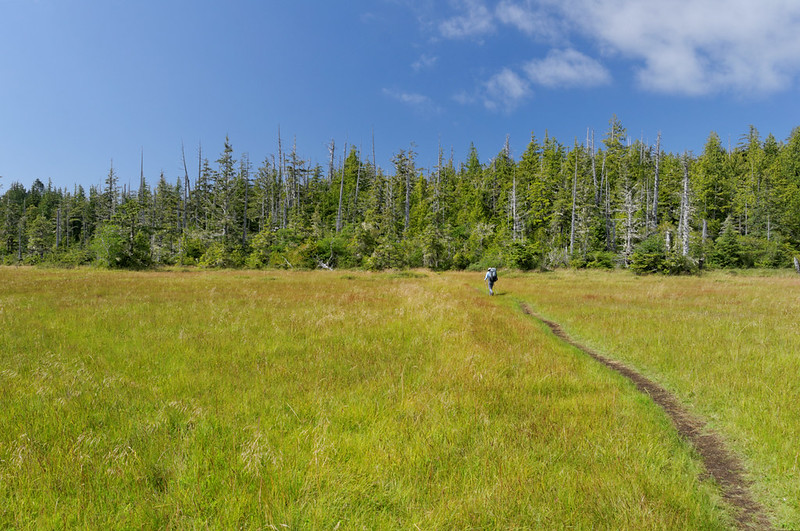 We emerged from the forest to a wide open grassy pasture – a good old-fashioned hay field, complete with lines of weathered fence pots. We chatted with a couple resting by a park sign, and remarked on how it felt like we were on the prairies rather than on the coast. Moving on, we crossed a small wooden bridge and plunged into the forest once again.

A couple of kilometres later we reached Nels Bight and walked out onto soft sand bathed in glorious sunshine. This was definitely the popular place to be with tents pitched all along the beach. We found an unoccupied log and sat down for a snack break and watched the waves break on the flat sand. 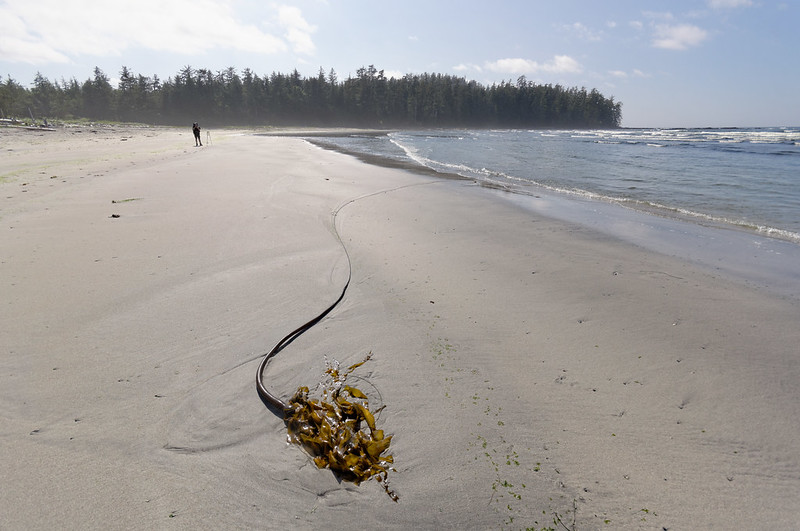 Setting off again, we walked down to the water’s edge and followed it along to the end of the beach. This was beautiful hiking, backpacking at its best. Despite the number of tents, the beach was big enough for us to feel like we had the place to ourselves. Reaching the end of the beach, we crossed the creek on a couple of logs and found ourselves among piles and piles of stinking seaweed with no sign of where we picked up the trail again. We noticed a sign and some floats in the trees, and walked gingerly through the rotting seaweed towards the forest.

We re-entered the trees, stopped in a clearing and looked around for clues as to where to go next. A boardwalk led to the creek in one direction and an outhouse in the other. Feeling somewhat confused, we walked back out onto the beach and looked around – at which point we noticed an arrow pointing further on down the beach. Aha! Back on track again, we enjoyed the next few kilometres walking through a wonderful forest, the sounds of the sea crashing against the rocks in our ears.

Within 40 minutes we came to the next beach, Experiment Bight. And what a beach! Yet another open expanse of glorious white sand and sparkling blue sea. We hiked along the tide line enjoying the glorious afternoon sunshine, pausing at the end to grab another snack. I wandered back up the beach a short distance for a comfort stop – and noticed an eagle watching me from the tree above me, which was a little disconcerting knowing how good their vision is :-) 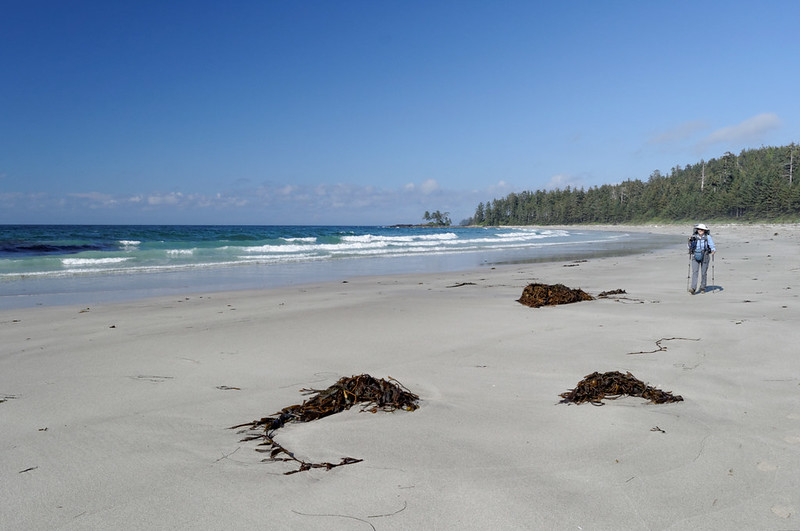 We crossed a small headland in the trees, emerged briefly on a pebbly beach, and followed the trail back into the forest for the final kilometre to Guise Bay. The trail bed was a remnant plank road built during WW2, which made for easy hiking although not all the planks were attached at both ends! I was surprised at how well preserved they were.

For the first time we began to feel a little cagey about bears. The trail was enclosed with dense salal and young trees on either side, it was late afternoon and quiet, plus we noticed several places where bears had been digging up skunk cabbage roots. We half-heartedly made a bit of noise to make sure we wouldn’t surprise anything. Soon enough we heard the sound of the ocean again and passed through a grassy section before emerging onto the sand again at Guise Bay. 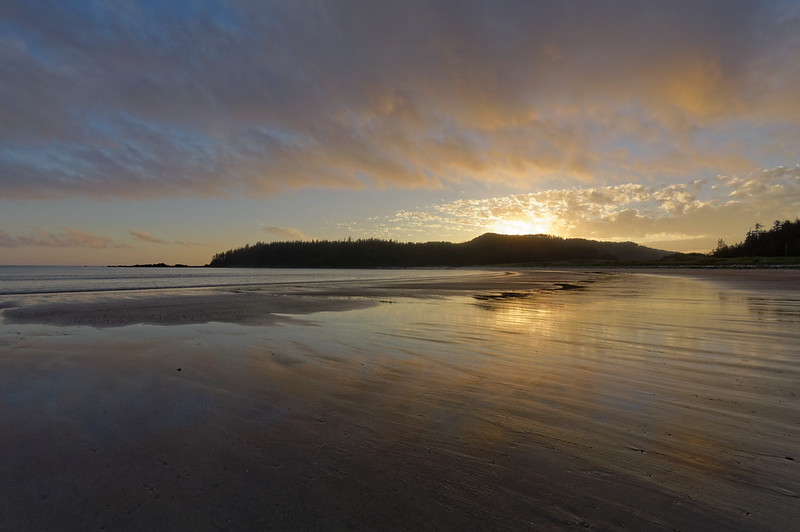 After the array of tents at Nissen and Nels Bights, it was a surprise to see such a deserted beach. We turned left and walked along the logs to find a suitable spot to set up home for the next couple of nights. The afternoon sun was glorious, the distant waves a soothing background, and we stretched out on the sand with our dinner and a cup of tea, tired but surrounded by beauty and very glad we’d made our move.

We wandered the beach in the evening light, and chatted with a few of our fellow campers. They’d just finished the North Coast Trail and were spending their last night at Guise Bay before returning to the trailhead.

All photos from today (lots!)