Ten hours later we decided to crawl out of the tent. That’s right: we spent a whole ten hours – nearly half a day! – curled up in our sleeping bags on a sandy beach. And it was bliss! A wonderfully comfortable night. But you know how things are, and the call of nature eventually becomes too great to ignore.

Clouds hovered above us, with hints of breaks here and there to keep us ever hopeful of a sunny day. We sat at our appointed eating spot and enjoyed a peaceful leisurely breakfast. The group who’d just finished the North Coast Trail had got up early and headed out to the lighthouse at Cape Scott, which gave them chance to fill their water bottles for the hike out. They kindly offered us the water they’d painstakingly collected from the tiny running creek that was the official water source on the beach, and we accepted gladly, using it for cooking and cleaning (it was treated but not filtered).

We wished them a good hike out, and after they left, we had the whole beach to ourselves. Our morning exploration turned up some sand dollar shells, and I couldn’t resist making a collection near our tent. 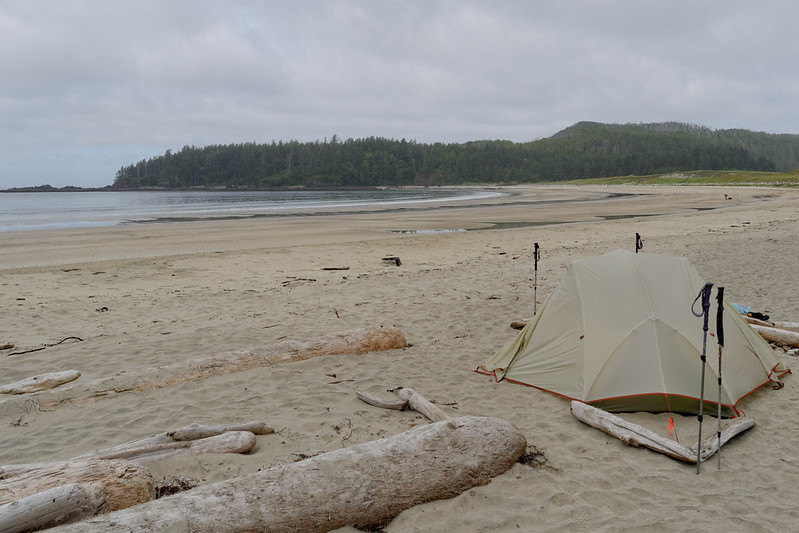 As noon approached, we decided it was time to make a move, and so we gathered all of our empty water containers (totalling some 10 litres!) and walked off with featherweight packs in the direction of the cape and its lighthouse. We walked the firm sand below the high tide line and found more sand dollar shells. We arranged them in a square, with the intention of finding them again later after the tide had turned. (Spoiler alert: we did :-)

Near the end of the beach, the trail headed across the logs and onto a grassy sand dune which soon led into the forest. Our route was the old plank road to the lighthouse, and it was easy walking. Like yesterday, many of the planks were still in place and yesterday’s experience had taught us to be wary of placing all our faith in them! We passed a trail marked with floats and a life-ring which we thought led down to the sea-stack beach we’d been told was not to be missed. Something to check out on the way back.

Walking through the forest we noticed a few “trees” that didn’t quite look like the others. Casting our gaze upwards we saw the cross piece at the top: we’d found the old telegraph poles. In one section we could follow them for quite some time, and many were even still standing upright.

It didn’t take too long to reach the lighthouse. A short uphill stretch of gravel road led us past an amazing treehouse (literally, a small house between two tall trees!) to the red and white buildings of the Cape Scott lighthouse station, where we dropped our packs at a picnic bench painted with the Canadian flag. We chatted with one of the lighthouse keepers (Todd) for a bit and he told us to help ourselves to the water around the far side of one of the buildings. Before we set out, we’d checked the weather forecast and Todd told us that it hadn’t changed: we should be staying dry (a rarity at this end of Vancouver Island). 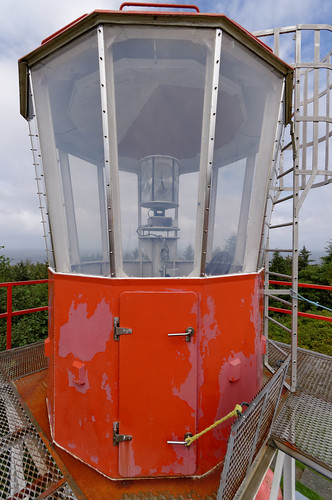 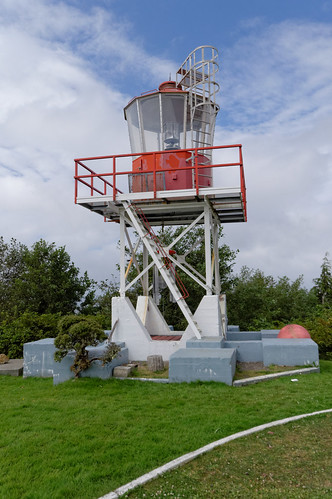 The lighthouse itself was surprisingly squat, basically a rotating light in a housing supported by steel legs. Not much of a lighthouse if you ask me (especially after seeing the enclosed structures of the lights at Yuquot and Carmanah Point), but I guess it serves its purpose. Perhaps a bigger disappointment was that there was no views to be had: the light-station was surrounded by dense salal. An old trail led into the bushes but looked far too overgrown to be followed. And apparently that was intentional: the Federal government decided that it was too risky to allow the public to walk down to the rocks of Cape Scott, and so they more or less closed the trail. I understand the liability issues, but it was a bit of a let-down to get to the cape and not be able to stand there and look out to sea. (It reminded me of hiking the Cornish coast where you’d hike open cliff-tops only to reach an impenetrable thicket of gorse at the point when you wanted to admire a particular view…) 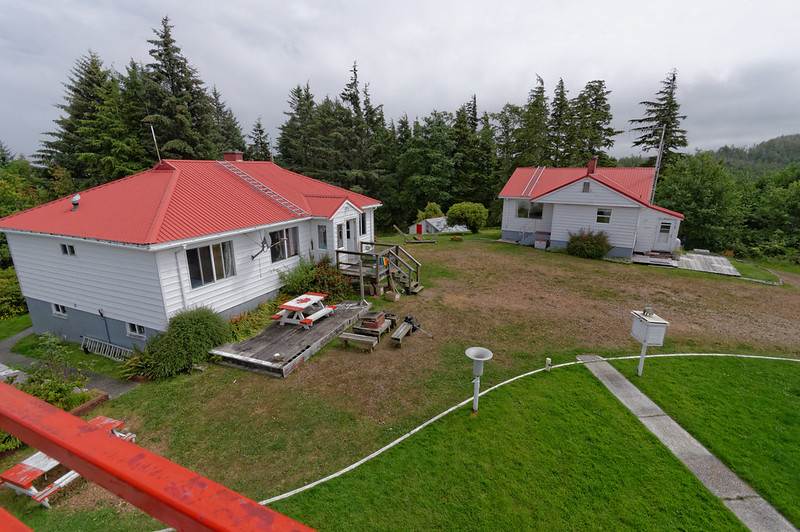 That didn’t stop us exploring the lighthouse and getting what views we could. It was just high enough to see the Scott Islands some 10 km away. Below the lighthouse, a giant wind-chime had been constructed using leftover aluminium bars hung from a life-ring. We could not see any helipad for re-supply purposes, and it turns out that supplies are actually winched in from a ship, which must be tricky at many times of the year.

Descending from the lighthouse, we claimed our picnic bench and enjoyed our lunch of dehydrated hummus and our remaining mini-cucumbers. Quite luxurious! A few groups began to arrive, and I recognized one of the members of one group, Andrew W., whom I’d met through Wanderung. They’d just done the North Coast Trail and he told us of their medical evacuation story – one of the hikers in their group had slipped on a log and cut their leg really badly. Fortunately, with a first-aid trainer in the group they could get her patched up, and with the two-way messaging capabilities of the InReach beacon, they managed to get her evacuated within five hours. Incredible really, considering how remote we are at this end of Vancouver Island. 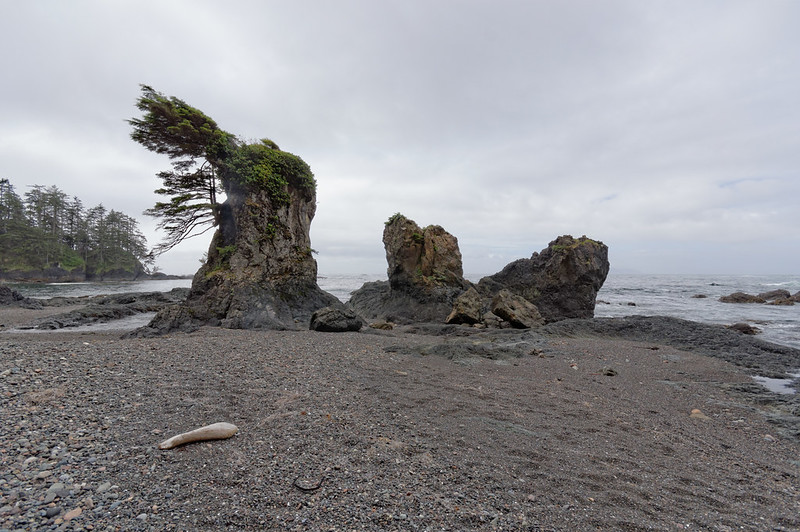 With thoughts of being extra careful in mind, we said our goodbyes and headed back to our beach. On our way back we took a side trail (initially for a comfort stop) that led to a lovely gravel beach with a couple of photogenic sea stacks. We met another couple there and exchanged the usual hikers’ pleasantries. (As it turns out, we’d meet them again on our next trip in Strathcona a few days later!)

We rejoined the trail and continued our wander back “home”. When we reached the float-marked side trail, we decided to follow it down to the beach again. The trail was not as simple to follow as you might think. Sure, in places it was an obvious foot-bed and/or clearing through the salal, but in others the presence of markers was very welcome. 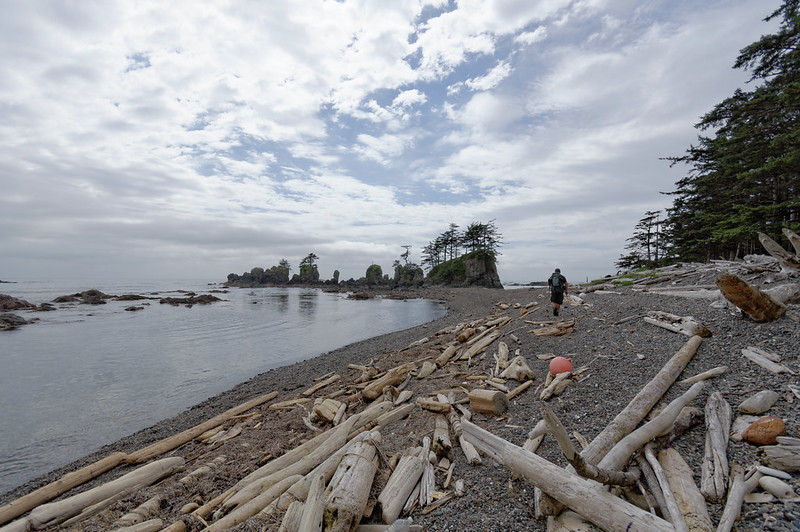 Stepping over a final log or two, we emerged onto another gravelly beach and its line of eight or nine little sea stacks. I’ll be honest: they were smaller than I expected. In my mind I think I imagined them to be like the giant stacks of the Scottish coast, such as the 130-metre high Old Man of Hoy. Instead, we had a handful of rocks 5-10 metres high, some with trees taller than the rocks themselves. Still interesting, but not as grand as I had imagined. Besides, it certainly didn’t stop us taking our time and exploring the beach (littered with all sorts of detritus from ships) and checking out the stacks. We had the place to ourselves, and with the water being a flat calm, it was an exceptionally peaceful time. I think we needed this more relaxed day, as we were feeling tired by the previous couple of days’ efforts. 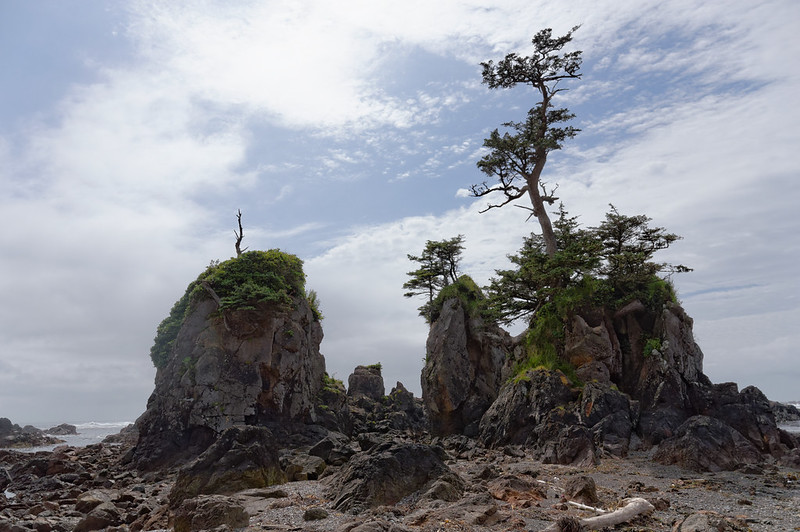 We wound our way back to the main trail, where we immediately bumped into Andrew’s group again. We walked with them and chatted for a while, wandering over the grassy dunes to their northern edge and admiring the breaking waves in Experiment Bight. A cool breeze had sprung up, and the sky was looking distinctly greyer than before. We made our way back into Guise Bay, walking a gap between the dunes which looked like it gets inundated in the winter storms, which must cut off the cape at least for a short while. The sand was compressed and layered, and we found countless snail shells – a curious place for snails! 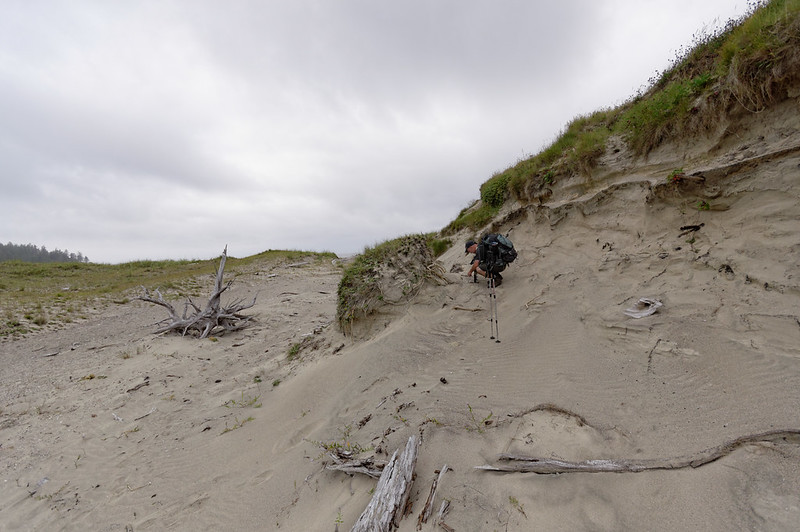 Waving goodbye for real this time, we walked back along the beach to our tent while Andrew’s group returned to Nels Bight before their big hike out tomorrow.

Against the odds, the sky brightened and the sun appeared at the right time for us to enjoy dinner followed by an end-to-end walk of Guise Bay as the tide went out. We found more sand dollars, including a perfect tiny specimen the size of a Loonie, and other pretty shells. Some of the shallow tide pools had mats of what looked like small bits of wood or seaweed. A closer look revealed they they were in fact masses of sea creatures, some kind of long crustacean with a pair of antennae at one end. It looked like they were in the throes of reproducing – some had different markings and appeared to be larger than the others, and they seemed to be the focus of attention. I have no idea what they are, but I took a few photos (and even a video clip) for posterity. 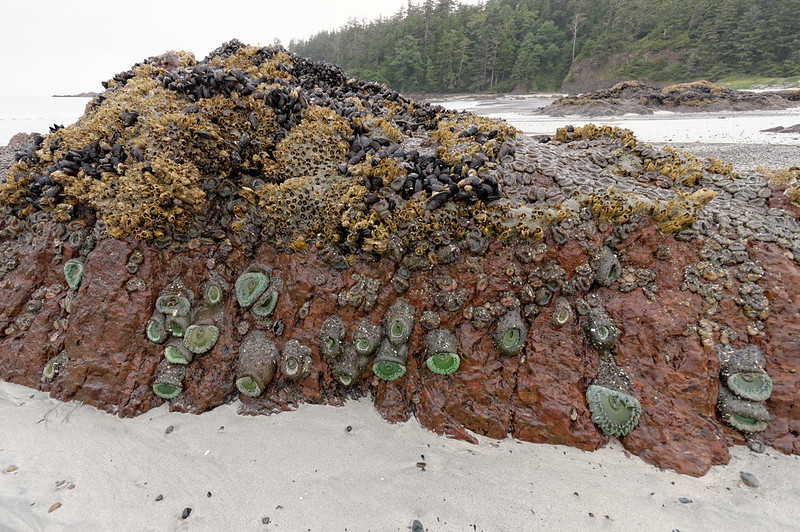 The lowering tide revealed countless sea anemones on the rocks. Some were huge, the size of a tennis ball, and sagged like, well saggy gelatinous things, without the water to support them. Kinda gross-looking. We turned our attention back to the other anemones, some partly buried in the sand, some still open and feeding in pools of seawater trapped next to the rocks. Eventually the sand ran out and we were halted by cliffs. As we walked back to the tent, the sun burst through the clouds and lit up the beach in gold for just a few glorious minutes. 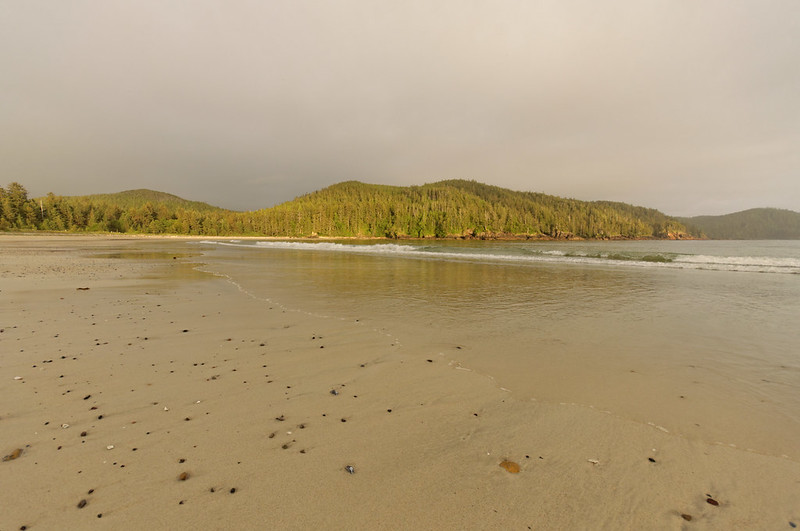 And as quickly as it had come, the sun went once more and the grey clouds returned. This time they bore a little rain, and we took that as our cue to return to the comfort of the tent, where we sipped on some single malt whisky before settling down for the night. It was 9:15 pm. A delicious way to end the day.

All the photos from today