A different approach to Hollyburn: I took the usual trail to the Baden-Powell junction, then followed the B-P to the Old Strachan trail and took that to the Strachan-Hollyburn col, then up steeply to the summit of Hollyburn and back down the usual route. I thoroughly enjoyed it, and saw no-one on the Old Strachan trail (and very few people overall). Hiking alone, I treated this as more of a workout than usual, taking just under 3 hours car-to-car.

Note this circuit is longer than the usual Hollyburn hike, and involves a little bit more elevation gain. But while there is a trail present at all times, novice hikers will probably find it tricky: there’s a couple of spots where you can’t quite see where to go next, which could be disconcerting to be in the middle of all that forest with no sign of which direction to head. And the approach on the north side of Hollyburn is extremely steep in places (it reminded me of the climb out of Crown Pass at times).

The trail was dry throughout with a few easily-avoidable snow patches lingering on the north side of Hollyburn. The Old Strachan trail is lovely, but there are quite a few fallen trees to cross and they sometimes obscure the trail. If in doubt, look for flagging: you’ll find a clear trailbed underneath. The damaged bridge on the B-P trail can be avoided easily as water levels are really low. The trail up the north face of Hollyburn is very steep in places but is actually quite easy to follow. There’s a fallen tree that invites a detour but don’t take it: cross the tree and regain the trail. Beware of a couple of false summits along the way – it’s not that easy! :-)

Bugs were non-existent at the trailhead but by the time I hit the Baden-Powell trail they were insistent. Not too much of an issue while I was moving (and when there was a breeze) but as soon as I stopped they were on me. I did have to spit out a few… Mostly black flies but a few mosquitoes too. I came home with perhaps a dozen new bites which is tolerable for me. Lots of cobwebs along the Old Strachan trail – testament to how little it’s used!

Flowers: cottongrass, deer cabbage, pink heather, white heather, some white rhododendron, copperbush (glowing beautifully in the sunshine), foamflower, creeping raspberry, lots of fireweed, a few lupines and arnica, some hellebore and valerian. Lots of Queen’s cup leaves but no flowers, and some had green beads (which will ripen to dark blue later).

Blueberries are starting to ripen – the few I tasted were delicious. However, remember to leave most of them for the wildlife (harvesting is illegal in provincial parks).

Wildlife: see above for bugs. Whisky jacks at the summit, including some of this year’s brood being taught how to scavenge food from humans (sigh). I also heard chickadees, juncos, and flickers. At the summit there was a family of woodpeckers high in the tree tops, and I’m sure I heard an owl as I climbed up towards the Strachan-Hollyburn col. There was a single, lone salamander in one of the tarns on the south side of Hollyburn. 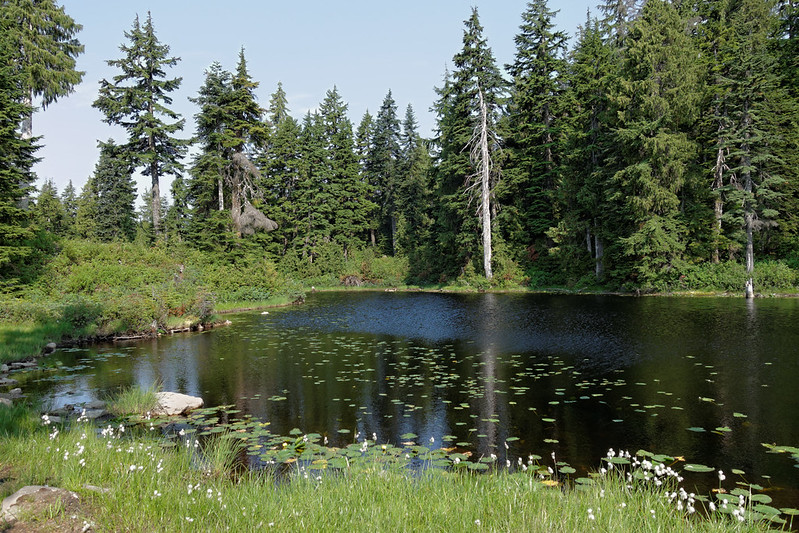 A different approach to my story. I’ve often wanted to try live-tweeting a hike, but I’m not that good at composing on the fly, preferring to make notes and edit later. Instead, consider this story to be a sequence of tweets!

Nice and cool at Hollyburn trailhead and no bugs. Filming at Hollyburn Lodge. Shall I go see? No – prefer to just hike main trail.

Backlit fireweed buzzing with bees. How is it they know I’m about to take a photo and move on? 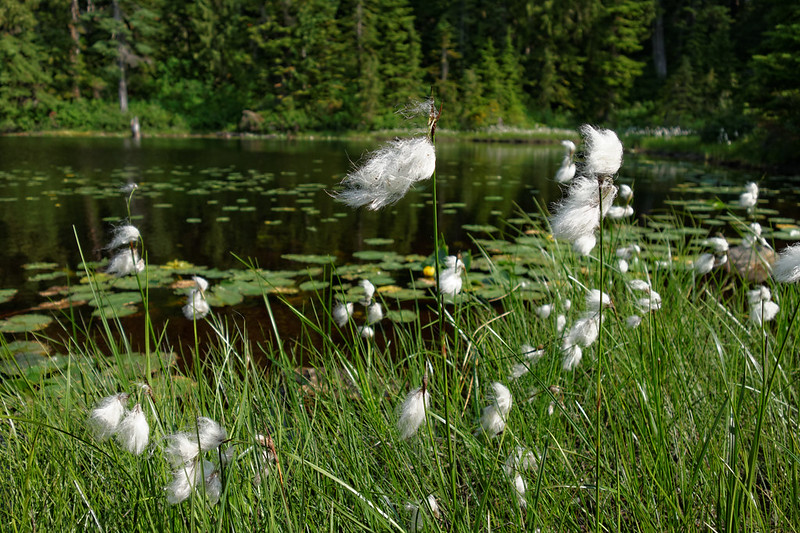 No cell service beyond warming hut but tasty blueberries. Easy and dry hiking to Baden-Powell junction.

Where next? Off the log, into the bushes marked with pink tape, and across a slab of white granite.

Trail bushy but definitely there and just enough flagging.

Downside to solo hiking – no one else to do cobweb duty! And so many cobwebs!

Old Strachan trail not much used, trailbed soft with needles and hemlock cones. Did I mention the cobwebs? 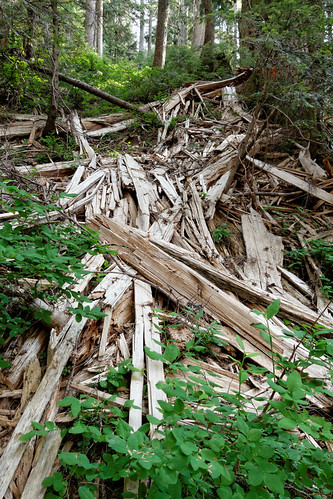 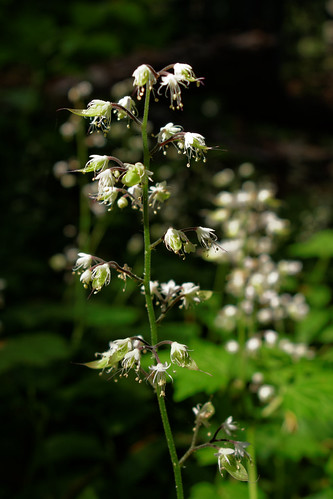 The forest is near silent apart from the crackle of twigs underfoot and occasional chatter of Douglas squirrels.

Plenty of fallen trees to negotiate but no major issues. Some exploded on falling. Must have been quite the sight.

Bugs definitely making an appearance now… Have to spit out a few. Take off glasses to avoid swiping them into the bushes!

Cool breeze keeps bugs at bay but they’re bad when it stops. Getting in eyes and ears.

Now surrounded by mountain hemlock, soft needles pointing in all directions. Always liked this part of the trail. 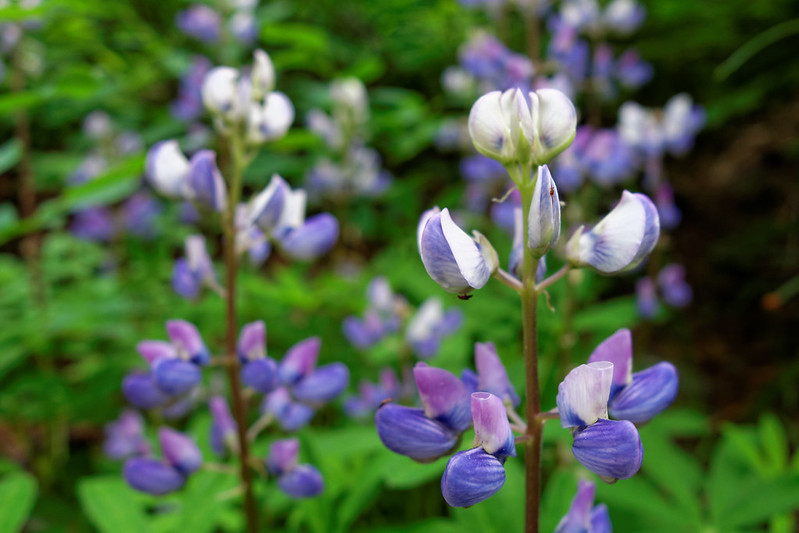 Snow patch at col; Hollyburn looks steep from here (taken 1.5 hours so far). Clear trail leads off up the slope.

Up, up, up then unexpected drop into small meadow, another patch of snow. Some arnica and lupines; clamber over big fallen tree.

More up but – oops – not done yet… Another false summit! You could say it called my bluff… 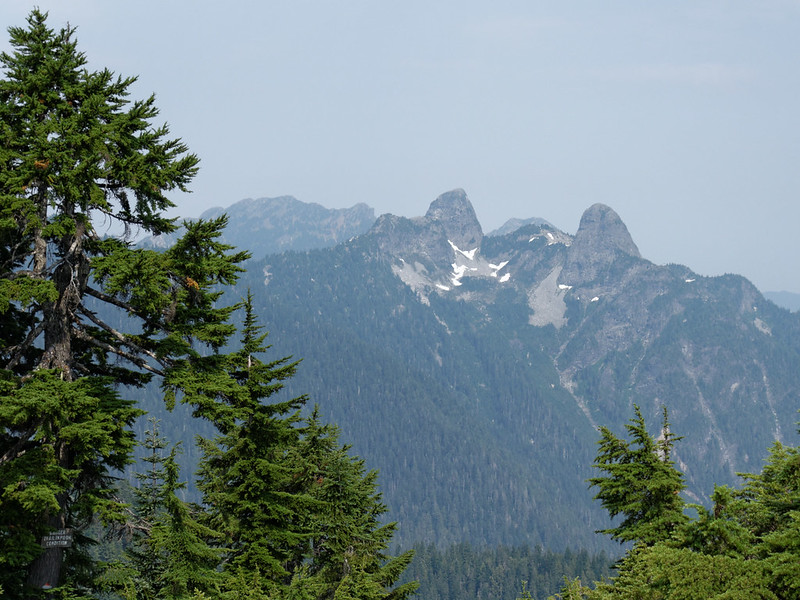 Hazy view of Brunswick and the Lions; Sky Pilot barely visible; no sign of Garibaldi. Cathedral and Crown look majestic.

Just one salamander in a tarn (unlike Mystery Lake last weekend which had loads). 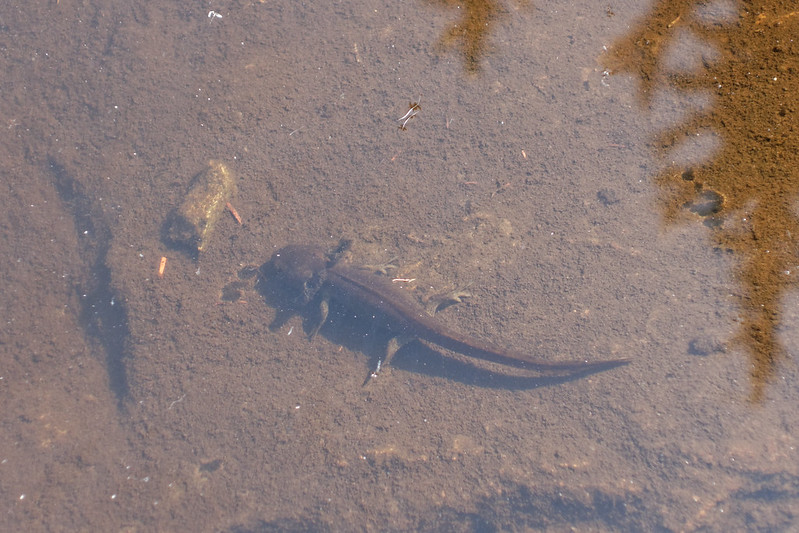 Meet more folks as I head back down including a few ursine campanologists. Usual assortment of unleashed dogs, some would make good cougar snacks.

Back at BP junction, no cell service. Back through the berry bushes, then down the ankle-rolling cobbles.

WTF? Did I just see someone carrying a cut tree? Can hear a small power tool, hedge trimmer? Called park operator. Hope they caught them. :-/

Crazy Raven beer to finish the trip. A good hike to do, and a good day to do it.