A pleasant and easy little walk in the alpine for sure, albeit not necessarily exciting (and the microwave towers are a bit of an eyesore). The flowers definitely contribute significantly to the enjoyment of this walk, so try and time it as soon after the gravel road opens as possible. It’s tricky to catch this trail at the right time for glacier lilies as there’s only a narrow window between when the road opens and the bloom dies off. But this year, we made it! Yay!

The gravel road was only open as far as the lower parking lot at Blackwall Peak – the road to the upper parking lot was still closed due to snow – but that worked out just fine as it encouraged us to complete the entire loop. Had we started near the upper parking lot, we might not have bothered with the loop! In fact, I’d recommend parking at the lower lot just to make completing the loop more likely.

Starting by the outhouse at the lower parking lot, the right-hand leg of the loop (going anti-clockwise) offered the best bet in terms of more flowers/less snow. The upper portion of the trail was still mostly snow covered, and the snow was soft and slushy so expect to get wet/cold feet without boots and gaiters! Plus route-finding could become an issue, and it would be a bad thing to end up tramping all over the meadows.

I was pleased to see lots of glacier lilies and western anemone (along with the diminutive spring beauty) either in bloom or just emerging as the snow melted. My guess is that a week or so later than our visit would have been perfect, and it would have given the snow more time to melt so the trail would be easier to follow.

On a clear day, the views are quite lovely from up here: today was cool and drizzly, so we could barely see a couple of hundred metres! No matter as the objects of our attention were at our feet :-)

In addition, there were many flowers blooming along the paved portion of the road up to Cascade Lookout – there are a couple of pullouts along the way that we made good use of to get close-up views of paintbrush, lupine, and penstemon. 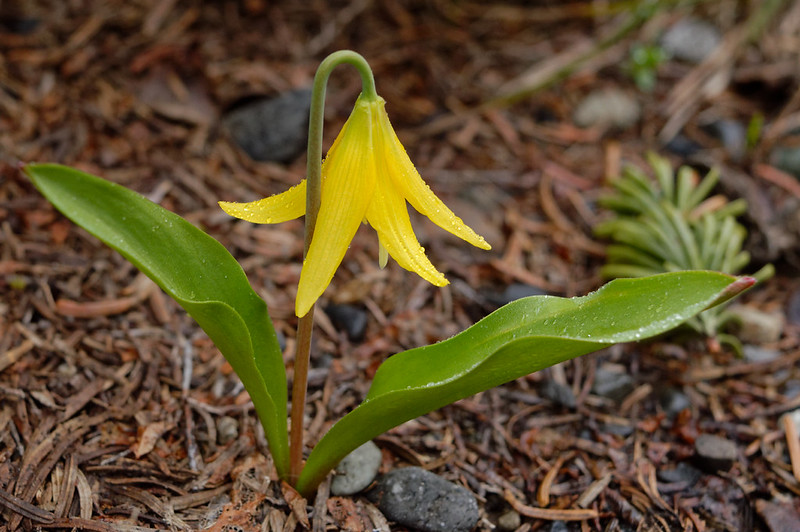 I’ve always loved the idea of this trail, but have never been here at a convenient time to catch my favourite flowers, glacier lilies. In addition, we’re usually setting off on the Heather Trail, which makes walking in a circle a bit pointless before setting off on a major hike!

But today we had no plans other than to try and see (and, in my case, photograph) as many flowers as possible. The glacier lilies and western anemone were at the beginning of their peak bloom and for a moment I considered returning a week later to check on their progress. Maybe I’ll save that for a retirement project…

It was a cool and misty/drizzly day with limited visibility, perfect for flower spotting! After yesterday’s hard work to earn our glacier lily sightings, I was astonished to see them growing at the roadside along the gravel section! Not many, but they were definitely present, so all I wanted to do was see at least a few glacier lilies, then I could have just driven up the road. But I know myself better than that :-)

As we rounded a bend not too far from the parking lot, we saw a couple of black shapes darting across the road: it was a pair of yearling bear cubs no doubt following their mother off into the trees. What a way to start the day! We were so delighted to see that. A short time later we saw a marmot perched on a rock on the downslope side of the road. We had just enough time to say “marmot” before it scampered off.

The low cloud also kept the crowds away and we pulled up in the parking lot alongside only one other car. Immediately in front of us was a small patch of ground completely carpeted in emerging glacier lilies. None had fully bloomed yet, so it was a unique sight. A few more cars pulled in for varying lengths of time, and as we set off, we shared the trail with only a few people, most of whom turned back as soon as they encountered snow.

The nice thing about the flowers is that there were plenty right next to the trail so there is no need to step onto the meadows. By far the most common were glacier lilies, but fuzzy western anemones were also plentiful and spring beauty popped up here and there. Hermit thrushes were singing away in the tree tops, their distinctive ascending whistling song echoing around the meadow. 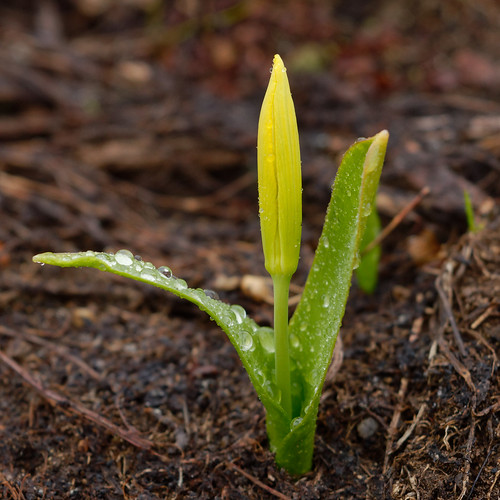 The first patch of snow was finite in size: we could see the trail emerging from the other side. Despite not really being dressed for it (we had runners on, not our boots) we plodded on through following footsteps where possible. Further on the snow became continuous and we relied entirely on the earlier passage of other hikers. Here and there we postholed up to our knees which wasn’t much fun – serves us right for not dressing appropriately! As we reached the high point, the transmission towers shrouded in the mist, we turned directly across the snow-covered meadows to pick up the return portion of the trail.

Gradually the ratio of exposed trail-to-snow increased as we got closer to the car, which we reached about an hour after setting off. We had cold damp feet and were feeling distinctly chilly, but we’d enjoyed the wander. I was delighted to have seen the first flush of glacier lilies: it always sets me up for the hiking season to come.

As we drove back down out of the clouds, we pulled off the road onto a verge filled with paintbrush and set about taking yet more flower photos. The crumbly rockface across the road had patches of penstemon and lupine to add some variety to our floral colour palette. Here it was much warmer, and it would have been easy to spend more time relaxing. But home was calling, and with our usual reluctance, we left the flowers behind and drove on. 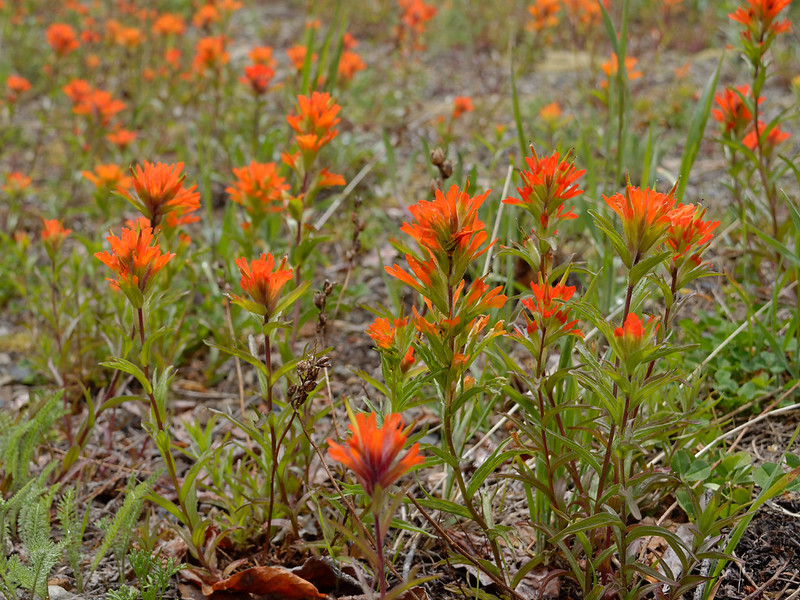 Not quite done, we called in at Rhododendron Flats to check out the flowers there. Check out that post for more pictures and info!