A short loop in the forest best done when the rhododendrons are in bloom, usually June. I’m not much of a rhododendron fan but, as ever, show me a flower in its natural habitat and I’m all over it :-) So I enjoyed it for what it was, but it’s probably not worth stopping at other times of year. The nearby Sumallo Grove of big cedars is more impressive.

The signed pullout at the side of Highway 3 can take about a dozen vehicles. It seems to be a popular rest stop on account of its outhouse and easy pull-in/out off the road. Pulling back onto Highway 3 can be a challenge though, especially heading towards Hope, and requires careful timing and judgement.

The trail is an almost-flat loop barely two-thirds of a kilometre long, and meanders through a pretty dark section of forest, at least on a cloudy day. The trail naturally leads off in an anti-clockwise direction.

Apart from the blooming rhododendrons, we saw some pinesap, twayblade, bunchberry, and the leaves of Queen’s Cup. The pink rhododenrons do stand out nicely against the dark green foliage. Some of the nicest-looking bushes can be seen from the road, though they’re obviously hard to take in! 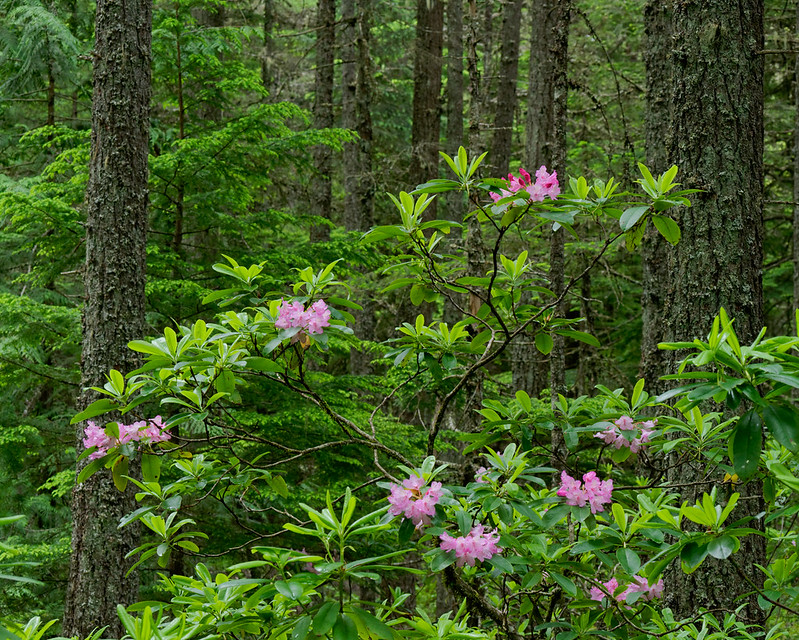 Having just finished a chilly wander around the Paintbrush trail, we drove towards home and pulled in here to have lunch. In all the times we’ve been to Manning Park, we’ve never actually stopped here although we have caught a glimpse of the pink blooms as we sped past. The only other time we’ve seen the rhododendrons was way back in 2010 when we hiked the Skagit River trail.

There’s not much to this story: we walked only a few tens of metres before encountering our first blooms. Despite the low light we were able to make use of a few sturdy trees to lean on and capture a few shots as we walked on round. We took our time, letting our eyes adjust to the darkness of the forest and enjoyed the splashes of colour offered by the rhododendron flowers.

Here and there on the forest floor were other flowers, but the main ones that caught my eye were the pinesap, standing out against the moss with their salmon pink/orange colouring. At some point recently I read someone describe them as shrimp flowers, which is understandable. I wasn’t able to get good photos, but I enjoy remembering they were there so for me it’s always worth at least taking a photo.

Despite our usual photo-taking, we were round the loop within 20 minutes. It almost had the same feeling as a Japanese garden, that same sense of peace and calm reflection, thanks to the soft ground underfoot and the short loop trail. That is, when there was a lull in the traffic! Still, it made for a good stop on our way home, and I was glad we’d finally explored rhododendron flats.

Next stop was the Blue Moose for afternoon coffee and then home.