Opinion
This hike fell out of favour with me for many years, until we hiked it in reverse, leaving the best viewpoint to last. It’s still not my favourite hike, but that could be due in part to the fact it requires a long city drive to get there. But today it was perfect. Most people hiked it the usual way which, when coupled with our late start, meant we had the best view all to ourselves by the time we reached it.

Fact
The trail may be called Diez Vistas, but that does not mean there are ten viewpoints. I’d say that in practice, there are at most only 3 good viewpoints, with one more that has only a tantalizing partial view which, a decade ago, used to offer a clear sightline up Indian Arm.

The trail is in good shape and well-marked. Going counter-clockwise, there is one spot where the marker post could do with a sign pointing to the Diez Vistas trail, but it’s obvious when you look at the back of the post!

Lots of hikers, and lots of (mostly unleashed) dogs though we didn’t experience any wayward canines. We encountered most people along the side of Buntzen Lake, the numbers dwindling as we turned off on the Diez Vistas trail.

It’s getting to that time of year when I can start including a flower report in my write-ups. Yay! Today we saw lots of salmonberry in bloom and patches of bleeding heart here and there. Streambank spring beauty and large-leaved avens were out along the flat portion of the trail just south of the parking lot. Some false Solomon’s seal was flowering in a few places. Starflower leaves (and buds) were abundant and the first saxifrage shoots are growing on some of the mossy bluffs. The cottonwoods and pines were aromatic in the warm sun. Sword and deer ferns are unfurling, and we even found a patch of trillium!

We heard and saw plenty of birds including rufous hummingbirds, chickadees, ravens, varied thrush, grouse, and some woodland birds whose song was familiar but remain unidentified. At one point we heard something that could have been an owl but we’re not sure. 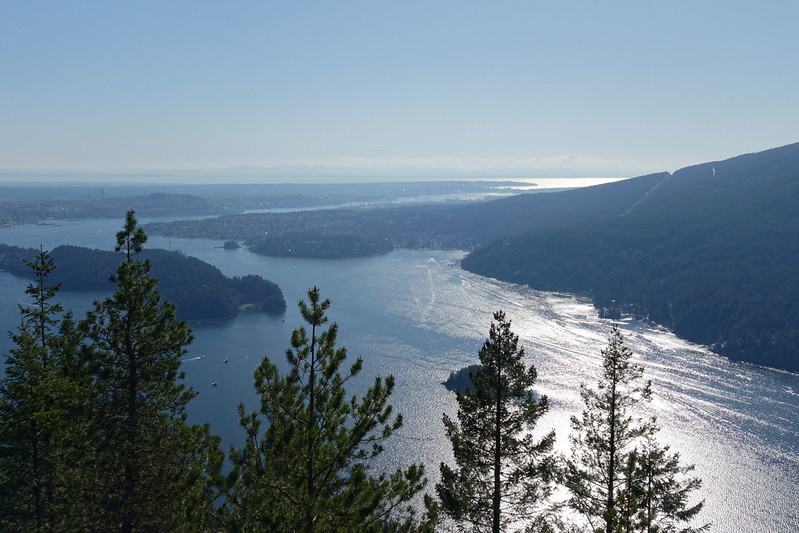