Opinion
I had a dim view of this trail the first time I hiked it back 2006, largely because we were on our way up to the second viewpoint on Sigurd Creek which was a long slog in the trees. But as a trail to visit Crooked Falls it’s actually really quite enjoyable, despite its steepness in places, with some impressive forest and mossy boulders. May is definitely the best time to visit as the falls are in full drenching flood. Just watch your step!

Fact
Wow – has this trail ever become popular! The road was packed with parked cars (including a police car – the RCMP was up there checking something along with the BC fire ranger) and we met probably a dozen or more groups in total. The trail is beginning to show signs of wear and tear from all this extra traffic especially on the steeper sections, but it’s mostly holding up. The way is obvious enough though trail markers are plentiful for guidance, and there’s a sign pointing hikers towards the falls at the junction where the Sigurd Creek trail continues uphill.

The falls are spectacular right now, running as high as I’ve ever seen them. Expect to get you and your camera wet if you venture Getting to the uppermost viewpoint requires some care as it’s a slippery descent, though it was dry today.

The Ashlu River Forest Service Road (FSR) is closed immediately before the first bridge over the Ashlu River, 2 km after turning off the Squamish Valley FSR. The reason isn’t clear to me (I guess I should check on Bivouac) but that bridge now has a notice attached to it warning of a 1 tonne rating, perhaps to discourage people forcing open the gate to drive across. That’s a new development since I was last here in 2014. It’s only a 5 minute walk from the bridge to the turnoff onto the old logging road (which still looks drivable with the right vehicle). Look for an easily-missed sign on the power pole pointing to the Sigurd Trail.

Birds: we heard varied thrushes galore! Woodpecker thudding hard on a tree. Audubon’s or Townsend’s warblers dipping through the undergrowth. There was some bear poop on the bridge. 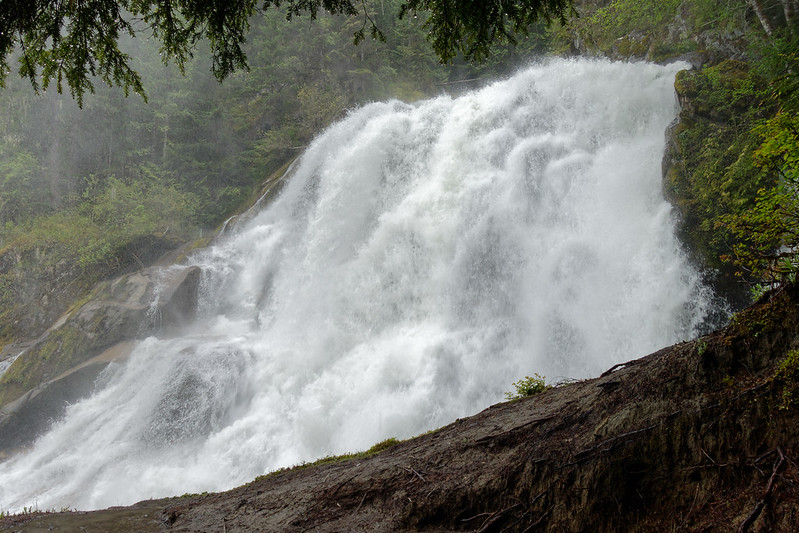